As described in the "Topographical Dictionary of Ireland" by Samuel Lewis, 1837 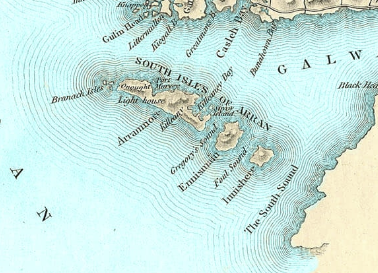 ARRAN ISLANDS, a barony, in the county of GALWAY, and province of CONNAUGHT, 30 miles (W. S. W.) from Galway; containing 3191 inhabitants.

They are supposed to be the remains of a high barrier of land separated at some remote period by the violence of the sea; and from evident appearances of their having been anciently overspread with wood, their retired situation, and the existence of druidical remains, to have been appropriated to the celebration of the religious rites of the early Irish, prior to the introduction of Christianity.

The islands are now the property of the Digby family, of whom the present head is the Rev. John Digby, of Landerstown, in the county of Kildare.

Their appearance, on approaching, is awfully impressive; the dark cliffs opposing to the billows that roll impetuously against them a perpendicular barrier, several hundred feet high, of rugged masses, shelving abruptly towards the base and perforated with various winding cavities worn by the violence of the waves.

Ennismain, or the Middle Island, is separated from Arranmore by Gregory Sound, which is about four miles broad and navigable from shore to shore.

Innishere, or the Eastern Island, is separated from Ennismain by a rocky and dangerous passage, called Foul Sound, which is about a league broad, with a ledge of rocks having on it six feet of water.

To the west of Arranmore are the Branach Isles, two of which, about eight acres in extent, afford good pasturage, and the third is a perpendicular and barren rock of about two acres.

The surface of all the islands is barren rock, interspersed with numerous verdant and fertile spots. There are many springs and rivulets, but these afford in dry seasons a very inadequate supply of water, which is either brought from the mainland for the use of the cattle, or the cattle are removed thither during the continuance of the drought.  The best soils are near the shore and are sandy, with a mixture of rich loam: the prevailing crops are potatoes, rye, and a small kind of black oats; the inhabitants raise also small quantities of barley and wheat, for which they apply an additional portion of sea-weed, their only manure; and they grow small quantities of flax; but the produce of their harvests seldom exceeds what is required for their own consumption. The pasture land is appropriated to sheep and goats, and a few cows and horses, for which they also reserve some meadow: the mutton is of fine flavour and superior quality; but the most profitable stock is their breed of calves, which are reputed to be the best in Ireland, and are much sought after by the Connaught graziers. The grasses are intermingled with a variety of medicinal and sweet herbs, among which the wild garlick is so abundant as to give a flavour to the butter. The plant called Rineen, or "fairy flax," is much relied on for its medicinal virtues in almost all cases; the tormentil root serves in place of bark for tanning; and there is another plant which gives a fine blue dye, and is used in colouring the woollen cloth which the islanders manufacture for their own wear.

The fisheries are a great source of profit, and in the whole employ about 120 boats; of these, 30 or 40 have sails and are from five to ten tons' burden; the rest are small row-boats and canoes, or corachs. The spring and beginning of the summer are the season for the spillard fishery; immense quantities of cod, ling, haddock, turbot, gurnet, mackerel, glassin, bream, and herring are taken here; and lobsters, crabs, cockles, and muscles are also found in abundance. The inhabitants rely chiefly on the herring fishery, which is very productive; and in April and May, many of them are employed in spearing the sun-fish, or basking shark, from the liver of which they extract considerable quantities of oil.

Hares and rabbits abound in these islands, which are also frequented by plovers, gannets, pigeons, ducks, and other wildfowl; and the cliffs are the resort of numerous puffins, which are taken for the sake of their feathers by cragmen, who descend the cliffs at night by means of a rope fastened round the body, and are lowered by four or five of their companions.

In one of the islands, a very fine stratum of dove-coloured and black marble has been discovered; and from the various natural resources of this apparently barren district, the inhabitants are enabled to pay a rental of from £2000 to £3000 per annum to the proprietor.

The most remarkable of the natural curiosities are the three caverns called the Puffing Holes, at the southern extremity of Arranmore; they communicate with the sea and have apertures in the surface of the cliff, about 20 perches from its brink, from which, during the prevalence of strong westerly winds, prodigious columns of water are projected to the height of a ship's mast.

The three islands form three parishes in the diocese of Tuam, and, in respect to their vicarages, are part of the union of Ballynakill, from the church of which they are 28 miles distant; the rectories are impropriate in the Digby family.

In the R. C. divisions they form one parish, which is served by a clergyman, resident at Oaghill, where a chapel, a neat slated building, has been recently erected. About 400 children are educated in four pay schools at Arranmore.

There are still some very interesting remains not only of druidical antiquity, but also of the ancient churches and monasteries.

From the secluded situation of these islands, the language, manners, customs, and dress of the natives are peculiarly primitive; instances of longevity are remarkable. The shoes worn are simply a piece of raw cowhide, rather longer than the foot, and stitched close at the toes and heel with a piece of fishing line.

The Irish language is commonly spoken, and being replete with primitive words, varies from the dialect of the natives of the mainland, but not so as to be unintelligible; a great portion of the inhabitants, however, speak good English.

In the Great Island is a place called the Field of Skulls, from the number of human bones found in it, and thence supposed to have been the site of a battle fought during some intestine quarrel of the O'Briens.