The Assassination of the Third Earl of Leitrim 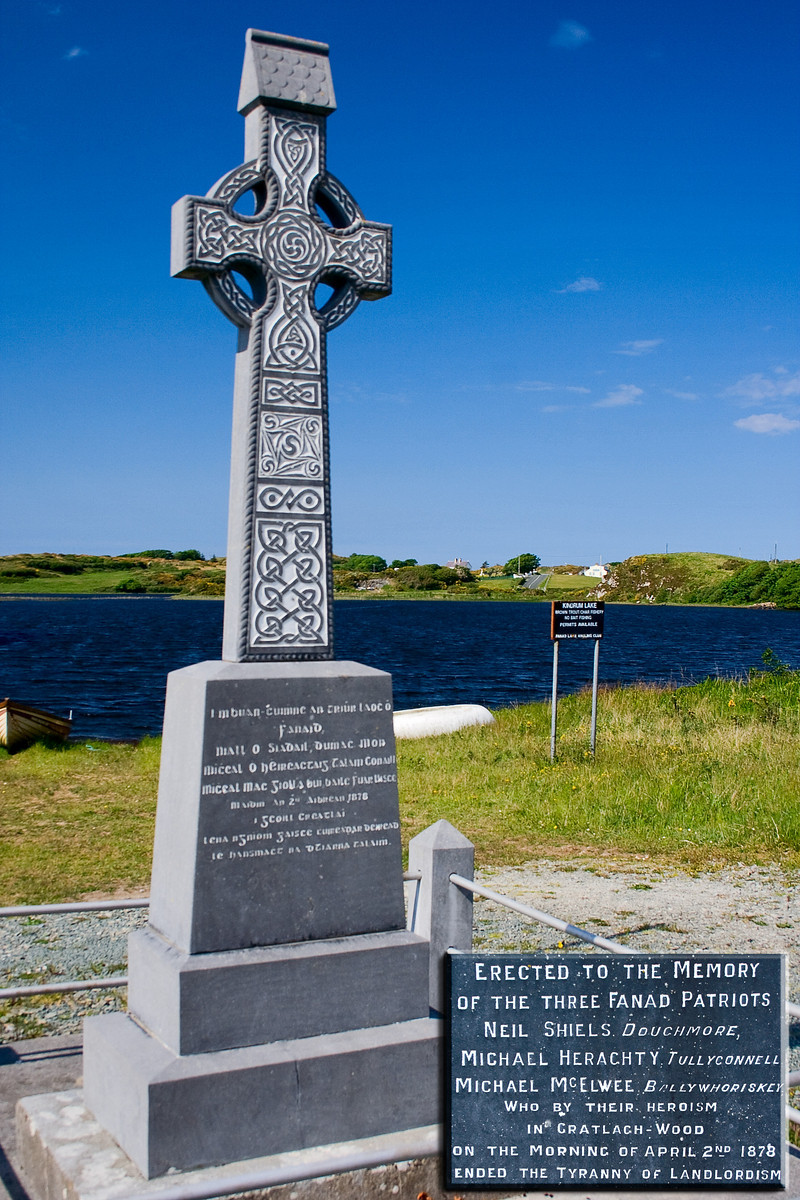 Back in the late 1800s, the Third Earl of Leitrim was one of the most hated landlords in Ireland, and no more so than in County Donegal where he owned 55,000 acres of land. People labelled him a ruthless tyrant for his countless evictions and his attacks on tenants rights and all the while anger was mounting.

Affairs came to a head in April 1878 when the Earl was assassinated on the road between Carrigart and Milford. There was jubilation in Donegal and there were celebrations in Derry too. But the incident sent shock waves across the land and gave rise to one of Ireland's great mysteries - who killed Lord Leitrim and how did they pull it off?

On a Saturday morning in February 1879 as the Strabane train pulled into Derry's GNR railway station on the Foyle Road two passengers jumped out amid cries of jubilation. It was two brothers Bernard and Thomas McGranaghan from Fanad in County Donegal who'd just been set free from Lifford Jail. They'd been detained there almost a year for the murder of the Third Earl of Leitrim but suddenly they'd been released without charge. Now they were in Derry to shop and to celebrate.

A Derry solicitor had represented the McGranaghans and there'd been massive interest in the Leitrim affair here in the City. It probably was no surprise then that as they made their way to the centre of Derry passers-by stopped to shake their hands. Soon a marching band appeared and the two McGranaghans Bernard and Thomas, were hoisted shoulder-high for a parade through the streets.

There was a party atmosphere in Derry that day. Later a massive gathering saw them off at the Lough Swilly station for the trip from Derry to Fanad. But why were the McGranaghans set free and, perhaps more to the point, who did kill Lord Leitim? Even today, well over a hundred years on, many people are not aware of this famous assassination. Certainly while the evidence pointed towards the McGranaghan family involvement in the assassination, everybody knew they hadn't carried out the actual killing.

Massive Estates
The story starts when William Sydney Clements became the Third Earl of Leitrim in 1854. Along with the title he inherited 90,000 acres of land spread across counties Leitrim, Donegal, Galway, and Kildare. Clements had been an army man and it's doubtful if he ever really wanted the title in the first place. But, once in Ireland, he set about upgrading the whole estate.

As a result he began incurring the wrath of just about everyone – his tenants, the Church, the judiciary, even the administration at Dublin Castle. Quite simply he was hated for his rigid, unflinching approach – it was his way or nothing. Lord Leitrim reserved the right to make improvements as he saw fit and those who did not comply, or went about things in their own way, were evicted.

He even went so far as to smooth the legal process of eviction, all his tenants were served notices-to-quit every April (in some instances printed on the back of rent receipts), enabling Leitrim to evict them if he so chose when the notices expired six months later.”

Most hostility against him was centered in Donegal, especially in Fanad where he owned 12,000 acres. Evictions were being carried out and it was only a matter of time before a plot was hatched to assassinate the Third Earl of Leitrim.

History relates that a meeting took place at McGrenaghan's in Gortnatraw North, between two secret organisations based in Fanad. At this gathering plans as to how and where to carry out the killing were drawn up. Then volunteers were chosen and it was only a question of picking the right day.

That day turned out to be Tuesday 2 April 1878. At 8:30am Lord Leitrim set out from his house at Manorvaughan near Carrigart to travel into Milford a distance of about 6 miles. The party consisted of two carriages – Lord Leitrim, his clerk John Makim and the driver Charles Buchanan were in front, while behind were the Earl's valet William Kincaid and the driver Michael Logue. This car was slowed down with a heavy load of the Earl's luggage and by having a lame horse

Unknown to Lord Leitrim and his accompanying men, three men, now known to have been Michael Heraghty from Tullyconnell, Michael McElwee from Ballywhoriskey (who was known as Mickey Rua) and Nial Sheils of Doaghmore, armed with muzzle loading guns, had crossed Mulroy Bay to Rossguill by boat and were lying in wait for Lord Leitrim to pass by 7am that morning.

During the journey, Leitrim's carriage sped ahead but when they were about three miles from Milford at Cratlath wood in Woodquarter on the shore of Mulroy Bay this carriage was ambushed by two men.

The first Kincaid (who was in the second carriage) knew of the incident was a report from a volley of several shots before him on the road. Looking towards the sound, he saw jets of smoke from the guns. The carriage man Charles Buchanan had been shot in the head and died immediately. He fell to the road, his horse rug still around his knees. John Makim the clerk, was also shot in the head but managed to stumble back towards the second car. He died later.

Lord Leitrim never got a chance to get to either of the two guns he carried. One of the first shots hit him in the right arm, fracturing his elbow joint and he took nine or ten bullets in the back of his left shoulder. He fell to the ground and the horses galloped away. Leitrim, struggled with his attackers. Kincaid, saw the Earl grappling with a man who had a red beard (Michael McElwee).

As he watched the second attacker (Neil Shiels) came from behind and brought the butt of a gun down on Lord Leitrim's head, shattering his skull. Although Neil Shiels and Michael McElwee were certain he was dead, to be sure, the disposed of his body, face down in in a water-filled hole found nearby.

Having killed the three men they then ran to the shores of Mulroy Bay to a waiting boat, Kincaid reported watched them pull hard from the shore and disappear across the bay.

Leitrim was dead and the news hit Ireland like an earthquake.

The Catholic Church and the newspapers immediately condemned the killings without reservation and a massive manhunt was set in motion throughout Donegal. One significant clue was a tuft of red hair found in Lord Leitrim's clenched hand – it had been torn from his assailant's beard in the struggle.

There was little doubt among the tenantry about who the actual assassins were, but no one informed the police. Immediately after the murder, each of the conspirators went back about their daily business. McElwee was to be seen soon afterwards constructing lobster pots and Shiels went back to his tailor shop. Heraghty went to the house of some friends where he had a meal of tea and eggs.

At the murder scene reports of evidence lay everywhere – a pistol, a red gunstock, a poteen bottle and, most incriminating of all, a scrap of paper that had been used as gun wadding. When this was examined it turned out to be a page from a child's exercise book and writing on the paper led the constabulary to a Mary McGrenaghan, a pupil in Cashel Glebe National School. As a result of this the McGranaghan brothers were immediately implicated.

Also the broken gunstock was the evidence provided proof against one of the actual conspirators, Michael Heraghty. As it happened, Heraghty had left the scene earlier to follow a pedestrian who had passed the three as they took up their positions on the road. Suspecting that the passer-by might have noticed something amiss and afraid that he might warn the authorities in Milford, Heraghty was chosen to shadow the man and ensure he proved no threat. He left his gun behind and it was this that McElwee used to inflict the fatal blow. Why the small, wiry twenty-year-old Heraghty was chosen to leave is a mystery. Of the three, he was reputed to be the best shot, a skill he refined through his main occupation, poaching.

All three above were committed for trial in July 1878 and were detained in Lifford Jail.

The evidence was not strong enough to convict the McGranaghans and they were eventually would be released the following February.

However Michael Heraghty died of typhus while in jail in October 1878. Although Heraghty was only a “journeyman tailor”, some 3,000 mourners wearing green rosettes, led by 20 cars and followed by 200 horsemen, met his cortège as it entered Fanad.”

During the initial court proceedings it was revealed that Lord Leitrim's police escort had not arrived at Manorvaughan to take him to Milford on the morning of the fatal shooting. Later it was discovered that the clocks in the house had been put forward so that Lord Leitrim was on the road an hour earlier than he should have been. So there was inside help at Manorvaughan. It also appears that the second carriage carrying the butler had been deliberately slowed by maiming the horse – this isolated Leitrim up ahead and left him an easy target.

So everything pointed to meticulous planning on the part of the assassins and it seems that every man, woman and child in Fanad might have information but a code of silence ensured that the names were kept secret, and for those few who may not have maintained silence through camaraderie and principles there was an unspoken deterrent—the plot was known to be conceived and carried out by local Fenians and Ribbonmen.

In the 1960s, (70 years later) it emerged that information had, been eventually gained by the Lord Lieutenant's man (for seventeen shillings), that had identified Mickey (Rua) McElwee, Neil Shiels the tailor, and Michael Heraghty but also confirmed that the meetings to plan the assassination had taken place in Thomas Sarah McGrenaghan’s house in Gortnatraw North, and that McElwee and Shiels had stopped at Anthony McGrenaghan’s house to change their clothes on their return to Fánaid; the McGrenaghans were related ‘by marriage and also by blood’ to McElwee and Shiels.

What had been done on receiving this information – it had been filed away in Dublin Castle and was never referred to. The truth was, Lord Leitrim was mourned by neither tenants nor peers and his killers were lauded as heroes who ended the tyranny of landlordism in Ireland.

Leitrim’s death was widely viewed as the only remedy available to a downtrodden persecuted tenantry who could stand the strain no longer.
In Donegal, the assassination was considered a pivotal point in the fight for Home Rule. It is also seen as the inspiration behind the founding of the Land League in 1879 the following year.

The Fanad Patriots as they became known were not officially identified for many years.
80 years later in 1960 a memorial Celtic Cross was erected at Kindrum and the identification of the men involved in the killing was finally official .

"The Outer Edge of Ulster: A Memoir of Social Life in Nineteenth-Century Donegal" by Hugh Dorian, Breandán Mac Suibhne

Photo:The Cross at Kindrum erected in memory of the men who killed Lord Leitrim