Awful extermination of tenantry at Ballinlass

When it came to profit, grazing cattle was more lucrative than having tenants. Having lived in Ballinlass for generations, reliably paying rent, was of no consequence; Marcella Netterville Gerrard, was hell-bent on clearing her land. On this fateful morning, 67 ‘comfortable, clean, and neatly kept habitations, with snug kitchen gardens either before or behind them’ were demolished and all 447 inhabitants of Ballinlass 'scattered over the neighbourhood, residing in the ditches or anywhere they can find shelter’... 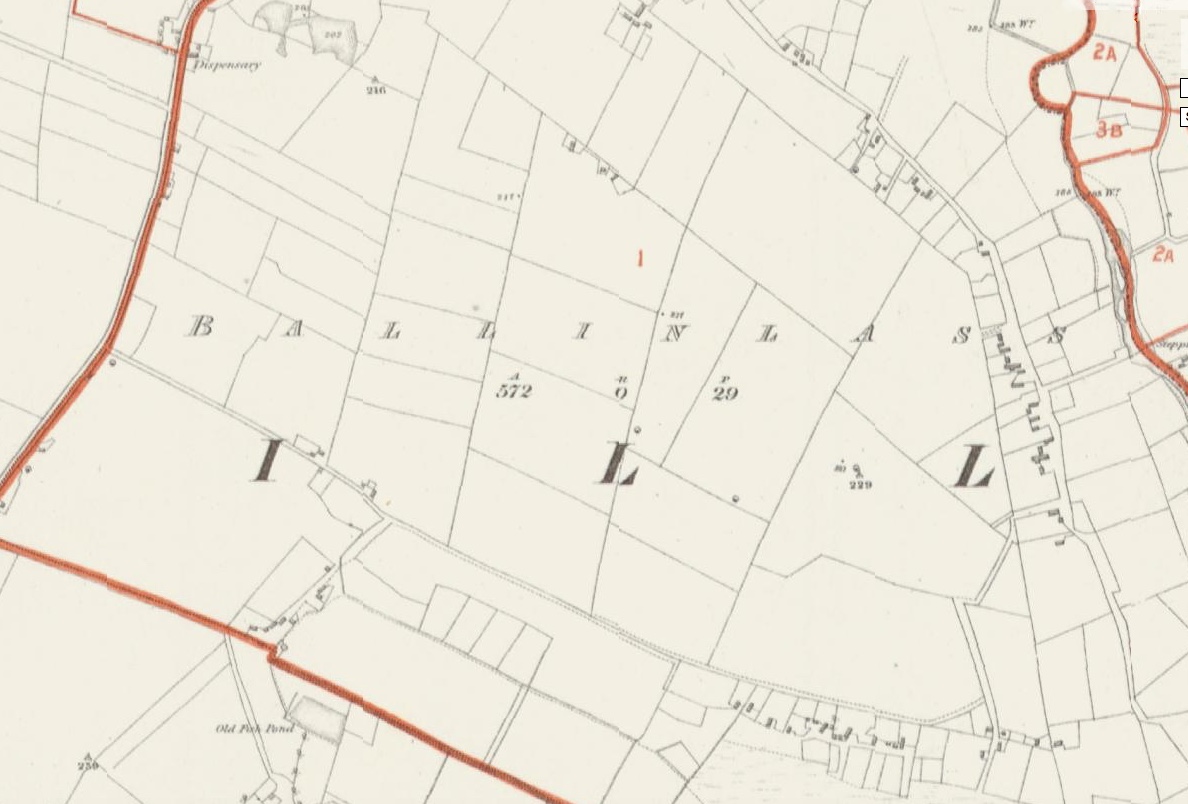 The townland of Ballinlass (civil parish of Ballynakill) near Mount Bellew Co Galway, suffered one of the Great Famine's most notorious incidents.  It was the single most merciless eviction Ireland had seen at the time, especially as the tenants had been paying their rent in full and on time. Universally condemned, it caused shock and disbelief even among the landlord class.

On Friday the 13th of March, 1846, shortly after dawn, a party of bailiffs consisting of "12 carts, each having four men as levellers, and in each cart a supply of spades, pick-axes, and crow-bars, brought out with the military and the police" arrived at ‘the place marked out for destruction.’

Despite the tenants' protestations and insistence that they had their rent money ready for payment (their repeated efforts to pay their rent having been refused) the soldiers and police began systematically to demolish all 67 homes in this townland. The only resistance was the sounds of men cursing, children screaming with fright, and the wild wailings of the women as they clung to the doorposts ‘from whence they were dragged by the bailiffs’. Scattered among the ruins were items of broken crockery, household furniture, cooking utensils and farming implements. The stick-and-blanket shelters some had erected the night before in anticipation, were also torn down. The people were driven out on to the roads. That night some returned and erected crude shelters against the remaining walls of the cottages. The bailiffs returned the next day and completely destroyed all trace of the cottages (including the foundations). They were left with no recourse but to spend the weekend sheltering in the ditches, huddled around fires in "parties of ten to fifteen".

The Roscommon Journal was first to report the incident...

To add to the misery of the wretched peasantry of this unfortunate country, the landlords are ably contributing to their bitter draught. Day after day we hear of families, aye, hundreds of wretches turned to die in the ditches by their heartless oppressors, the landlords of this country. Not later than yesterday, we are told Mrs. Gerrard dispossessed not fewer than four hundred and forty-seven wretched beings-turning them upon the world and razing their huts to the earth. A poor man whose family was lying in fever implored to have the walls of his cabin left up in order to shelter them-but to no purpose. A poor woman with her child at her breast, was not even allowed time to quit her domicile, and in the act of running out a beam fell, and, we are told, killed the infant in her arms. If we are correctly informed, Mr and Mrs Gerrard have dispossessed upwards of two thousand human beings within the last few years.  CORRECTION 26 March: We cannot omit correcting an inaccuracy which occurred in our last publication, relative to a child having been killed at the wholesale extermination of Mr Gerrard; the child still lives, we also forgot stating that the poor wretches had their rents in their hands, and implored the military officers, who commanded the detachment, on the sheriff, to receive it, and not remove them.

I regret to find that your paper, in general so remarkable for accuracy, contains some errors, of detail, in reference to the recent eviction of tenantry by Mr. Gerrard, as the clearance did not take place in this county, nor, to the best of my belief, have either Mr. or Mrs. Gerrard any property in any part of this county, nor within some miles of its frontier. Mr Gerrard resides at Gibbstown, in the county of Meath and is a man of large property and a very extensive grazier; he is not a Catholic, but a very anti-Catholic, gentleman.

— Mrs Gerrard has a large estate in her own right, as heiress of the Netterville estate, in the county of Galway. It is said that she manages it exclusively herself, without reference to Mr. Gerrard, and I have heard, from good authority, that she has, from time to time, evicted fully one thousand families. In the late clearance which took place within a mile of Mount Bellew, upwards of two hundred families were dispossessed.

It also said, that Mr. or Mrs. Gerard (or both) have an uncontrollable fancy for converting tenanted lands into pasture, although this must cause a good deal of trouble, and cannot yield much profit. The best excuse for such a fancy is, that it is a species of "monomania,” as, indeed, I believe that it is.

The Freeman's Journal sent their journalist for a full report.

The Times of London commented ‘ shows the sublime indifference to social considerations of which no one but an Irish landowner is capable.’

On April 3 1846 the Belfast Newsletter reported that the story was ‘perfectly correct and the numbers dispossessed by no means exaggerated ...In a state of misery not to be described, scattered over the neighbourhood, residing in the ditches or anywhere they can find shelter’.

SEE:  mountbellew.com  and LANDLORDISM IN IRELAND. LETTERS ON THE EVICTION OF THE GERRARD TENANTRY