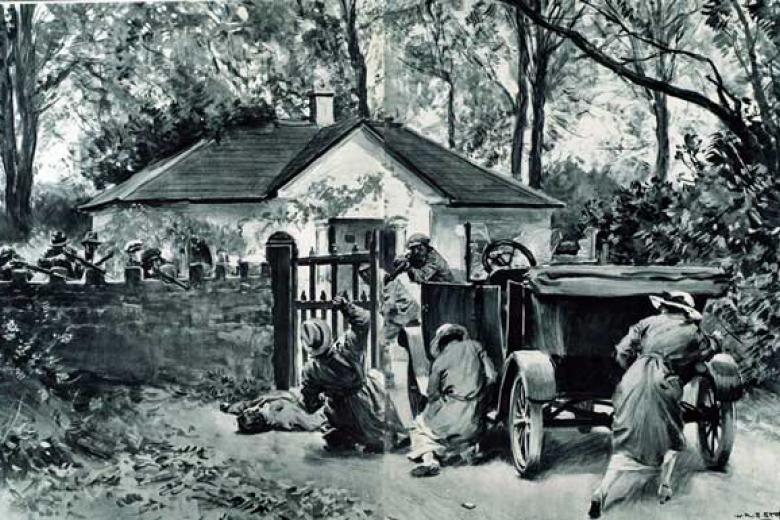 The 4 witness statements available from the men who actually took part in the ambush say that local IRA was too badly equipped to attach the strong Crown Forces patrols. But one day a local person saw a military-looking man on horseback come out of Ballyturn House, and from the description, they believed him to be D I Blake. The man had built up a very bad reputation for himself in the district. Threatening women with his revolver in the homes of wanted men. And going into the shops in the town and throwing his revolver on the counter with a demand to be served at once. His wife also carried a revolver and when shopping threatened those serving her at the counter that if anything happened to her husband she would shoot and burn the town. This would be the first Saturday in May 1921. The next day the weekly Sunday intelligence report said that Blake drove a Mrs de Blaquire home from Gort to Tubber on Saturday evenings. So the next Saturday they did reconnaissance and the car duly passed along the road, and they were able to get a good look at Blake to get a precise identification. They then heard that the Bagots at Ballyturn House were having a party the following Sunday, the IRA put the clues together and believed that Blake would attend that party at Ballyturn and laid plans to ambush them.

The IRA group got into position at about 1 pm and saw Blake arrive, so they knew he was in the house. They took over the gate lodge and made any passers-by prisoner in it (17 in all) until Blake's car was seen about 8.30 pm. There are Witness Statements from, which I have read

Blake's car left Ballyturin House in the early evening. In the car were:

The car drove down the long drive to the gate. When they got there, one of the gates (the left-hand gate) was closed, unbeknown to them this was a ploy by the IRA ambushers to get the car to stop. So they stopped their car at the gate, to open it. It was at this point that they were ambushed by a group of 20 IRA men.

Mrs Gregory got out of the car on the side facing the IRA ambushers, and they believe that this saved her life, as they then left her alone. She worked her way round to the back of the car. And was led back towards the house by some of the IRA men after the firing stopped. She was handed over to the younger Bagot daughter, who then looked after her. Vere R T Gregory, in The House of Gregory (Dublin: Browne and Nolan), pp. 92-95.' According to Gregory, the ambush was retaliation for an incident in which soldiers or police had tortured three local men for information, by forcing them to dig their own graves and then threatening to bury them alive.  Gregory mentions being told by his stepsister that it was rumoured in the vicinity that Lady Gregory had conspired with the IRA in planning the ambush, and this was why her daughter-in-law had survived. This is an unsubstantiated rumour and is unlikely to be true, merely the sort of gossip that circulated in the area.

Blake, Mrs Blake, and Lt.McCreery appear to have been killed without firing a shot. The IRA men then moved in and removed the guns of their victims.

The Bagots, who were the owners of Ballyturin House, when they heard the shooting, ran down the long drive to the gate. Mrs Gregory was handed over to Miss Molly Bagot. Although Molly Bagot knew Ryan and Glynn well, she told the inquiry that she did not recognise any of the men. John Bagot was held at gunpoint and handed a note which apparently read: 'Volunteer HQ. Sir, if there are any reprisals after this ambush, your house will be set on fire as a return. By Order IRA.' John Bagot, died on the 27th April 1935. His wife, Anna lived until 17th January 1963. She died in London aged 96 and was buried at Gresford Church near Wrexham, North Wales. Ballyturin House was abandoned and fell into a total ruin.