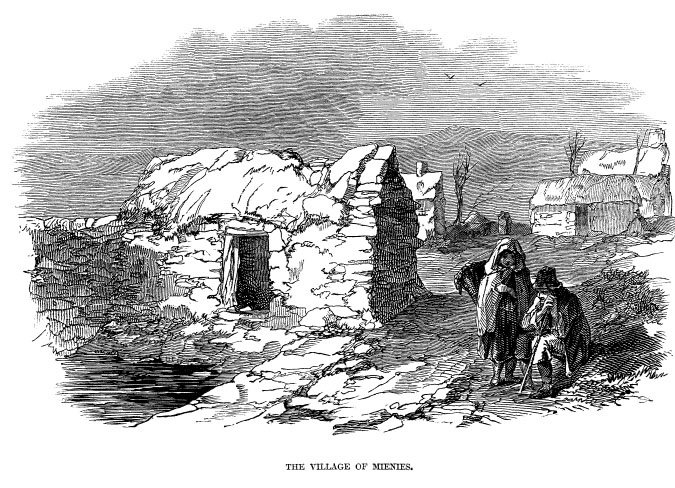 With the object of ascertaining the accuracy of the frightful statements received from the West, and of placing them in unexaggerated fidelity before our readers, a few days since, we commissioned our Artist, Mr James Mahoney, of Cork, to visit a seat of extreme suffering, viz., Skibbereen and its vicinity; and we now submit to our readers the graphic results of his journey, accompanied by such descriptive notes as he was enabled to collect whilst sketching the fearful incidents and desolate localities; premising merely, that our Artist must already have been somewhat familiar with such scenes of suffering in his own locality, (Cork), so that he cannot be supposed to have taken an extreme view of the greater misery at Skibbereen

“Having returned to Skibbereen, my next object was to seek out the truth of the following extract from Dr Donovan’s Diary, as published in the Cork Southern Reporter, of Jan. 26:–

“‘A man of the name of Leahey died in the parish of Dromdaleague about a fortnight ago; his wife and two children remained in the house until the putrescent exhalations from the body drove them from their companionship with the dead; in a day or two after, some persons in passing the man’s cabin, had their attention attracted by a loud snarling, and on entering, found the gnawed and mangled skeleton of Leahey contended for by hungry dogs.'”

“This, I need not tell you, I looked upon as designed for an effect; and so I started for Dromdaleague, to reach which we had to pass through the miserable parish of Cahera, where, unless something be done for the poor, and that quickly and effectively, the result will be awful.”

Here the report must terminate for the present. Next week we shall complete our painfully interesting series of Illustrations.      // SOURCE Illustrated London News - Saturday 13 February 1847

We resume from our Journal of last week our Artist’s Sketches of Scenes and Incidents from the distressed district of Skibbereen, and its neighbourhood; premising that our main object in the publication of this Series of Illustrations is to direct public sympathy to the suffering poor of these localities, a result that must, inevitably, follow the right appreciation of their extent and severity. We left our Artist, last week, on the road to Dromdaleague, to inquire into the horrible circumstances of Leahey’s death.

The first Sketch is taken on the road, at Caheragh, of a famished boy and girl turning up the ground to seek for a potato to appease their hunger. “Not far from the spot where I made this sketch,” says Mr. M., “and less than fifty perches from the high road, is another of the many sepulchres above ground, where six dead bodies had lain for twelve days, without the least chance of interment, owing to their being so far from the town.

After leaving this fearful spot, we soon reached Dromdaleague, where I called upon the Rev. J. Creedon and inquired of him as to the fate of Leahey. ‘Not only do I know the statement to be true,’ replied the reverend gentleman, ‘but I also prepared the man for death, and am ready to accompany you to the spot.’ We, accordingly, started; and, within half an hour’s drive, reached the village of Meinies (Moyny), where the house of Leahey is situated, and of which I send you a sketch. Whilst making this, I learned from Mr Creedon, and one of the villagers, that not only was the account of Leahey’s house in the Diary true but the case was even more disgusting than there stated; and, horrifying as it was, the man’s mother, who found the dogs about him, after having first lain him across the few remaining sparks of fire upon the floor, went out to beg as much as would purchase a coffin to bury him in.”