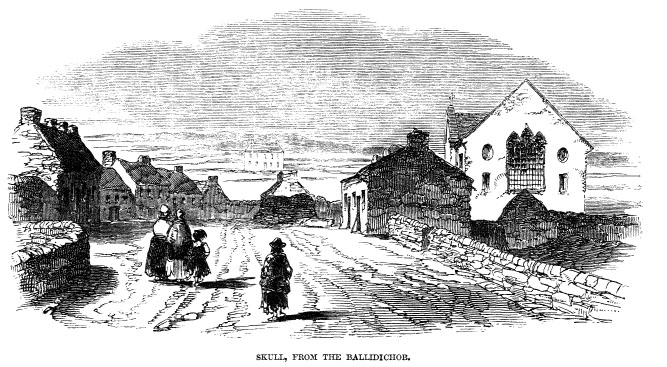 With the object of ascertaining the accuracy of the frightful statements received from the West, and of placing them in unexaggerated fidelity before our readers, a few days since, we commissioned our Artist, Mr James Mahoney, of Cork, to visit a seat of extreme suffering, viz., Skibbereen and its vicinity; and we now submit to our readers the graphic results of his journey, accompanied by such descriptive notes as he was enabled to collect whilst sketching the fearful incidents and desolate localities; premising merely, that our Artist must already have been somewhat familiar with such scenes of suffering in his own locality, (Cork), so that he cannot be supposed to have taken an extreme view of the greater misery at Skibbereen.

“We next got to Skull, where, by the attention of Dr Traill, vicar of the parish (and whose humanity at the present moment is beyond all praise), we witnessed almost indescribable in-door horrors. In the street, however, we had the best opportunity of judging of the condition of the people; for here, from three to five hundred women, with money in their hands, were seeking to buy food; whilst a few of the Government officers doled out Indian meal to them in their turn. One of the women told me she had been standing there since daybreak, seeking to get food for her family at home.

“This food, it appeared, was being doled out in miserable quantities, at ‘famine prices,’ to the neighbouring poor, from a stock lately arrived in a sloop, with a Government steamship to protect its cargo of 50 tons; whilst the population amounts to 27,000; so that you may calculate what were the feelings of the disappointed mass.

“In my way out of the town, I made the accompanying Sketch (above); and, here, again, I had an opportunity of witnessing the efforts of the Vicar’s family to relieve the afflictions around them; and we met his daughters returning from their work of charity in the poorest portion of the town.

A specimen of the in-door horrors of Scull may be seen in the annexed sketch of the hut of a poor man named Mullins, who lay dying in a corner upon a heap of straw, supplied by the Relief Committee, whilst his three wretched children crouched over a few embers of turf, as if to raise the last remaining spark of life. This poor man, it appears, had buried his wife some five days previously, and was, in all probability, on the eve of joining her, when he was found out by the untiring efforts of the Vicar, who, for a few short days, saved him from that which no kindness could ultimately avert. Our Artist us assures that the dimensions of the hut do not exceed ten feet square; adding that, to make the sketch, he was compelled to stand up to his ankles in the dirt and filth upon the floor.

“I have thus,” observes Mr. M., “been lengthy in my details in order that you may be as well informed upon the subject as I can enable you to be; and, bearing in mind the horrifying scenes that I have just witnessed, I entreat you to do the best you can for so much suffering humanity; as this visit to the West will, I trust, assist in making this affliction known to the charitable public.”