The Blockade of the Neptune

Throughout the years of the Great Famine, several convict ships left Irish shores for the colonies. This is the story of one ship that was bound for South Africa but would only ever get within sight of its destination. 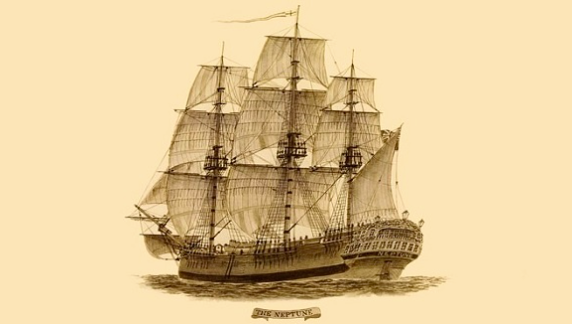 In September 1849, a ship called The Neptune anchored within sight of Cape Town, South Africa. The Neptune was a convict ship carrying some 282 prisoners and 55 crew. The intention was for the prisoners to be set to work in Cape Town on a number of building projects. However the people of Cape Town had other ideas. Prejudices against the prisoners meant that the local people were against allowing convicts into their town. So strong was the opposition that a vast number of them signed a petition against the establishment of a penal colony and shunned those who refused to sign it. As a result The Neptune could not come in to dock and the crew and prisoners were stuck in the bay for 5 months. One man who took pity on the occupants of the ship was an Irish man from Ballinastanford near Claremorris Co. Mayo. His name was Robert Stanford (1806-1877). He was a prominent land owner in the area, having made his fortune as a soldier. As tensions escalated in Cape Town, Stanford sent relief to the people onboard The Neptune, an action which saw his entire family shunned in the community. After 5 long months of a stand-off it was realised that the people of South Africa would not relent and The Neptune departed for Tasmania. Stanford was lauded by Queen Victoria for his actions and received a knighthood in 1850. He would later pen a memoir entitled Loyalty and its Reward recounting the shameful treatment of him and his family during the blockade of The Neptune.