The Execution of Oliver Plunkett

In June 1681, Oliver Plunkett was tried and found guilty of treason and 'promoting the Roman faith'. For this, he was hanged, drawn, and quartered on July 1st 1681. Nearly 300 years later, Plunkett was beatified and canonised becoming the first of the Irish martyrs to become a saint, and the first new Irish saint in about 700 years. 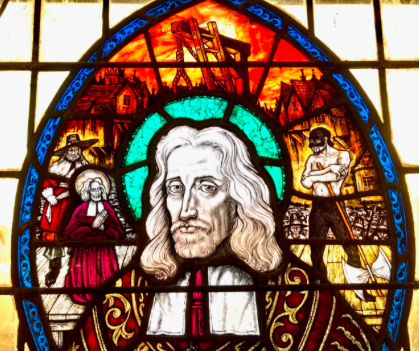 Born in Loughrcrew, Co. Meath, Oliver Plunkett was an Irish Roman Catholic clergyman who would rise to become the Archbishop of Armagh, making him the Primate of All Ireland.

In 1678, the British government was in a frenzy of anti-Catholic sentiment over a conspiracy called The Popish Plot. The plot consisted of an allegation from a man named Titus Oates that there was a group of Irish Catholics who were plotting to assassinate King Charles II. Though Oates was eventually proven to be lying, it was not before the conviction and execution of 22 men, including Oliver Plunkett.

Plunkett was arrested in Dublin in 1679 and imprisoned in Dublin Castle. The charge against him was treason. His particular involvement in the plot was said to be an attempt to bring 20,000 French soldiers into the country for an invasion, and the levying of men for taxes in support of a rebellion. He was moved to a London prison for his trial, which was conducted before an all-Protestant jury. The trial was a farce with Plunkett being denied legal counsel, and his accusing witnesses being convicted criminals. He was not allowed enough time to gather his evidence and was hastily convicted of treason and sentenced to death, a ruling which has since been denounced by legal professionals. Though Plunkett, as an Archbishop, was undeniably guilty of 'promoting the Roman faith', there was neither proof nor evidence that he had ever conspired to harm the King.

In spite of several pleas to save him, Oliver Plunkett suffered a traitor's death as he was hanged, drawn and quartered at Tyburn on the 1st of July 1681. He was 55 years old. After his initial burial in two tin boxes, Oliver Plunkett's remains were later exhumed and brought to various locations in England, Rome, Germany, and Ireland. In 1921 his head was brought to Drogheda, Co. Louth where it is venerated to this day.

In 1920 Oliver Plunkett was beatified, and in 1975 he was canonized. In 1997 he was made the Patron Saint for peace and reconciliation in Ireland. He is remembered in Ireland today by a number of churches, streets and schools which are named after him throughout the country.