In the summer of 1822 a bad potato crop and limited employment opportunities created famine conditions in the west and south-west of Ireland. The partial failure of the potato crop in 1821 precipitated a food crisis, with extreme distress occurring in 9 counties from late April until mid-August 1822. In the month of July alone, over one million poor people in counties Cork, Kerry, Limerick, Clare, Galway, Roscommon, Sligo, Leitrim and Mayo, were estimated to be living on the verge of starvation in the month of July alone. Starvation and typhus caused deaths in many parts of the countryside and rural towns. 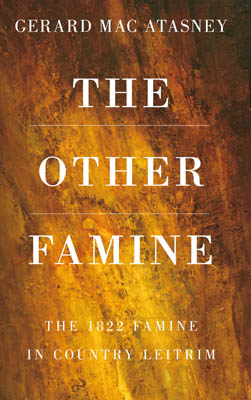 DISTRESS IN IRELAND. The following is the substance of the Reportof the Dublin Mansion House Committee : —

CORK — Extract of a letter from George Crofts, Chairman of the Central Committee (city of Cork), states, "that on the 4th of June, it appeared from the reports laid before them from near 100parishes of the county, and from calculations made in the remaining ones, that not less than 92,800 persons were at that period in the most urgent distress; and from the returns and statements laid before the Committee on the 11th of June, it appeared that the number of persons in actual want had amounted to 150,000.

CLARE— A letter received on Saturday last, from Ennis, contained the afflicting account, that a man, his wife, and nine children, all perished for want of food.

ENNISTIMON, June 25.— This parish is inhabited by the raost wretched class in society, there is not an individual among them able to call the attention of any Committee to their melancholysituation; and unless something is done to afiord them immediate relief, it is my firm conviction that more than half the parish will fall a victim before the 15th of July.

MAYO— From the Rev. Henry Peasley, Union of Ballyhane. 15th June, states, that in the three parishes there are 9,750 individuals, that in addition to the want of food, spotted fevers, and dysenteries had broken out. From the inadequacy of supply, several of the poor creatures lay all night in the Church- yard, unable to move from pain and hunger, eating the raw meal and potatoes.

—Parishes of AGHAMORE and KNOCK, June 19. — The poor wholly destitute, having exhausted the cresses, nettles, and wild herbs in the fields.

—BALLYHAUNIS, June Many of the starving creatures drop down at the place of distribution. The fever increases. Three died last week, and one last night.

— Parishes of Ivehan and KILCUMMIN, June 22.— Fever, dysentery,  and starvation are fast spreading.

—BINGHAM CASTLE, June 21.— I assure you that thousands have for weeks past subsisted upon sea-weed, wild vegetable substances, and rotten fish, which has brought on a typhus fever and a violent dysentery. lf we have not speedy relief the living will scarcely be able to bury the dead— for instance, about two days ago, four men could not be collected to bury a poor creature that died of want of food; they are swelling and getting black in the face, and no medical assistance nearer than Ballina or Castlebar.

SLIGO— Easkey, June 17.— The scenes we witness are appalling, nothing presents itself but famine and disease.

From the Bishop of Killala, Edward Wingfield and William Browne  Union of Castleconer and Ballyglass.— The population is 8,270 persons, approaching a state of starvation —many are unable to get money for seed potatoes; for the last two months the people have lived on shell-fish, sea-weed, and herbs.

TIPPERARY— Cloghprior, June 22.— Owing to the very few resident Gentry in the country, our Subscription in this Parish has not amounted to 50l., which went a very short way in  relieving upwards of 2,000 famishing souls, nearly the one-fourth of whom are now in the fever.