An Irish Coercion Bill was introduced by Sir Robert Peel to calm the "increasingly difficult situation" in Ireland as a result of the Great Famine of 1844–1847. 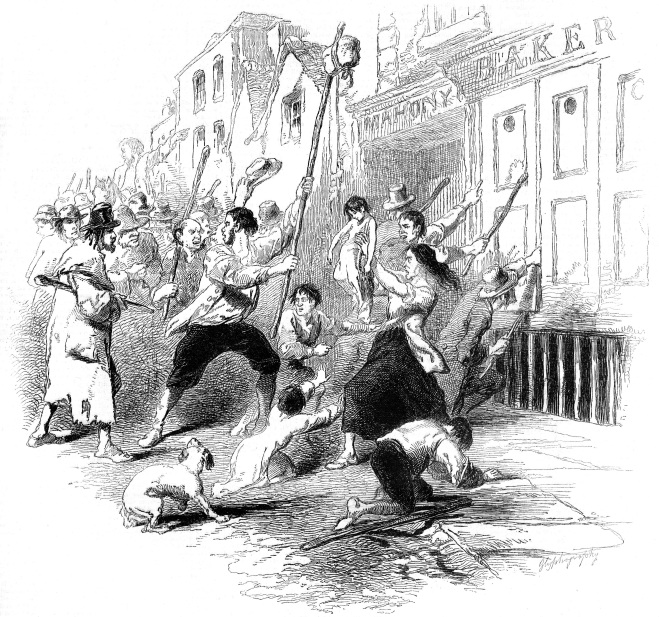 The privy council sat to-day, at the Castle of Dublin, the Lord-Lieutenant presiding, when the proclamation bringing the Coercion Act into immediate operation in the disturbed districts was adopted unanimously. The following members of the council were present, in addition to the president: Sir William Somerville, Bart, Sir Edward Blakeney (the Chief Justice of the Queen's Bench), Mr. Justice Moore (late Irish Attorney-General), Baron Richards, Baron Lefroy, Judge Ball, Mr. Keatinge (Judge of the Prerogative Court), the Recorder, the Attorney- General (Mr. Monahan), the Marquis of Headfort, the Marquis of Clanricarde, Lord Cloncurry, Sir Thomas Esmonde, Bart., &c. Thus Lord' Clarendon has not lost a single moment in putting forward the powers of the law for the suppression of crime, giving strong proof thereby of his determination to maintain the character for vigour which Lord John Russell gave him.

the Evening Post gives the following list of places agreed to be  proclaimed; the act to be in force from and after the 29th December:

The county of Limerick;

the county of Tipperary;

the baronies of Bunratty, Tulla, Islands, Inchiquin, and Clonderlaw, in county Clare;

the baronies of Clonliih, Ballybrit, Eglish, and Garrycastle, in King's County;

the baronies of Athlone, Ballintobber, Roscommon, Ballymoe, Boyle, and the parishes of Creeve, Kilmacumsy, Kilnamanagh, and Kilcolagh, in the barony Frenchpark, county Roscommon;

the baronies of Leitrim, Mohill, and Carrigallen, county Leitrim;

and the baronies of Longford, Granard, and Ardagh, county Longford.

The principal effect of this measure will be, adds the Evening Post, to prevent persons in those districts carrying arms without license after December 29. We have no doubt that in those districts where the possession of arms indiscriminately, even in dwellings, is considered dangerous to the public peace, the powers of the act for calling in arms will be made use of—and then no person will be allowed to have arms, even in his dwelling-house without a license. We understand the stipendiary magistrates will be the parties empowered to give licenses.

Another decided step has been taken to put down crime. Precepts have already issued to the high sheriffs of the counties of Limerick and Clare, and the county of the city of Limerick, for special commissions to be held in the ensuing month. Tuesday, the 4th of January, is fixed for the county and city of Limerick, and the 11th for Clare. The chiefs Blackburne and Doherty will preside, and the crown will be represented by the Attorney and Solicitor General. The number of prisoners on trial for the county of Limerick are 124, of whom the majority, perhaps 100, will be tried. It has excited some surprise that the city should be subjected to such an extraordinary tribunal when there are only three persons for trial. The cause is quite sufficient. The gaol delivery may extend to the city well as the county, and there is no reason why the murderers of Mr. Hill should not be brought to as speedy a trial as any other felons.

After a rapid despatch of business in Limerick and Clare the commissioners will travel towards the north and south ridings of Tipperary, and having done good work there, cross the island, and settle on the plains of Roscommon.

To remedy a great inconvenience in the detection of offenders a considerate journal suggests to the authorities that well-appointed jaunting-cars, after the Bianconi model, capable of carrying six constables, should be ready at every police station. A musqaetoon from a neighbouring hedge, or over an high wall, would soon stay the progress of the curricle, and spill out the special messengers of justice.

The Mayor of Limerick has received a communication from tiie Under-Secretary relative to the floating docks. Mr. Redington states that the Lord-Lieutenant has obtained a report from the Board of Works, to the effect that a contract has been executed for the completion of the docks before September, 1849 ; but, in consequence of some re-measurements, the works have been delayed. They commence immediately.

All Connaught is rushing towards the out-door relief. Thirteen hundred were added on one day to the list of the Castlebar union, and yet the multitude are numerous and clamorous as ever.

The Ranger supplies the following, which illustrates very forcibly one of the effects of the land revolution, through which the Irish peasant is now passing:— We hear of persons, hitherto looked upon as good tenants, having tendered possession to the managers of the Castlebar estate, which tenders have been refuted. We have it also upon undoubted authority, that several tenants upon the Breaffy estate, and the estates adjacent, have tendered their holdings to the proprietors, order to come under the relief test. We have likewise the authority of a Roman catholic clergyman for stating that in the electoral divisions of Balla and Drum 93 families had given up houses and lands, and made application at the poor house in this town, for in or out-door relief. This it an awfu state of society—and yet those are facts applicable to every electoral division in the union of Castlebar.