The Flight of the Earls

The small fishing town of Rathmullan in County Donegal witnessed a key event in Irish history - the end of the old Gaelic order. From this spot on the 04th of September 1607 a small ship left for Spain. On board were the chieftains of some of the leading Gaelic families of Ulster, including the O'Donnells and the O'Neills.
. 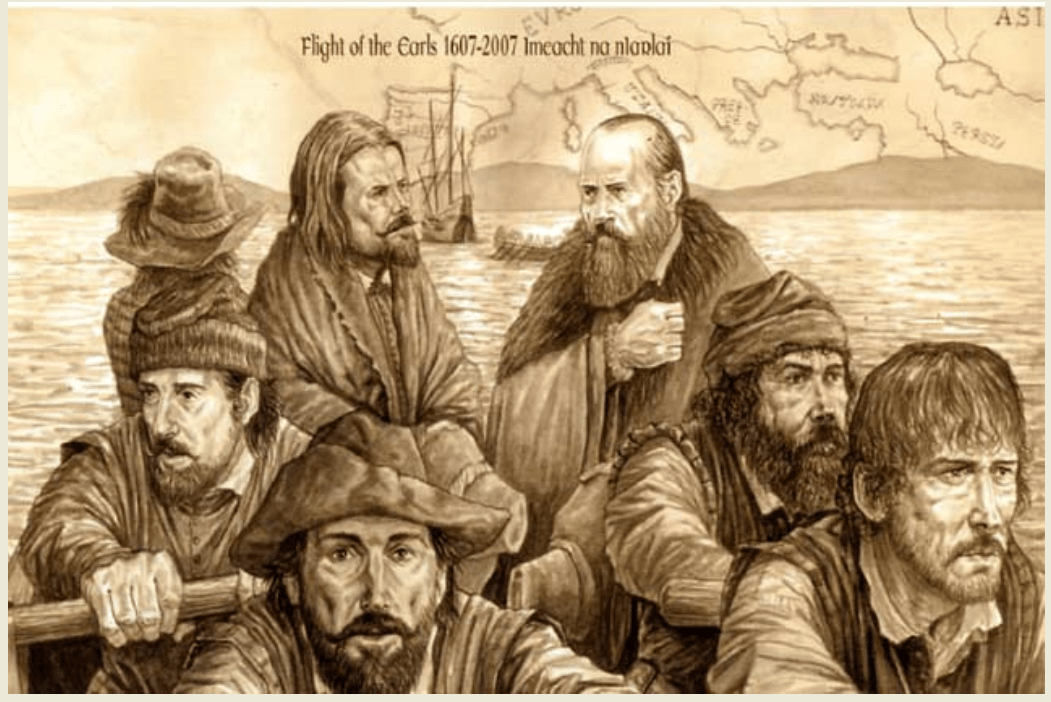 Those chieftains who could not live with the new English order sought refuge with England's main enemy, with the hope either of making a new life for themselves, or of living to fight another day. How did they come to be here, and why did they leave?

In one final attempt by the old order to reverse the tide of English power a decade or so earlier, an army was organised by Hugh O'Neill, chief of Tir Eoghain, and Red Hugh O'Donnell, chief of Donegal. They began a series of battles with the English which came to be known as the Nine Years War. After strenuous efforts on their part, the Gaelic chieftains secured a promise of support from the leading continental power of the day, Spain. To meet up with the Spanish army, however, O'Neill's and O'Donnell's force had to march the length of the country to Kinsale on the south coast.

There they fought and lost the landmark Battle of Kinsale, which ended the old Gaelic political and cultural system. Red Hugh made his way to Spain to try to inject new life into the alliance but died in the Castle of Simanacas a little over a year after Kinsale. He was succeeded as chieftain by his brother Rory O'Neill.

Why did they leave?

Many things had changed in Ulster in the late sixteenth and seventeenth century. The land had been ravaged by war; disease and starvation had cut the population drastically. English troops were stationed in forts across the province. Scottish planters were being located in parts of Antrim.

Many English soldiers and officials, including the new Lord Deputy, Sir Arthur Chichester, were hoping to gain large tracts of land for themselves. Others, like law official Sir John Davies felt that not enough effort was being made to bring English customs to the area. In letter after letter to Queen Elizabeth, they accused Hugh O'Neill of Tyrone, frequently referred to as "that traitor O'Neill," of disloyalty to the Crown.

His traitorous behaviour was reflected in his attitude to the old practice of surrender and regrant. The same men egged on minor chieftains like the O'Cahans to make claims against O'Neill and O'Donnell for their lands. This constant harassment wore down O'Neill, so he decided to seek military help from Catholic Spain. He joined Ulster lords O'Donnell of Tyrconnell, and Maguire of Fermanagh, who were taking ship in Lough Swilly to go to seek Spanish aid. On September 14th, 1607, with ninety-nine people on board, a ship commissioned by Cuchonnacht Maguire sailed from Portnamurray Bay, Rathmullan to the continent.

Shared on IrelandXO by: