On this day the Giants Stadium at New Jersey was a sea of Irish tricolours and the scene of great jubilation as Ireland's soccer team beat Italy for the first time. Italy was a favourite to win the tournament and it was expected that they "would play Ireland off the pitch". For Ireland, it was the most glorious outcome imaginable. 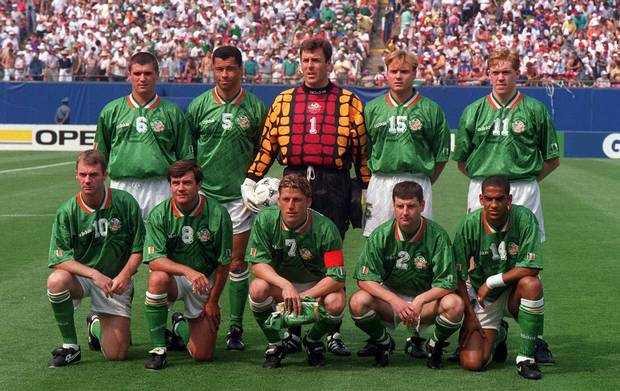 To this day Paul McGrath's brilliant performance in defence (in spite of a shoulder injury) is remembered as one of the most iconic performances in the history of Irish sport.

"Big Paul McGrath showed all the qualities demanded of us for half an hour in Giants Stadium that day. For him the word big is appropriate. Known for his poise, his ability on the ball, his unique gift for reading the game, Paul displayed these qualities on this day. One other huge asset was his courage. When the Italians did get sight of the goal, Paul presented a final, insurmountable obstacle. Paul inspired us as much as in the end he demoralised Roberto Baggio and the other Italian players " Source: Roy Keane - Autobiography.