As described in Samuel Lewis' Topographical Dictionary of Ireland 1837. 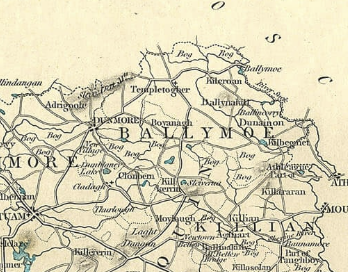 KILCROAN, a parish, in the barony of HALF-BALLYMOE, county of GALWAY, and the province of CONNAUGHT, 11 miles (N. W. by W.) from Roscommon, on the road from that place to Dunmore; containing 2329 inhabitants.

This parish comprises 3875 statute acres, as applotted under the tithe act, exclusively of a large quantity of bog, and contains Glinsk, the seat of Sir John Burke, Bart.

It is a vicarage, in the diocese of Elphin, forming part of the union of Donamon; the rectory is impropriate in Lord Ranelagh, and the tithes amount to £106. 15., which is equally divided between the impropriator and the vicar.

In the R. C. divisions, it is the head of a union or district, called Glinsk and Kilcroan, including the parishes of Kilcroan, Ballynakill, Ardclare, and Oran, and containing chapels at Glinsk and Ballymoe.

About 20 children are educated in a public school, and about 50 in a private school; there is also a Sunday school.

TUBBER or TUBBER-ROE is a village in the parish of KILCROAN 5 miles (S. W.) from Ballymoe, near the road from Dunmore to Roscommon; containing 141 inhabitants. Here are the ruins of an ancient abbey.