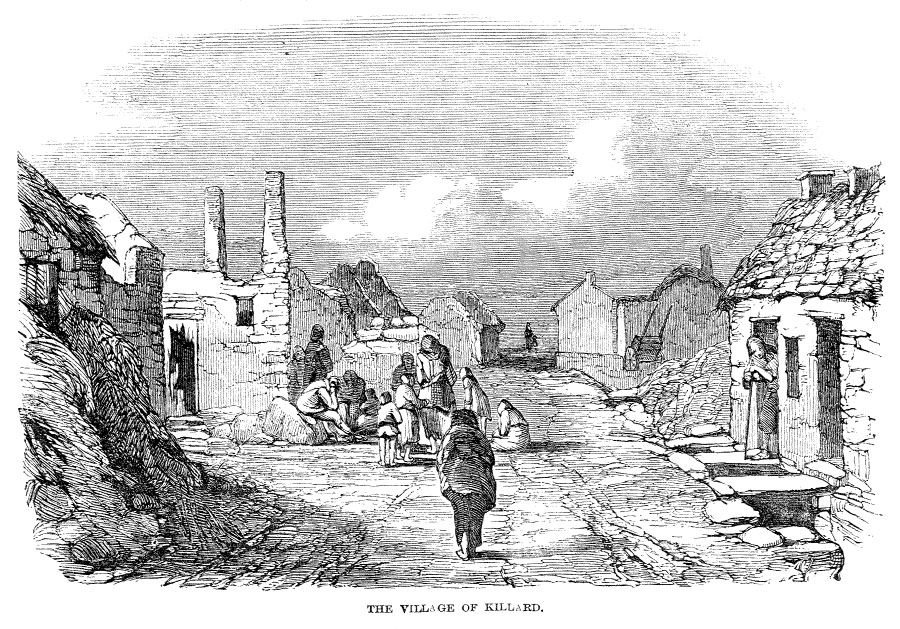 I intended my last communication to be the conclusion, but, on looking over my portfolio, I find another Sketch or two – one of which, at least, you may think worthy of being published.

The village of Killard forms part of the Union of Kilrush and possesses an area of 17,022 acres. It had a population, in 1841, of 6850 souls, and was valued to the Poor-rate at £4254. It is chiefly the property, I understand, of Mr John MacMahon Blackall, whose healthy residence is admirably situated on the brow of a hill, protected by another ridge from the storms of the Atlantic. His roof-tree yet stands secure, but the people have disappeared. The village was mostly inhabited by fishermen, who united with their occupation on the waters the cultivation of potatoes. When the latter failed, it might have been expected that the former should have been pursued with more vigour than ever; but boats and lines were sold for present subsistence, and to the failure of potatoes was added the abandonment of the fisheries. The rent dwindled to nothing, and then came the leveller and the exterminator. What has become of this 6850 souls, I know not; but not ten houses remain of the whole village to inform the wayfarer where, according to the population returns, they were to be found in 1841. They were here, but are gone forever, and all that remains of their abodes are a few mouldering walls, and piles of offensive thatch turning into manure. Killard is an epitome of half Ireland. If the abodes of the people had not been so slight, that they have mingled, like Babylon, with their original clay, Ireland would for ages be renowned for its ruins; but, as it is, the houses are swept away like the people and not a monument remains of a multitude, which, in ancient Asia or in the wilds of America, would numerically constitute a great nations.

May I, in conclusion, remind your readers that the class of men in whose name, by whose bidding, and for whose supposed advantage all this ruin has been wrought, are still blindly treading in the same path. They are even now taking counsel together, to compel the wretched beings left on the land to seek the means of subsistence from the soil they monopolise. Their hope is, to keep up rent; the effect of their wishes, were they embodied into law, would be to continue extirpation. A fall of price, and a decay of rent– the necessary consequences of suspending labour and getting rid of consumers– have lessened their incomes, and to gross ignorance of the effects of legislation, are now added decay and anger. It is estimated that the value of property rateable to the poor has fallen from upwards of £13,000,000 to less than £9,000,000 in three years, while all the obligations of the landowners are undiminished, and, in many cases, increased. Some great proprietors have been already sold up, and many of those who escape that degradation will only retain nominal possession of their domains. Under such circumstances, it may be expected that the landowners will struggle desperately, but they will struggle in vain; for, in extirpating the people, instead of aiding and encouraging their exertions, they have snapped the sinews of their own strength.

But I must leave this painful subject. The worst, it may be hoped, is passed. Though legislation can only help the people by undoing this its work, and setting them free, it is not in human nature to perish without a struggle. The land is still here, all the elements of wealth are still in existence; public attention is intensely directed to social phenomena; opportunities of improvement, as they arise, will be embraced; and landlords, farmers, peasants, and priests will each do something to help themselves, and will promote the prosperity of all.

The late dreadful lesson has given them dear-bought knowledge; suffering has made it a part of their existence, and they cannot get rid of it if they would. For those who have outlived famine, and legislation more desolating than famine, brighter prospects are dawning, but they can only be secured and enjoyed by their own exertions. To grow in prosperity, the Irish must not be continually deceived by a false reliance on those who have hitherto deluded them, and who are even now claiming all the credit of the improvement that is forever springing from the struggles of individuals to better their condition.