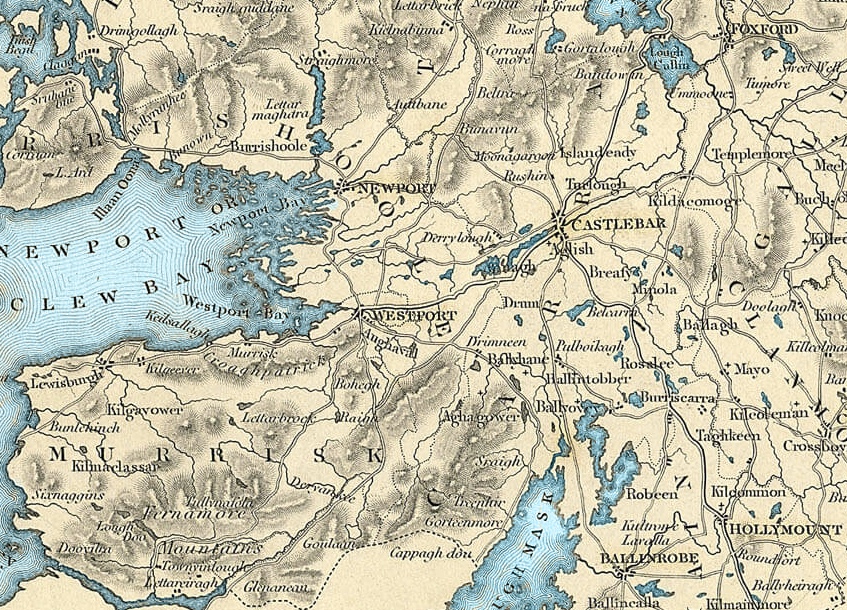 AUGHAVAL, or OUGHAVAL, a parish, in the barony of MURRISK, county of MAYO, and province of CONNAUGHT; containing, with the market and post-town of Westport, 13,921 inhabitants.

This parish is situated on the bay of Westport, and on the road from Castlebar to Lewisburgh; it is partly bounded by the celebrated mountain of Croagh Patrick, and comprises 26,748 statute acres, as applotted under the tithe act, and valued at £7017 per annum.

Besides the market at Westport, fairs are also held there and at Murrisk.

The living is a vicarage, in the diocese of Tuam, with the vicarages of Aughagower, Kilmaclasser, and Kilgavower united by act of council, constituting the union of Aughaval, otherwise Westport, in the patronage of the Archbishop; the rectory is appropriate to the archdeaconry of Tuam and prebend of Killabeggs.

The R. C. parish is co-extensive with that of the Established Church: there are three chapels, one in Westport, which is spacious and ornamented with a handsome front; the other two are at Thornhill and Drummin, and are new slated buildings, but quite inadequate to the accommodation of their respective congregations.

There are places of worship at Westport for Presbyterians and Wesleyan Methodists, the former in connection with the Synod of Ulster and of the third class.

At Westport are four free schools and an infants' school, in which about 330 boys and 200 girls are taught; and there are also 17 private schools, in which are about 860 children.

There are some remains of an ancient abbey at Murrisk, and in the parish are some chalybeate springs.

A large patron is held annually at Murrisk on the 28th of August.

~ Was your ancestor from this district or emigrate from here during the Great Irish Famine?