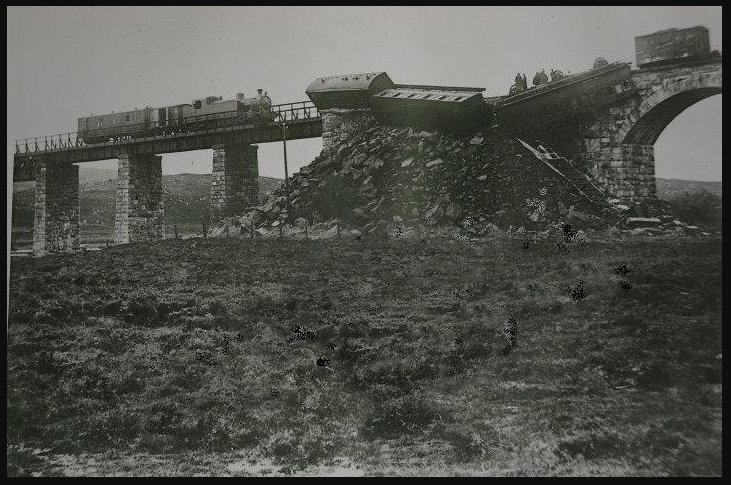 Disaster occurred on the night of 30 January 1925 at around 8pm at the Owencarrow Viaduct, Donegal. Winds of up to 120mph derailed carriages of the train off the viaduct causing it to partially collapse. The roof of a carriage was ripped off throwing four people to their deaths. On that evening, an engine pulling two carriages, one wagon, and a combined van, was travelling on the Londonderry and Lough Swilly Railway Burtonport Extension, opened in 1903.

During the time the line had been open, there had been no serious accidents, and only two mishaps which resulted in fatalities. However, Owencarrow Viaduct was known to be dangerous in bad weather, and heavy winds were being experienced on that night. The train approached the viaduct, which was from 400 to 440 yards in length, at a speed of about 10 miles per hour. The 14 passengers had been enjoying the journey, having left Kilmacrenan Station at 7:52 pm, running only 5 minutes late.

The Great Gust of Wind.

The driver had observed nothing unusual as he approached the viaduct – only that it was a very stormy night. When the train was a little more than 60 yards onto the viaduct, there was a great gust of wind, which lifted the carriage next to the engine off the rails. The driver applied the vacuum brake and stopped the train. When the train came to a halt, the back carriage, which had been lifted off, had carried the wagons halfway over the wall of the bridge. The other carriage was lying over the embankment, the covered wagon was lying over the coping, and the six-wheeled passenger carriage was tumbled upside down.

Only One Passenger was Unhurt.

The gust of wind had lifted two of the large coaches from the rail and flung them top downwards on the parapet. Their roofs were smashed and by the violence of the impact, passengers were hurled from the carriages into the valley below. The masonry of the parapet gave way beneath the shock and stress, and masses of it thundered down upon the injured passengers. Despite all this, the engine kept the rails, and the couplings held, suspending the upturned coaches across the parapet. Of the 14 passengers, only one was unhurt – a Miss Campbell was flung from the upturned carriage, then deflected from the course followed by the other falling passengers, landing on soft and boggy soil, sinking knee-deep into it.

James McFadden, Kilfad & Pat McFadden, Terlin – their bravery was recognised at the inquest, for rescuing two women from a carriage hanging over the edge of the viaduct

Rev Father Burns, CC Doe and the Rev J Doherty, Letterkenny – were early to the scene and attended to the wounded.

The inquest on Philip Boyle and Una Mulligan was opened Saturday, 31 January, by the Coroner, Dr. JP McGinley, at the licensed premises of Mr. Bradley, Falcarragh. Dr. McGinley also opened an inquest on Neil Duggan at his residence in Meenbunone. The inquest on Mrs. Boyle was held by the Deputy Coroner for East Donegal, Dr. Walker, at Letterkenny Workhouse. The proceedings consisted of the formal identification of those killed in the train crash. The inquest was then adjourned until the following Friday, 6 February, at Creeslough. At the conclusion of the inquest, the jury found that death in every case was due to the injuries received. They added, as a rider, their unanimous opinion that if a properly constructed rail had been carried along the whole length of the viaduct, from cutting to cutting, and without an intervening gap, no lives would have been lost. They were also of the opinion that the driver, firefighter, and guard were not in any way to blame.