The Poor Law in tatters 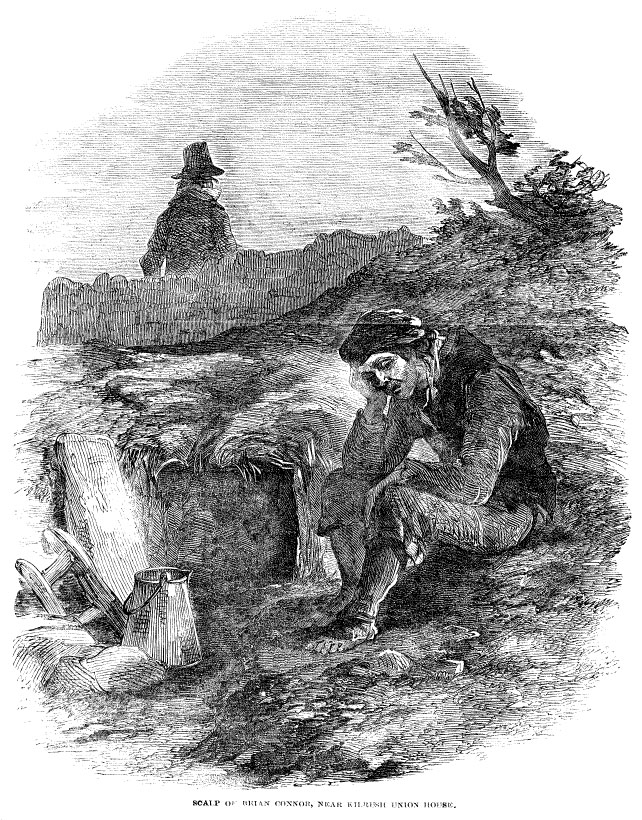 THE LAW, which many of the priests and people sought to make “as expensive as possible” to the landlords, fell heavily on them. A proposition, made in the progress of the bill, to subject mortgages to the rate, was of course scouted; and thus the landlord had to pay the half-rate on the whole of his rental, while the larger part of that, in many cases, went to the mortgagee. The authors of the bill looked to the landowners for the improvement of the land, but the measure crippled their resources. Dublin production was needed; the law diminished production; and the owners, from the blindness of avarice, and the haste with which they carried out the evictions, helped to injure themselves. But the law incited them to do wrong and took away the means by which they might have repaired some of the damage. Thus it did mischief to the landowner as well as the occupier. What good could it do– as it diminished the quantities of food– to those who were neither owners, not occupiers?

However industrious and energetic the Irish may be when removed from the incessant control, dictation, and restraint they are subject to in Ireland, there is abundant testimony to show that at home they have no superfluous energy and industry. The condition of their country is unanswerable proof. Writing about 1725, Swift describes the native Irish as giving themselves wholly up to idleness, nastiness, and thieving. “Even farmers,” he says, “who pay great rents, live in filth and nastiness upon buttermilk and potatoes, without a shoe or stocking to their feet, or a house so convenient as an English hog stye.” It is the usual practice,” he says, “of an Irish tenant, rather than want land, to offer more for a farm than he knows he can ever be able to pay, and in that case, he grows desperate and pays nothing at all.” Bishop Berkeley, writing in 1749, said, “The house of an Irish peasant is the cave of poverty. Their fields and gardens are a lively counterpart of Solomon’s description in the Proverbs. ‘I went,’ said that wise King, ‘by the field of the slothful and by the vineyard of the man void of understanding, and lo! it was all grown over with thorns, and nettles had covered the face thereof, and the stone wall thereof was broken down.’ You often meet whole families in a drove without clothes to cover or bread to feed them, both of which might be easily procured by moderate labour.”The negroes in our plantation have a saying, that if negro was not negro, Irishman would be negro. The very savages of America are better clad and better lodged than the Irish cottagers throughout the fine fertile counties of Limerick and Tipperary.” So he asks in his “Querist,” “Whether the bulk of our Irish natives are not kept from thriving by the cynical content in dirt and beggary which they possess to a degree beyond any other people in Christendom.” Coming down to our own times, Captain Kennedy, in his reports and letters from Kilrush, published by the House of Commons, describes both landlords and tenants as unfit for energetic exertion. “The peasant’s life was passed in planting his potatoes in the spring, digging them up in autumn, and dozing through the winter over the turf fire which cost him nothing.” The instant a misfortune fell upon him he was destitute and helpless. “Again,” he says, writing on April 6, 1846, “improvident, ignorant, thriftless parents, scarcely human in habits and intelligence only, present themselves with nine or ten skeleton children when they themselves can no longer support the pangs of hunger, and their children are beyond recovery. . . . . Hundreds of instances occur where an acre of land worth 15s. is let for £3 . . . . . In default of payment, the occupiers are bound to give 140 days’ labour during spring and harvest, which, at 8d. a day, amounts to £4 13s. 4d. . . . . 100 or 120 days’ labour is given for a cabin worth 7s. 6d. a year. . . . . The half-witted occupiers” he says on April 13, 1848, “are too often deluded by the specious promises of under-bailiffs, and induced to throw down their own cabin for a paltry consideration of a few shillings, and assurance of out-door relief.”

I might quote much more testimony to the same effect, but this will satisfy every candid mind that the condition of the Irish has been for a long period similar to their present condition. They are thriftless and improvident beyond example. In their own country, at least, they have long been deficient in energy to help themselves. The Poor-law, by pretending to provide for them, justified and promoted their indolence and improvidence. Between them, too, and the landlords, there was a hereditary feud; and when they were told they were to be maintained at the expense of the landlords, they had the strongest motives to indulge in laziness. The law pandered to all their hereditary vices; it declared them entitled to be maintained at the expense of those whom they regarded as oppressors. Like the others, they did not know that the law would ruin the occupiers, or their own people, as well as the foreign and Protestant landlord. They thought only of its letter and hastened to indulge in laziness at the landlord’s expense. It became popular to sneer at industry. The law diminished the motives for that essential virtue, while it ruined the little occupiers, and impoverished the landlords. For eight years it had been in force before the potato rot came, which only made manifest its terrible effects on the possessions, habits, and minds of the people. The law, replete, as I have very briefly endeavoured to point out, with the most disastrous effects, was advocated with the very best intentions by leaders of all parties. Sir Robert Peel described it as demanded by public opinion. We are, however, well aware that universal approval is no index to the effects of a law. Most certainly it did not elevate the Irish. It did not save a single life nor solace a single misery. It served only a few officials. It added amazingly to the number of the destitute, and it helped to degrade the people almost past the hope of recovery.

All these and many similar effects resulted from the Poor-law of 1838; and no words can characterize the fright-begotten, principle-forgetting law, to extend out-door relief to the Irish, passed by the present Ministry in 1847. I believe all reflecting politicians who found their science on principle, in preference to passion– and all isolated and single present facts are interpreted by us with passion, and therefore partake of its character– condemned the mode in which the Ministry dealt with the calamity of 1846. They at once induced the people to give up the cultivation of the soil, and so increased the mass of destitution that nothing appeared feasible to its terrified authors, except to substitute for their misplaced charity, out-door relief. The law of 1847 was only the extension of the law of 1838, but its effects have been more destructive of life than the worst pestilence we read of in history. It is well characterized by the statement, “that the peasantry will pull down their own cabins for an assurance of out-door relief.” We are told, in more than one union, that the majority of the applicants are “the holders of small farms, which they relinquish to obtain relief.” The law substituted dependent pauperism for honest industry and made it the actual rule of conduct in the greater part of Ireland. If it is criminal to ordain and encourage vice, then is the British legislature the most criminal body in existence.

Its imbecility, indeed, equals its criminality. It is impossible to carry the law into execution. In several instances it has been of necessity suspended; in several others, the Government has carried out the law by grants of public money; and in several unions, at this moment the rates cannot be collected, and relief is refused for want of means to give it. Should it be said that the recent seasons are entirely exceptional, I might dispute the statement; but I can safely allege that an enactment that is fit only for fair weather may be caprice– a spirit of good temper– a little misplaced benevolence– but is not a law. At this time Kilrush and several other unions are bankrupt. In 1848, twenty-one unions expended in all, under the direction of the law, £508,829, and could collect only £198,556; the Government and the British Association supplied the remainder. According to a Parliamentary paper, the estimated demand on those twenty-one unions for 1849 was £568,829 and the utmost rate which could be collected was not expected to produce more than £273,481. Without Government or charitable aid, the law would be a nullity. In the union of Milford, Donegal, out of a population of 38,108 persons, only 779 men and 287 women were employed– about one in thirty-eight. No poor-rate levied on the industry and property of that union could possibly support the population. similar facts are true of every part of Ireland, and the law would be only an imbecile farce if it were not more terribly ruinous than it is ridiculous.

I should now say a few words on the probable means of helping the Irish; but the length of this communication, the many suggestions that are before the public, and the excellent recommendations of Mr Bright, command me to stop. From the conspicuous failure of the Poor-law, which had a benevolent origin, and was almost universally approved of, I dread the responsibility of helping forward the mighty mischief– the ruin of a people– by an injudicious recommendation. I must avoid adding to the confusion that already exists, by refusing to increase the many nostrums by which it is expected Ireland may yet be redeemed. One remark only will I make.

Nearly all the circumstances of which Mr Bright justly complains– “entails,” “primogeniture,” “heavy stamps and difficulties in disposing of land,” “insecurity for tenants,” “imperfect representation of the people,” an “incongruous Church establishment”– exist, or did recently exist, in Great Britain, so far as the enactments in the statute-book are concerned, just as they exist in Ireland. In spite of them, however, and not in consequence of any legislation, the English have worked out their own advancement. For years past, instead of taking the law from the Legislature, they have in fact imposed the law on it. The Legislature has only given a technical form and dress to the will of the people. It is far less the law, therefore than the difference in energy and knowledge, which causes the might difference in prosperity between Great Britain and Ireland. Consulting history, and in particular the economic history of our own country, during the last century, I cannot find any example of national prosperity, and the increase of national wealth produced directly by the acts of the Legislature. On the contrary, I see the rise of our chief manufactures, the improvement of our agriculture, the progress of knowledge, and the rapid march of invention have all ensued in spite of its acts, which, manifested as exorbitant Customs and Excise duties, Stamp duties, and Corn-laws, have one and all been impediments to the national progress. Our immediate improvement, and our great hope for the future, are based on having recently got rid of a law. I, therefore, cannot expect, like Mr Bright, any improvement for Ireland from the hand of the Legislature. Laws are of inconceivably small importance compared to the spirit of the people who have to administer and submit to them. The improvement of Ireland, therefore, must come from the Irish themselves; and the best we can expect from the legislation is, that it should, as far as it can, and as rapidly as convenient, undo the work it has done in Ireland.