On the 3rd of April 1900, Queen Victoria made her fourth and final visit to Ireland. 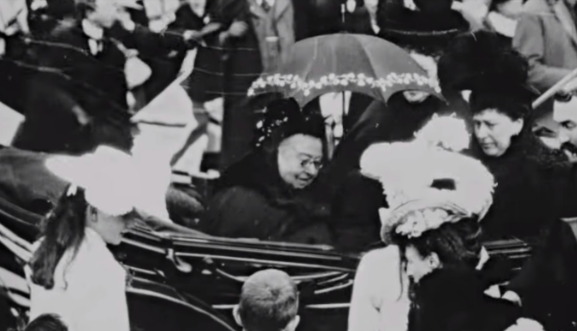 Queen Victoria had previously visited Ireland in 1849, 1853, and 1861. On these occassions she had been accompanied by her husband and consort Prince Albert. This time she came as a widow in mourning. This visit differs from others in that it occured during the age of photography. This has provided us with evidence of the large crowds that came out in the streets to welcome the monarch to Ireland. Though sceptics have suggested that the visit was merely a recruitment tour for the Boer War, the volume of people cheering for the Queen shows that there was a surprising amount of support for the monarch.

The Queen travelled from Dún Laoighaire to Phoenix Park and was accompanied by military bands. The longest of her visits to Ireland, Victoria spent three weeks in the capital. The Queen died the following January bringing to an end the longest reign of a British monarch until her great great grandaughter Elizabeth II.