The Siege of Drogheda 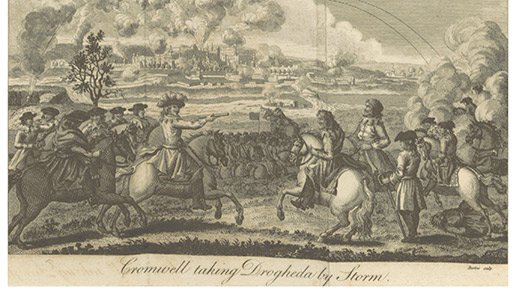 The Siege of Drogheda took place from the 3rd to the 11th of September 1649.

It began when Oliver Cromwell and his troops of 12,000 men arrived in Drogheda on the 3rd of September. He used ships to block the harbour, and had troops stationed at vulnerable points in the city's walled defences.

An onslought of artillery created two breaches in the walls. The people of Drogheda were offered surrender, which they refused. The law at the time stated that this refusal then allowed for these people to be killed. Those within the garrison of Drogheda had hoped that neighbouring royalists would come to their aid.

On the evening of the 11th of September, Cromwell ordered heavy fire on the two breaches in the walls. They gained access and won the town. Cromwell had his men set about the business of killing the remaining royalists, for some had managed to flee.

An estimated 3,500 people were killed, many of them civilians. The remainder were taken captive with many of them being sent to Barbados.