One of the greatest discoveries from the Irish Iron Age 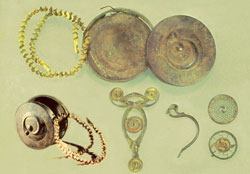 It was discovered in mid 1950s by a local farmer, Mick Hanney. It is one of the greatest discoveries from the Irish Iron Age and was found within the rich landscape of prehistoric monuments in Somerset townland.

One object, a torc, is made from gold and the remainder are of copper alloy. All were made in Ireland during the first century A.D. This collection is now housed in the National Museum.