St. Patrick at Doogary and Kilmore

On his missionary tour through Connaught, St. Patrick entered by crossing the Shannon at Drum-boilan (near Battlebridge, in the parish of Ardcarne) in 434 or 435. 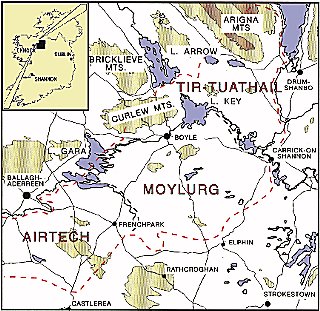 WHEN Patrick crossed the Shannon, he touched the northeastern extremity of the great Roscommon plain of Magh Ai in its widest sense. The royal palace of Cruachán, to which Patrick was, in accordance with his usual practice, making his way, was in the heart of Magh Ai, near Tulsk; and there Mael and Caplait, two brothers, Druids both, dwelt with the daughters of King Laeghaire, of whose education they had charge. The Druids knew Patrick was coming, for they must have heard what had taken place at Magh Slecht, and they were preparing to receive him; so, as soon as he crossed the great river, ‘they brought a thick darkness over the whole of Magh Ai, through the power of the devil, for the space of three days and three nights.’ Then Patrick bent his knees in earnest prayer to God, and blessed the plain, so that it became lightsome once more for all except the two Druids. Whereupon he gave thanks to God, who banished the darkness from Magh Ai.

The spiritual darkness, at least, soon disappeared from that fair and wide-spreading plain. That the Druids might, by the power of the devil, have brought storm and darkness over the plain, can hardly be doubted by those who remember the plagues of Egypt, and believe with St. Paul that the demons are rulers of this air and princes of darkness in high places. But they could not frighten away Patrick, who was strong in faith and the power of the Saving Name of Him who is the true Light of the world.

We are told that when Patrick ordained Ailbe as chief priest at Doogary, he, at the same time, told him of a stone altar in Sliabh Hy n-Ailella under the ground, with four glass chalices at the angles of the altar; “beware,” he added, “of breaking the edges of the excavation.”

This is a strange statement, which has greatly puzzled the Saint’s biographers. How did it come to pass that there was an altar and chalices in this remote and rather wild part of the country. The most probable conjecture is that Patrick passed that way long before when making his escape from Slemish to Killala. Anyone can see that his direct course would lie across the country, by the head of Lough Allen, over this very Sliabh Hy n Ailella, now called the Bralieve Mountain, and thence across the plain of Corann to Ballina. In this way the fugitive Christian youth might have come across some Christian family or hermit amongst the Hy Ailella, and have been entrusted with the secret of this cave, which was, as it were, a catacomb for the scattered Christians of the district.

The statement is certainly confirmed by one fact, which we ourselves observed. In the summer of 1898, accompanied by the Bishop of Elphin, we went to visit the old church of Shancough, or Shancoe, which is situated about a mile to the west of the modern church of Geevagh, but in a far more commanding and picturesque site, that affords a noble prospect of the long, brown range of Sliabh-Ailell mountain. The ancient church was, as usual, built near the rath of the chief, of which some traces still remain. We asked our guide was there a cave near at hand, and soon discovered its existence within twenty yards of the church door. The entrance was partially closed up; but one of the young men present assured us that it extended underground as far as the church. This cave must, in old times, have been very roomy, and was probably connected with the church. There is every ground to believe that this is the identical cave referred to in the Tripartite, and that it was the seat of Christian worship before St. Patrick ever crossed the Shannon. Chalices of glass, or crystal, were certainly used in early times, when it was difficult to procure the precious metals, or even bronze cups, for the Sacred Mysteries.

Of St. Ailbe, the first priest ever ordained west of the Shannon, we know nothing else. His feast day was the 30th January, that of Ailbe of Emly was 12th September. His ‘bed’ and ‘well’ are high up on the mountain’s brow, in full view of his ancient church, but some three miles away, in a wild and lonely spot. It is probable that he retired to live there as a solitary in his old age; and wished to be buried, as he had lived, alone with God, on the bare face of the mountain. The tradition that he was ordained by St. Patrick is still very vivid amongst the people; and they have a great veneration for his ‘bed’ and ‘holy well.’ From his cell on the lone mountain crest, he had full in view the whole parish over which Patrick had placed him. There he prayed for his people in his old age, as, no doubt, he prays for them still in his high place near St. Patrick in heaven.

At Doogary also, or perhaps at Shancough, for the text is vague, Patrick baptised the holy Mane or Maneus, whom Bishop Bron, son of Icne, ordained some years later, and who was placed over the church of Aghanagh on a southern arm of Lough Arrow in this same Tirerrell country. It is a beautiful spot, too, this old church of Aghanagh, standing over the lake shore, looking to the warm south, with fertile fields around, where the monks of old wandered in the sweet repose of their heavenly seclusion. But now, like so many other ancient churches, it is shrineless and roofless, open to the wind and rain, a lonely but a very beautiful home of the dead. The country around, the ancient Tir-Ailell, now Tirerrell, is very picturesque. Its lakes particularly are strikingly beautiful, and all abound in fish. Lough Arrow, Lough Key, Lough Skean, the Keadue Lough, and several smaller sheets of water are all visible from any commanding point on the hills which overlook them, and lend a wonderful charm and variety to a landscape which lacks no element of beauty—neither wood, nor water, nor hill, nor dale, nor rushing river.

The ordination of Ailbe and the baptism of Maneus at Doogary are both interesting facts, and give rise to some enquiries here. ‘Who was this Ailbe?’ There are only two of the name mentioned in our Calendars, Ailbe of Emly, and this Ailbe of Shancoe. The festival of the former is, as we have seen, quite a different day from that of the latter, and this second Ailbe was son of Ronan, of the race of Conal Gulban. Where then did Patrick first meet him? Most probably at Tara, or somewhere in Meath four or five years before, for he was a young prince of the royal family. Finding a suitable youth for the sacred ministry, Patrick at once took him into his own family or retinue, where he received the necessary instruction for the priesthood; and, as the foreign missionaries were now almost exhausted, Patrick ordained this youth for a church which was not far from his own country of Tirconnell, and where he probably had some friends amongst the chieftains of the district.

Mane or Maneus, whom Patrick baptised, was merely a youth of ten or twelve at the time. He was afterwards ordained by Bron, son of Icne, and we know from the Life of St. Finnian of Clonard that he lived to be a very old man at Aghanagh, for St. Finnian met him there probably some seventy years after the events here recorded.

These things took place at Doogary in the modern parish of Ardcarne or Tumna, which got its name from the Woman’s Tomb, that is from St. Edania, who is buried in the old church by the Boyle River, of which she is patron and most likely founder.

From Doogary Patrick went, so far as we can judge, southward across the Boyle River at Cootehall into Maghglass. Moyglass, as it was called in later times, is the green and fertile plain extending along the Shannon’s western shore from Carrick to the bridge of Carnadoe near Rooskey. It is low-lying for the most part, and liable to floods in winter; but then, as now, the green fields of its higher uplands were fertile and densely populated. So Patrick, declining a little eastwards from his straight road to Cruachan of Magh Ai, founded the church of Kilmore Maige Glass, not far from the river’s bank, in a green meadow, which still bears the ancient name. There he founded a church, in which he left two of his household, called Conleng and Ercleng. The names are rather British than Irish; and indeed he could hardly have found time hitherto to train any of the natives, especially of the West, for the service of the Church. In after time Kilmore Maige Glass, or Kilmore na Shinna, as it was called later on, became a famous church, and at the present time gives name to a parish in the diocese of Elphin. The Patrician church has completely disappeared; but a ruin of later date still marks the holy ground, and is surrounded by a densely-populated churchyard, where the rude forefathers of the hamlet sleep.

From A Topographical Dictionary of Ireland, 1837

"An abbey was founded here, according to some, by St. Patrick (and a priory by Con O'Flanigan, in 1232)... There are the remains of an old church near Ballycommen, named Tubber Patrick, where are also the remains of a nunnery. At that place is a fine spring, called by the old people Patrick's Well, whence the place takes its name. At Kilbride are the remains of another old church, with traces of a cemetery, said to have been formerly the parochial burial-place."