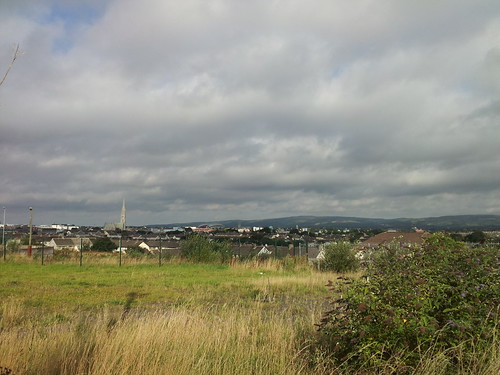 St. Patrick’s Graveyard is situated on the top of St. Patrick’s Road next to St. Bridget’s Roman Catholic Church on the outskirts of the City of Limerick.  St. Bridget’s s graveyard was officially closed in the early 20th century, but has continued to be in used by people who had family plots. The photo is westerly view of Limerick from the graveyard. The spire of St. John’s Cathedral can be seen in the distance. A memorial to Rev John Brahan was erected here.  Rev Brahan was the Parish Priest of Newcastle West and was interred in the Roman Catholic Chapel there in 1861. His mother passed away in 1838 while John was the Parish Priest of Kilmallock. His sister Sarah Brahan died in John’s house in Wilson’s Quay in 1845 while he was the parish priest of St. Mary’s Church.  Rev Brahan married my great-great grandparents, John Seymour and Margaret Anderson, on 20 July 1846 and baptized my great-great uncle, Francis, on 15 July 1847.