The State of the Potato Crop

We have, within the last few days, received accounts, from various quarters, respecting the state of the potato crop; and we are sorry to say, that they are in complete accordance with the worst representations made, since the existence of the disease was discovered. 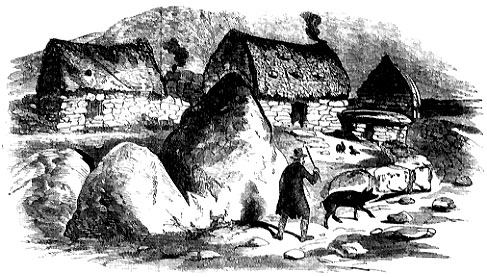 A farmer residing in the neighbourhood of Belfast was asked the other day, whether disease was as extensive as it had been, and his reply was — "No, for it has now but a small quantity to extend upon." He mentioned his own amount of loss and stated, that he had only one-third of the quantity of potatoes, which he usually had at this time of the year. The cases of his neighbours were, he said, similar to his own. A gentleman told us yesterday, that he had put past, carefully, about "one hundred bushels of picked potatoes, which he expected to have for use as the season advanced: they are near all destroyed. From other quarters, the accounts are very gloomy, nnd Bitch R6 to excits the strongest fears for the future. When the disease first broke out, there was, of course, more excitement, and more of public remark; but, whilst familiarity with the calamity has lessened the excitement, the ravage has, nevertheless, steadily advanced. We repeat, that we feel firmly convinced, that the representations formerly made appear to be receiving full and most gloomy verification. It is shocking that, during two or three precious months, when if the ports had been thrown open, a considerable quantity of grain might have been brought in, they have been kept closed. We hope, that, late though it is, one or the first acts of the parliament will he to declare importation of provision to be free.—Northern Whig, Jan. 22.