"A number of young men went into the hollow to the north side of the wall, and an equal number of marriageable young women to the south side of the wall which was so high as to prevent them from seeing the men; one of the women put her hand thro' the hole in the gate and a man took hold of it from the other side, being guided in his choice only by the appearance of the hand. The two were thus joined hands by blind chance were obliged to live together for a year and a day, at the expiration of which time they appeared at the Rath of Telton and if they were not satisfied with each other they obtained a deed of separation and were entitled to go to Laganeeny again to try their good fortune for the ensuing year."

According to O’Donovan, this ceremony was performed at a place close to the Knockauns known as Lag an Aonaich or “Leganeeny” (the Hollow of the Fair). 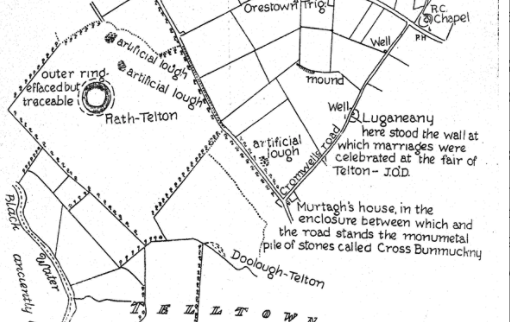 A “Teltown Marriage” is an expression often used in Meath in the present day. In ancient times if a couple who had been married for twelve months disagreed, they returned to Teltown, to the centre of a fort styled Rathdoo, placed themselves back to back, one facing north, the other south, and walked out of the fort a divided couple free to marry again.

The Teltown (Tailtean) custom of divorce for unsuitably assorted couples also obtained in Scotland, England and Wales. In Scotland the espousal was known as “handfasting.” Readers of Scott will remember that in “The Monastery” Julian Avenel explains to Henry Warden his relation to Catherine of Newport:—“When we are handfasted as we term it, we are man and wife for a year and a day; that space gone by, each may choose another mate, or, at their pleasure may call the priest to marry them for life—and this we call handfasting.”  [SOURCE]