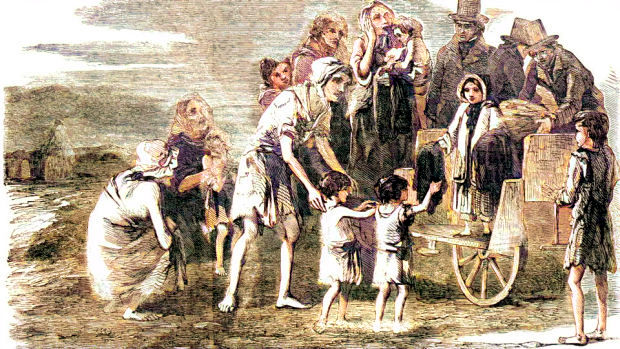 STATE OF THE WEST OF CLARE

The wretched poor of Kilrush are it is to be hoped, gaining friends and defenders amongst members of the legislature, who have visited this union and witnessed their sufferings during the autumn – Thursday last brought another party of these, to see and judge for themselves.

The distinguished philanthropic member for Limerick Mr Monsell MP accompanied by three or other members of the House of Commons, traversed the western portion of the Union accompanied by Captain Kennedy.

I followed in their route the succeeding day and found traces of their sympathy and charity wherever they went. They had visited the wretched district of Moyarta where they saw their fellow-creatures reduced the lowest depth of squalid degradation and suffering—all but naked and sheltered in huts wholly unfit for human habitation.

Thence they proceeded to Doonagh (Doonaha), and Carrigaholt—ruined and demolished cabins dotting their route, like tombstones in the graveyard where many of their former occupants are now lying.

They then proceeded towards the scene of the wholesale clearance Rehey East and West; and saw human beings lingering out their miserable existence, under a few broken rafters and rotten straw, drenched by the nightly rain.

Tullig was the next scene of desolation which they saw, and where a whole village has been erased from the map; the remnant of former inhabitants still lingering about, or within its ruined walls in huts or scalps.

The renowned Moveen with its modern ruins must have edified the tourists en route to Kilkee.

From Kilkee these gentlemen visited Bealaha, Dunmore, Killard, and Doonheg, tracking the exterminator's route as they went. They entered the cabins and visited many a fever-stricken family.

At Doonbeg they examined many cabins where from 20 to 30 of the evicted were crowded and huddled together with hardly a rag to cover them! In one cabin they found fifteen human beings all ages, from infancy to 80 years, lying down in fever or dysentery, or bloated in the last stage of starvation dropsy. The party fearlessly entered and left substantial tokens of their sympathy, which I trust may not end here. Their notice was attracted by two families living under the arch of the bridge, in danger being swept away by every flood, and they were given to understand that the gentleman who exterminated here for a shilling in the pound had applied to the county surveyor to dislodge the two poor families, as they were beyond his own humane jurisdiction. The "rights of property” are exercised here with a vengeance.

They then visited Lough Donnell and Carhuemore, while Captain Kennedy's attention was attracted by an unusually miserable-looking "scalp” in the bog, removed some distance from the road. To this, the party proceeded and in a hole in the bog covered with a few sticks and straw, without a door, window, or chimney, they found a wretched woman and her spectral child lying in fever. The humane visitors, (Lord Adare among the number) each gave her money to relieve her immediate wants, and Captain Kennedy had her removed to Workhouse Fever Hospital. The wretched woman's gratitude was unbounded.

From this, they proceeded through Kilmurry, where they passed close to the scene of the monster eviction which took place the previous day. Sixty-four families numbering about 340 persons were left houseless on the property Minor Casey at Tromore!—Correspondent of the Limerick & Clare Examiner