No research of Irish family history is complete without being able to look at the land location and obtain details about a family’s holding in rural Ireland. Land often played a key social, economic and cultural role for many families living in rural areas. 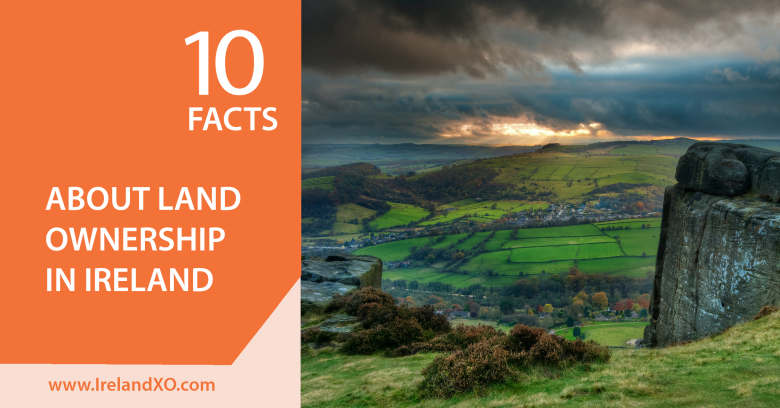 Up to the 1900's the majority of Irish land (97%) was tenanted. The majority of the population pre-famine had little or no access to land ownership. In fact, in the 1780's 5,000 landlord families owned over 95% of all productive land.

Pre-Famine, it was often said that marriages between parties took place between bride and groom who resided within 5 miles of one another.  Often, families married the same families over a period of several generations.  In addition, small communities were created within land holdings whereby individuals played a role within the community—such as the ability to make clothing, repair tools, and build walls.  These communities often had names attached to their fields and their areas which noted their names or some occupation or description attributed to them. See below a list taken from page 65 of Griffith's Valuation for the parish of Errigal, County Derry, and the townland of Coolnasillagh. Note the nicknames in brackets used to differentiate between families.

Traditionally, land was held in a cooperative-style settlement known as a clochan settlement.  This meant that an area of land was occupied by several related families.  They each farmed their own fields and certain fields were held in common with one another.  Due to the penal laws, most Catholic families were unable to own land, but they often were able to create long leases or leases of multiple lives which allowed them to remain on land for several generations.  This did not mean that they had sole rights over the land, as rent was still charged, but with a lease of three lives for example, a specific piece of land could be occupied for many years which gave some security to a family or several families. See below a map of Kilhoyle townland in nearby Kinnaght parish, County Derry which illustrates a clochan settlement, which you will note the strips of land numbered. 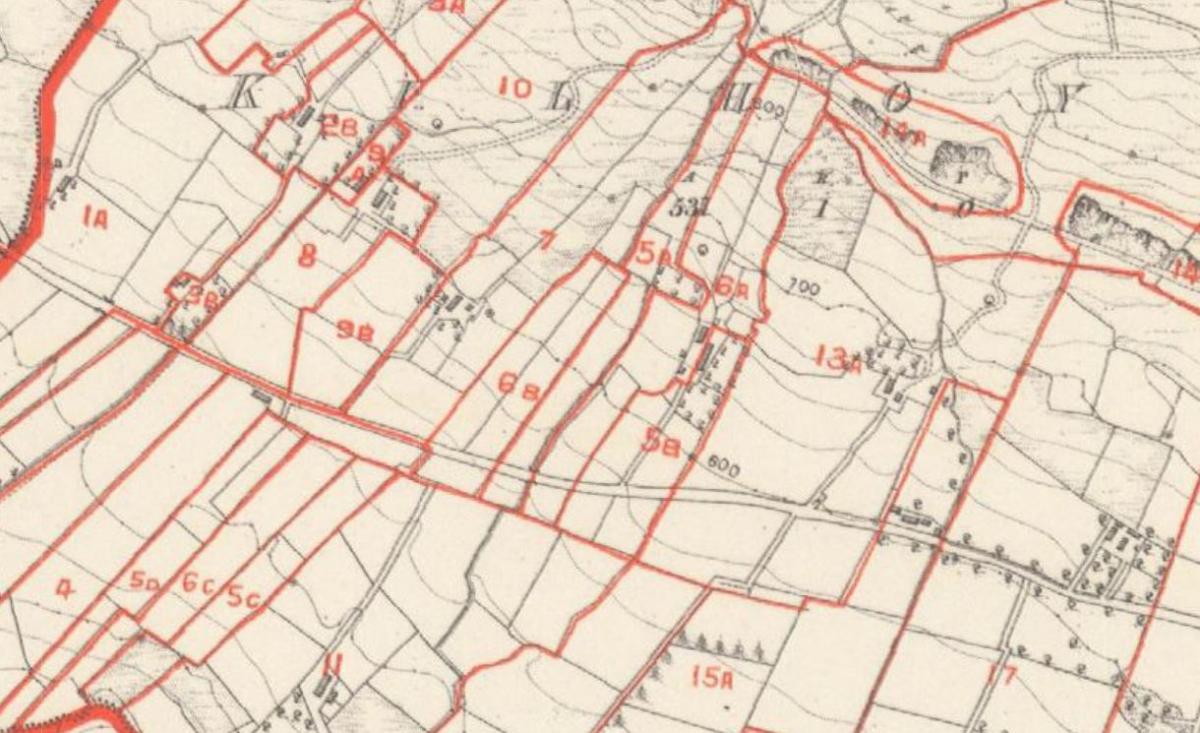 Leases for lives were created by landlords and tenants who often named young children as one of the named lives on the lease.  Doing this allowed a lease to run for a lifetime if the young child lived to an old age.  The added benefit of having several names also assured the lessee that if one named life died, the lease would still be valid.  The lease would be renominated or would end at the end of the last-named life.

For example, looking at the County Clare List of Freeholders 1821 document which is held at the Local Studies Centre in Ennis and has also been transcribed online, it will be noted that many of the properties listed included leases for lives.  (https://www.clarelibrary.ie/eolas/coclare/genealogy/freeholders_1821/list_of_freeholders_1821.htm)

The ability to have a lease for several lives, also allowed a family to share the property with the next generation by virtue of the marriage of the eldest son.  During the early 1800s, land was traditionally transferred to the sons, although not always equally.  The eldest son normally received a larger portion with younger sons receiving smaller equal portions.  This division of the lands became untenable due to the unsustainability of a small holding—particularly after the Great Famine.  Land had become so subdivided that very small holdings of less than 5 acres were no longer sufficient for families to survive.  Many local historians have written about the land situation as well as the increasing population as creating “the perfect storm” for the Famine years.  These issues as well as other issues including high rents, absentee landlords and poor harvests compounded the poverty and distress for many small land occupiers.

For families to sustain themselves and to farm more efficiently, marriages were often arranged on the basis of lands held by the intended bride or groom.  If a tenant did not have any sons, a marriageable daughter often would have a land dowry and the husband would “marry into the place”.  This helped to assure the continued occupation of the land with a family although the name would often die out.  If both bride and groom each  had access to a holding, the union of the two families would assure better economic opportunities with a larger holding.  Families within a small area would often view this addition of lands joining in a marriage as valuable economically for both families.

For situations where a young widow was left with a holding and young children, a marriage was often arranged for her with a local man which would assure that she would not lose her home or livelihood.   In the case of a young widower, a young woman would often marry into the family to assist with the raising of the children as well as working the holding.  This was often seen in rural areas.

The Famine changed many of the land occupancy traditions.  Many families found that their holdings were no longer sustainable and that they either needed to add to them, or to allow their children to emigrate off the land.  Sons and daughters sent overseas were often required to send monies back home in order that land might be leased to add to the holding.  As well as that, many young men left land due to the difficulty with poor harvests, the high rents, and the inability  to purchase.  This would lead to family farm holdings becoming disused and derelict.

The Tenant Right movement which had begun before the Great Famine but had gathered apace during the 1840s and 1850s was the beginning of the push for greater self-determination regarding holdings.  It would ultimately lead to the Land Acts of the 1880s which allowed tenants to request courts to lower rents and the Land Acts of the early 1900s which would lead to the ability for tenants to purchase their lands through Land Annuity Purchases.

Today, researching land holdings in Ireland can lead to many interesting connections between neighboring families as well as communities.  It is often the thread that shows the connections between them, and it can solve the mystery of how  those connections were created.  The use of land records including the Registry of Deeds, the Land Registry and the Valuation Office revision books give greater discovery to how land was initially held and transferred from one generation to another.

Searing online land and property records has never been easier and if you are looking for ancestors before the mid 1800's the records below will be invaluable.

A number of collections are also available offline including

Today, the vast majority of agricultural farms are owned and operated by families and passed from one generation to the next via inheritance. In 2011 just 0.3% of the land was offered for sale on the local market (Irish Farmers Journal, 3 March 2012, Vol 65) If current farmers want to increase their operations, often the only route is to rent land, of which 11-month leases are common,

Jane Halloran Ryan is a professional genealogist who founded Dalassian Origins Family Research and Genealogy Services in County Clare.  She received her M.A. in Local History with Honors from the University of Limerick in 2017.  Her dissertation was entitled "Agrarian Outrages in the Parish of Tulla, County Clare 1852-1894”.  Jane is currently a fourth year PhD researcher at Mary Immaculate College in Limerick. Her thesis focus is on networks between Irish and Irish American communities and their assimilation into Irish American culture in the late 19th century.  She is focusing her thesis on one family from a specific area in County Clare and their migration to Norwalk, CT over several generations.

Jane was recently awarded a grant from the Cushwa Center at University of Notre Dame for her research proposal entitled “Bridging the Emigrant Gap:  The Norwalk Catholic Club 1897-1940”.  Jane has published articles in Slieve Aughty (2014), Reflections from Home and Abroad (2016-2020), The Other Clare (Vols. 42 (2018) & 43 (2019) ), and she has most recently published “Clooney Graveyard”, a survey of the Clooney graveyard in Clooney/Quin parish, County Clare.  Jane has recently contributed articles for the Quin Heritage website about the Singleton family of Quinville and Hazelwood Houses.  Her published articles have included the life of Fr Patrick Sheehy, Tenant Right priest of Tulla Parish; James Molony, Kiltannon Landlord and Entrepreneur; William Mills and Marcus Molony of Kiltannon; Forges in the parish of Tulla, Clare; and the Church of Ireland window from Tulla, County Clare.

IrelandXO Volunteer Mick Baynes connects descendants with their ancestral home in County Mayo. We are always finding ways to "walk" the same roads as our Irish ancestors, and nothing compares to a bit of local knowledge when navigating our beautiful Irish landscape.  (see original query here: https://irelandxo.com/ireland-xo/message-board/foxford-help)