A beginner's guide to Irish surnames

The Macs, the Os and the MacDermottroes. What do you do when a name that should appear on a family history record from Ireland can't be found? You've tried every spelling variation under the Irish sun short of "Rumpelstiltskin". You've even tried dropping or adding an O' and a Mac or Mc and still no luck.

Irish surnames have a way of getting us stuck at crossroads, much like our infamous road signage. And therein lies the clue: bilingualism ... 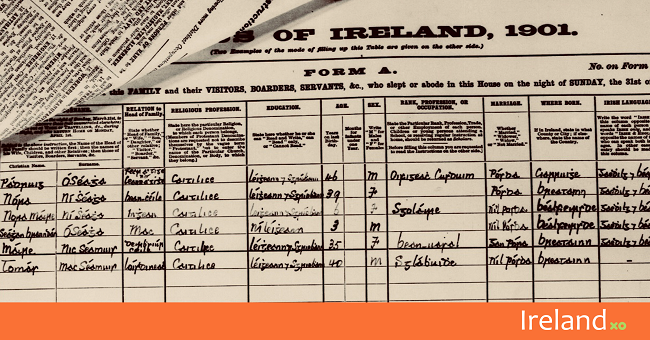 Whether your search for that elusive last name is north, south,  east or west, you may need to get intimate with Irish naming traditions in all their linguistic glory. The above image of a 1901 Census Return from Co. Down illustrates this point: a record search for this "Thomas Jameson" would only have turned up by searching under Tomás Mac Séamais. There are many different origins for Irish patronymic names today but the vast majority can be broken down into three categories: Gaelic, Norman, and English. Irish surnames, originating from all of these groups and more, are well-recognised worldwide as associated with the Emerald Isle. As the prefix Mac or O is the first tell-tale sign that a family name or last name is of Irish origin, let's begin with Gaelic Irish clan names (as they can present the most trouble for researchers).

Mc vs Mac origin, is Mac Scottish or Irish?

Myths abound and none are true, including this one: "Mc represents Irish heritage and Mac is the reserve of the Scots".  In fact, Mac belongs to both. (Did you know that the largest wave of Scots migration to Ulster actually took place in the 1690s, and was fuelled by severe famine conditions in Scotland?) The word Mac in the Gaelic tradition of both Scotland and Ireland means "son of" e.g. Mac Colaim = son of Callum / Colm = McCallum. Some Mac names were Anglicized to recognise this tradition, e.g.  Mac Séamais = the son of Séamas / Shamus/ James = Jameson.  And others lost their Mac altogether due to phonetics e.g. Mac Aodha = son of Hugh = Magee / Mackey and so on. The use of Mc and Mac prefixes was simply down to early inconsistencies in record-keeping.

In Ireland, any given 'Mack' may have been recorded as Mac, Mc, M' and even Mag depending on the transcriber. This scenario was particularly true for 18th-century records, like the Elphin Census of 1749. Search The Flaxgrowers List of 1796 for "McDermott" and you will see no results. However, a partial surname search for "Dermot" will reveal that in 1796 "Mac Diarmata" was recorded under "M'Dermott / M'Dermot" (see also M'Dermottrow for MacDermot Roe). The key takeaway is that Mc and Mac names typically contain a second capital letter (so its always worth searching with and without the prefix).

Irish grammar is tricky, and that's why it can help to explore "Mag" as a grammatical "Mac".  See what happens when you search for Maguire under "Guire" in 1796" here. The key takeaway for the Mag group of "G" names such as Magarry, Magee, Magill, Magowan, Maguire, is to embrace the possibility of a Mac or Mag prefix (see below for our guide to Irish surname spelling alternatives).

In the name of the fada

The Ó prefix (lit. from) is unique to Ireland and quite a few O’ surnames such as O’Brien, O’Sullivan, O’Connor, and O’Neill rank among the Irish top ten.  The original Ó (pron. Oh-fada*) is used when written in Irish and the O' apostrophe can only be applied when written in English. Be careful not to use both!   (Again, see below for a step-by-step guide to Irish surname translation). An interesting database for surname history insights is the Down Survey of Ireland at TCD where you can run a 17th-century landowner search (before and after Cromwell).  This reveals that O’Kelly / Kelly landowners were numerous in 1641, but Murphy (neither O'Murphy nor McMurphy) was not.

*A "fada" in the Irish language (lit. long) is the accent above a vowel that lengthens the sound of that vowel.

When it's a girl! When written in Irish Mac and Ó are for the guys (Mac= son / Ó= grandson).  When addressing the ladies, one must take care to select the correct prefix (which was traditionally dependant on her marital status).

It's Mhic or Uí if they have taken their partner's name through marriage, and Nic or Ní if single or preferring not to change her name; which can often be the case these days.

This is important to bear in mind when exploring Irish Census records. Let's search the Census of Ireland 1901 for surnames beginning with Ó, and you will see it appear in all corners of the island from Cork to Antrim. There are significantly more results for single females under Ní (daughter of). We find nothing at all under Uí (wife of) until 1911 for the simple reason that married women were using the prefix Ua in 1901.

Nowadays all tradition has been thrown to the wind so the genealogy researcher of the future will never know.  Having married Chris O'Dowd, Dawn Porter attached the O' to her maiden name; and she's not alone. A century ago it became fashionable to reattach the O or Mac prefix and some family names adopted the incorrect one. ​Did you know that you are entitled to register your Irish passport using the Irish version of your name, or that you can have both the Irish and English version of your name recorded on it? Should you wish to translate your Irish surname back into Irish, the Irish Name Translator database is a handy spell-checker as well as a surname genealogy resource.

How to Research any Irish Surname

The Irish Name Translator will give you a full appreciation of the diversity Irish surnames, according to "Sloinnte Gaedheal is Gall" (lit. Surnames of Gaels and Foreigners). This database will show you, for example:

“The Mac’s, the O’s, and the McDermottroes - and the rest of ye all are blow-ins.”

There was a time, not so long ago, that a certain Fr. O’Connor would follow “the poor shall inherit the earth” with this reminder that the Gaelic surnames of his poorest parishioners had a higher standing than those of his flock who were proud to be some of “this county’s oldest families”. Albeit pride was a “deadly sin”, the parish priest's assertion that these Old Irish surnames are something to be proud of was not unfounded. The ancient Irish were among the earliest civilisations to value genealogy, and by the 10th century, they were among the first in Europe to adopt hereditary surnames. The first recorded name is Ó Cléirigh (now O’Clery / Clery).

The Normans: "More Irish than the Irish themselves"

So what happens if you type in a surname like Butler, Crawford, or Power into the sloinne.ie? "Does the absence of an O or a Mac identify a blow-in, Father?" Any Walsh, Fitzgerald or Burke in Fr. O'Connor's parish would most certainly have taken exception. What Fr. O’Connor probably didn’t know was that the Mac and O names weren’t in general use in Ireland until the Cambro-Normans arrived in Ireland in the late 1100s. So by the time Cromwell did his worst in the 17th-century, surnames that lacked a Mac or an O had long become “more Irish than the Irish themselves”. Quite a number of surnames carry a "De" prefix when translated into Irish (e.g. Burke > De Búrca) and others may have nothing more than a fada (Pettit > Peitíd) or none at all (Walsh > Breathnach).

On Anglicized spelling of Irish surnames

Irish family names have morphed and evolved a lot since medieval times, and it often comes as a surprise to those new to Irish family history research that, the standardisation of surname spelling did not set-in until the early 20th century. With that in mind, it's good to get intimate with the intricacies of one's Irish surname early on and to “cast the net as wide as possible” with spelling variations. Many databases such as the Tithe Applotment Books allow the use of an asterisk (*) to represent letters of which you are not sure, e.g. M*Gee will bring up McGee, MacGee and Magee. Unfortunately, Sloinne does not. However, a quick check on John Grenham’s Irish Surnames will give you a list of alternative variants you can try.

So while we are on the subject of clan surname insults … “They took the soup” is another old saying in Ireland concerning versions of Irish surnames that have since dropped the traditional O’ or Mac prefix. (For example from “O’Hanlon” to simply “Hanlon”). This derogatory epithet was a suggestion that ancestors had converted to Protestantism during the Great Irish Famine to access the soup kitchens. However, the dropping of the Mac and the O had begun long before the famine. In the 1600s, when English rule intensified, the prefixes O and Mac were widely dropped because it became challenging to find work if you had an Irish sounding name. However, in the 1800s many families began reinstating the O and Mac prefixes. Occasionally, the wrong prefix was adopted, mainly adding an O when the original designation was Mac.

One of the most helpful clues in immigration records and overseas census returns may just be that awkward spelling of an Irish ancestor's surname. There are three distinct dialects of spoken Irish in Ireland and the misspelling of that very surname could hold the key to which dialect your ancestor belonged. For this, it's worth consulting an Irish language specialist.

Casting your net as wide as possible

So what does this mean for your Ireland Reaching Out Ancestor Chronicle or Message Board post? Try adding a list of alternative spellings of your ancestor's surname as a footnote. Simply select each of the alternative spellings from the sloinne.ie list for your chosen surname and drop them in at the tail-end of your message under "ALSO SPELLED..." In that way, those searching for the same individual under an alternative spelling can recognise a connection with your post.

ADD YOUR OWN Ancestor Profile

DISCOVER Surnames in our Ancestor Chronicles

ASK our Message Board

John Grenham’s Irish Surnames is a powerful tool for discovering parishes where two surnames were present.

Irish Times: A dozen Things you may not know about Irish Names

Would you like to know the meanings of the Top 100 Irish Surnames? Check out this list from the people at Ireland Before You Die (which includes famous Irish surname-bearers).