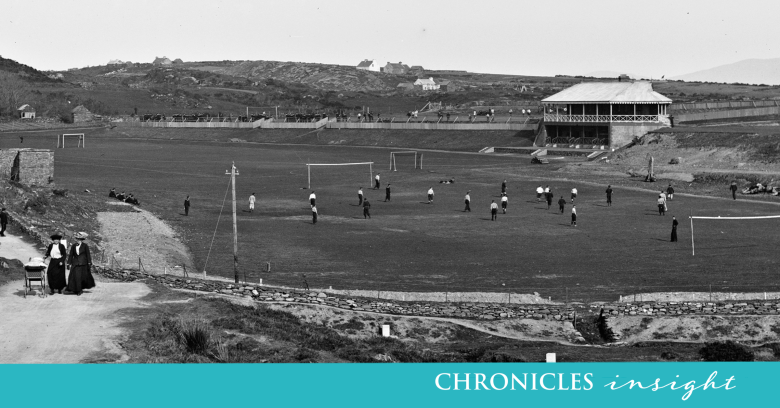 There is a strong tradition of Irish players travelling to Great Britain to have highly successful careers in the world of professional soccer, but this is nothing new. Irish players have been making the journey across the Irish sea to sign with some of the biggest British teams for many years.

So when we cheer for our sporting heroes on the soccer pitch, let’s not forget the early pioneers of this great sport. They played against a backdrop of war and unrest. They followed their passion at a time when a viable career in sport was unthinkable. Let their stories be an inspiration to us all to never give up on a goal, no matter how unlikely it may be.

Here are three Irish men who made names for themselves playing the beautiful game.

William McCrum was born in 1865 in Ballynahone Beg, which is in the civil parish of Lisnadill in County Armagh and is best known as the man who invented the penalty kick!

William studied at Trinity College Dublin, after which he moved to England where he attempted to take up the family business of linen milling. He proved unsuccessful in this venture and was eventually forced to sell the family mill.

William's true passion was football. He played for Milford FC as a goalkeeper and was also a member of the Irish Football Association (IFA). It was in this regard that he is best known. During his time with the IFA, William came up with the idea of introducing penalty kicks as a deterrent to deliberate fouls being performed on players. The motion carried but was not well received, with some going so far as to say that introducing penalties would mean the death of football, which as we all know today, was not the case. The penalty kick rule became the 13th law of the game of football.

William McCrum died in 1932 at the age of 67. The pitch in Armagh where William is said to have invented the penalty kick has been named in his honour as William McCrum Park. It is open to the public.

Billy Gillespie was born in 1891 in Kerrykeel, County Donegal. By the time he was 12 years old, he was already making a name for himself on the soccer pitch and was considered one of the best schoolboy players in County Donegal. This soon translated into a promising career when he started being paid to play football with the Derry Club, Institute FC, in the North-West Junior League at the age of 16.

Billy stayed with Institute for 3 years until the end of the 1909/1910 season, by which time he was known to be one of the best young forwards in Ireland and in May 1910 Billy signed for the English Division Two Club, of Leeds City. His talents were plain to see as he scored 10 goals in his first 24 games. He was then transferred to Sheffield United for a princely sum. There he proved that he was worth every penny when he scored 31 goals in 72 league games in his first few seasons. However, his 1914 season was cut short when he badly broke his leg in a match but thankfully he made a full recovery and he was fit and ready to play by the start of the 1915/16 season.

During World War I, Billy put his soccer career on hold to enlist in the British Army and serve as a gunner, but by 1918 he was back on the pitch again.

In 1923 Billy was appointed Sheffield United’s club captain, and in 1925 he led Sheffield to victory in the FA Cup final. Like many Irish players, Billy also returned home to represent his own country on the international field where he also saw great success.

Billy Gillespie eventually retired to Kent where he died in 1981 at the age of 90.

Tommy Breen was born in Drogheda, County Louth in 1912. He is regarded as one of the finest goalkeepers in the history of soccer. The early stages of Tommy's soccer career were played out in Newry and Belfast where he gained notoriety as a skilled goalkeeper.

In 1936 he made the move to England where he signed with Manchester United, debuting with them in November of that year. Although his time at Old Trafford got off to a rocky start where he conceded two goals in his first match, he soon found his rhythm with his new team. However, his career with Man Utd was put on hold with the outbreak of World War II when the English games were suspended. He temporarily returned to Ireland where he played with Belfast once more.

After the war, Tommy was highly sought after by Manchester once more, however, he had been playing with Linfield in the interim and they were not willing to let him go. He eventually transferred to Dublin where he signed with Shamrock Rovers.

He also had the opportunity to represent his country in both the IFA and the FAI.

Tommy Breen died in 1988, and is remembered as one of the greats in Irish soccer history.

The IrelandXO Chronicles bring to life the heritage of a community by documenting the people, the buildings and the events that existed at any time in the history of the parish. We invite all people of Irish ancestry, both in Ireland and around the world, to bring to life the heritage of every Irish community by recording what they know about our ancestors, the buildings they lived in and the events that shaped their lives.

Find out more and create your own Chronicles