There is a long standing legacy of Irish people taking the boat to Liverpool in search of a better life. Some linguists even posture that the city’s famous scouse accent comes from an amalgamation of English and Gaelic tongues. An estimated 50% of the population of Liverpool can claim some Irish ancestry. Let’s take a look at three Irish Liverpudlians who held various Superintendent roles in the city. 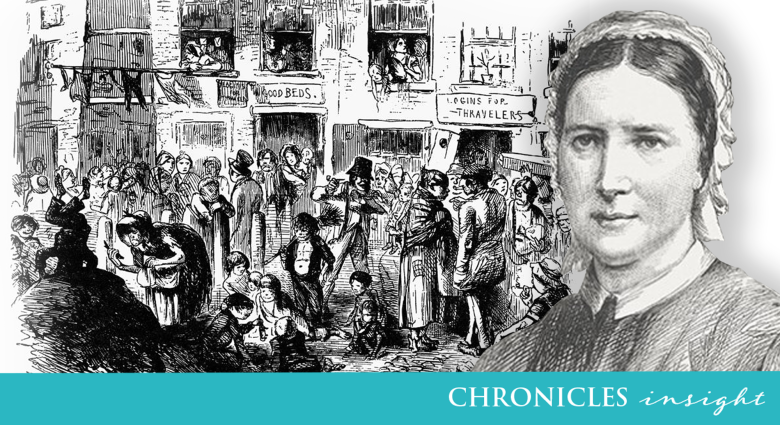 Agnes Jones was born in 1832 in Cambridge to Irish immigrant parents. After spending some of her childhood in India, Agnes and her family moved to their ancestral home of Co. Donegal when she was 11 years old. Though she was sent to England for her education, Agnes returned home to Ireland when her father died in 1850.

In 1853, while touring Europe with her family, Agnes visited the deaconess clinic in Kaiserswerth, Germany where she was impressed with the religious devotion and charitable work of the deaconesses. Upon returning to Ireland, Agnes tried to emulate the deaconesses by tending to the sick and injured of Dublin. In 1860, Agnes was able to keep her promise by returning to Kaiserswerth where she taught and treated wounded children, eventually being appointed Superintendent of the Boys Hospital.

Agnes travelled once more to England, where she commenced her formal nursing training under the tutelage of Florence Nightingale, who personally recommended Agnes for the role of Superintendent of the Liverpool Workhouse Infirmary.

Conditions at the Workhouse were horrific. Disease spread quickly and the mortality rate was high. Agnes worked tirelessly from 5:30am to 11pm, rarely taking a day off. She also gave Bible readings and gave comfort to the dying. The Workhouse Infirmary housed hardened criminals, and the police officers at the time remarked on her ability to soothe and calm even the most dangerous of men.

During a typhus epidemic, Agnes gave up her own bed to one of her staff who was showing signs  of illness, but soon fell victim to the disease herself. Agnes Jones died of typhus fever at the age of 35. Her body was brought home to Fahan, Co. Donegal to be buried, but not before being laid out in the main hall of the Liverpool Workhouse for her patients to pay their respects.

Get started with your research HERE

Browse all our ancestors added to the County Donegal Community HERE

Kitty Wilkinson was born in 1786 in Co. Derry. When she was a child, Kitty’s family travelled to Liverpool, but sadly their boat got into difficulty and both her father and her sister were drowned. Tragedy would follow Kitty into her adult life as her first husband, a sailor named Emanuel Demontee suffered the same fate and when he was lost at sea. Kitty was left widowed with 2 small children to raise, as well as caring for her mother who was now blind and suffering from dementia.

After her mother’s death, Kitty came to Liverpool. She married Tom Wilkinson and made a living by running a small laundry business from her home. Kitty’s caring nature earned her a reputation amongst the people of Liverpool as she often took in motherless children.

From 1832, Liverpool was in the grips of a catastrophic outbreak of cholera. As the only woman in her area to own a water boiler, Kitty allowed her neighbours to bring their infected clothes and linens to her laundry to be disinfected. She was placing herself and her family at a great risk, as the methods of spreading the disease were not fully understood at the time. But Kitty was not deterred. Her basement laundry was completely redesigned as a wash house where people could come to clean themselves and have their linens washed. Such was Kitty’s commitment to hygiene that not one of her staff contracted the terrible disease.

In recognition of the value of Kitty’s work, the country’s first public wash house was opened on Liverpool’s Upper Frederick Street in 1842. Kitty was appointed as Superintendent of the wash house. Her work was even recognised by Queen Victoria who gifted Kitty a silver teapot for her contribution to stalling the cholera epidemic.

Kitty died peacefully at the age of 73. Her diligence in preventing the spread of cholera and her dedication to helping the orphaned children of her neighbourhood earned her the moniker ‘The Saint of the Slums’.

Browse all our ancestors added to the County Derry Community HERE

Michael James Whitty was born in Wexford in 1795. Like many other Irish people, Michael made his way to Liverpool. There he began a career as a journalist, but soon made the switch to the police force.

At the time there were 3 different police forces in Liverpool, the Day Police, the Night Watch, and the Dock Police. Michael rose through the ranks to become the Superintendent of the Night Watch. In this role he was instrumental in quelling the Orange Riots. His commitment to the job was rewarded when he was appointed as the city’s first ever Chief Constable. As Chief, Michael established the city’s first public fire fighting service. Prior to this, the city had a number of different fire brigades who worked for private insurance companies. Michael now commanded a team of over 300 men. Such was his devotion to the safety of the city, that when he retired, the people of Liverpool presented Michael with a cash gift. Michael had served the city of Liverpool as Chief Constable for 11 years.

After retiring from the force, Michael returned to his previous career of journalism. He used his retirement fund to purchase a newspaper, The Liverpool Journal. He lobbied the government to abolish the stamp duty on newspapers, which succeeded after a lengthy campaign. This enabled Michael to publish the UK’s first daily penny newspaper, The Liverpool Daily Post.

Michael died peacefully in 1873 at the age of 78. He is buried in Anfield cemetery

The Irish community in Liverpool has undoubtedly helped to shape the city as it is today. It is important to also remember those hard working individuals that risked their lives to help the people of their adoptive home. So often history recognises the efforts of the rich and powerful, but let us make an effort to remember the ordinary people, just doing what they could to help tend to the sick, keep disease at bay, and keep the peace on the streets.

You can visit Michael’s grave in Anfield, and both Agnes and Kitty are commemorated in Liverpool by statues in St James’ Cemetery and stained glass windows in the Lady Chapel of the Anglican Cathedral.

Browse all our ancestors added to the County Wexford Community HERE

Click on the images below to learn more about the entries that inspired this Chronicles Insight.