The Tithe Applotment Books and Griffith’s Valuation are the two most important land surveys in Ireland for the nineteenth century. The later survey, Griffith’s Valuation is perhaps the most valuable as it is generally more comprehensive. Both are seen as 'Census substitutes' but they do not include as much information as the Census of 1901/1911. Generally their use is in identifying the head of household. 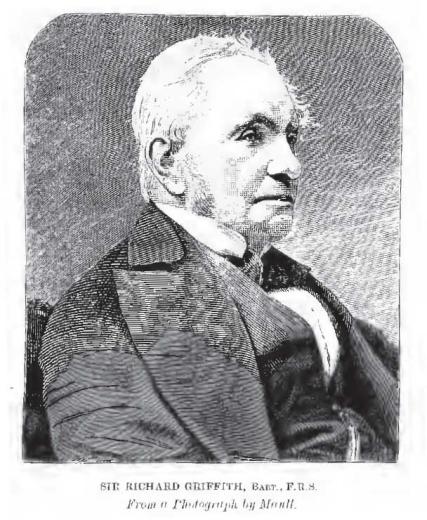 Townland areas often appear to vary from the Tithe Applotment Books to the Griffith’s Valuation – this can generally be explained by the fact that very poor quality land was not taxable and hence not included in the earlier survey.  All lands were included in the Griffith’s Valuation. The Tithe Applotment Books at their best provide the names of all occupiers of land, the name of their landlord, the amount of land farmed by each occupier, including the quality of the land and the amount of Tithes payable.

The Poor Law Commissioners appointed Richard Griffith to carry out a survey and valuation of the whole country.  This was duly done and the results were published between 1848 and 1864, hence the widely differing years in which volumes are available for various parts of the country. Officially known as the Primary Valuation of Tenements, it has come to be known by most researchers as Griffith’s Valuation.  Sometimes the survey was carried out and published by Barony and sometimes by Union. Either way, every civil parish in the area was listed alphabetically and every townland likewise.  Each of the latter was linked to the 6" Ordnance Survey map by the insertion of the relevant OS sheet under the townland name.

For a list of when each County was published, here is the link:

Every townland was divided into a number of ‘Lots’.  For each lot, the survey lists the Townlands and Occupiers, the Immediate Lessors (who were not always the owners), the Description of Tenements, the Area and the Total Rateable Annual Valuation – Land and Buildings at that time.  The reference numbers noted in Column 1 pertain to the valuation maps held in the Land Valuation Office, Irish Life Centre, Abbey Street Lower, Dublin 1.  The Valuation Office also holds the original Valuation Books and the ‘Cancellation Books’, which note the changes in land occupier names up to 1973.

Within the Area category, the land was divided into A. R. and P.  A = Acres, R = Roods and P = Perches; where one acre equals 4 roods and one rood equals 40 perches.

Within the Valuation Column, the money denominations were given as £. s. d., £ = Pounds, s = shillings and d = pence, where one pound equals 20 shillings and one shilling equals 12 pence.

The Griffith's Valuation is also known as Primary Valuation and you can access it as a searchable database on the Public Libraries website:

Further information about the Valuation Books which are available online through the National Archives of Ireland are available here:  http://census.nationalarchives.ie/search/vob/home.jsp

For counties Antrim, Armagh, Down, Fermanagh, Londonderry (Derry) and Tyrone, the Revision books are available through PRONI at this link:  https://apps.proni.gov.uk/Val12B/Search.aspx