Ireland’s historic buildings span more than six millennia.  There is no better way to gain insight in to the everyday lives of our ancestors than by studying the buildings in which they lived – or what remains of them. 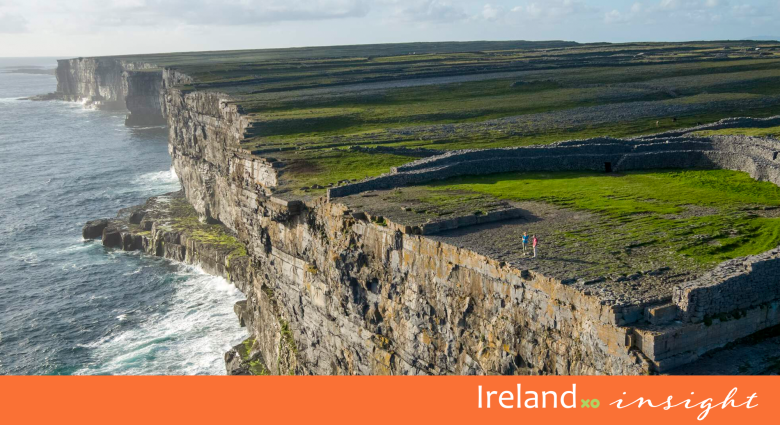 A drive through any county in Ireland will instantly bring you into contact with our Architectural and Built heritage – from stone castles and ancient burial sites to magnificent houses and cathedrals.  Exploring these buildings is an exciting way to discover more about our Island and its varied and turbulent history.

Ring Forts are a dominant feature of the Neolithic period and Ireland has thousands of examples of these - many going completely unnoticed.  These consist of a number of stone or clay walls, usually formed in a series of concentric circles.   The largest and best examples of Ring Forts in Ireland are Staigue Fort in Co Kerry and Dun Aengus on Inis Mór (the largest Aran island off the coast of County Galway).  Dun Aengus was clearly built for defensive purposes and is even equipped with chevaux-de-frise, a number of large projecting stone spikes, set into fissures in the surrounding rock as an added protection against attackers.

There are a vast number of smaller Ring forts, between 30 and 40 thousand of them, scattered throughout every Parish in Ireland.  In some places, it appears that there is one or more in every field!  These were ancient agricultural homesteads, built by a warrior race as a refuge for family and animals , and their building continued through several millennia, virtually unaltered.

Although rather less common than Ring Forts, the remains of early Christian buildings are relatively widespread. Christianity arrived in Ireland towards the middle of the 5th century but it is unlikely that the country was completely converted until a number of monastic settlements were built in the following century.

Monastic settlements were based around a specific saint, who selected a site, gathered a group of followers, and built his church and communal buildings within a ring fort or Cashel. Some saints adopted a more hermit-like approach and built-in remote areas; the centres of bogs, high up a mountain or on islands.  These sites are among the best preserved today, mostly due to their remoteness and lack of access.

There was a greater concentration of monastic settlements along the major trade routes and rivers, such as the flood plain of the River Shannon and its lakes. Clonmacnoise (County Offaly) is perhaps the most important and best known, but other major sites include Inismurray (on an island off the coast of County Sligo), Glendalough (in the remote mountains of County Wicklow), and Skellig Michael, or the Great Skellig, a rocky island, 10 kilometers off the County Kerry coast.

Throughout Ireland, 219 homes, gardens and historic buildings qualify for tax relief in exchange for renovations and maintenance their owners carry out on the properties. The owners are required by the state to make their properties accessible to the public at certain times of the year for a total of 60 or more days per annum. In addition to being open to the public for visits, many of these properties also host events during National Heritage Week.

Click here to download a list of these properties and their opening hours and contact details. It is a good idea to make contact with the owners directly before  to travelling to visit them in to make sure that there has been no change to the visiting hours listed here. order to verify that these exact opening hours may still apply.

The National Inventory of Architectural Heritage (NIAH) is a state initiative under the administration of the Department of Arts, Heritage and the Gaeltacht. Its purpose is to identify, record, and evaluate the post-1700 architectural heritage of Ireland, uniformly and consistently as an aid in the protection and conservation of the built heritage. This website is highly informative, with superb photographic galleries.  It is also a great starting point for identifying places to visit if visiting Ireland

Find about the work of the Irish Heritage Council in conserving and promoting Ireland's heritage.  Learn what heritage events are on near you and how you can participate

The Department of Arts, Heritage and the Gaeltacht

The Department oversees the conservation, preservation, protection and presentation of Ireland's heritage and cultural assets.  It also seeks to promote the Irish language and to support the Gaeltacht.

Find out more about archaeological monuments on your land or in your locality.

The Archaeological Survey of Ireland (ASI)

The Archaeological Survey of Ireland (ASI) is a unit of the National Monuments Service. The ASI was established to compile an inventory of the known archaeological monuments in the State. The information is stored on a database and in a series of paper files that collectively form the ASI Sites and Monuments Record (SMR). The SMR contains details of all monuments and places (sites) where it is believed there is a monument known to the ASI pre-dating AD 1700 and also includes a selection of monuments from the post-AD 1700 period. There are in excess of 150,800 records in the database and over 138,800 of these relate to archaeological monuments.

The Discovery Programme is a public institution set up to pursue advanced research in Irish archaeology. The organization seeks tocommunicate the results of its work to the general public as well as to the academic community.   It also promotes the introduction of new technologies and new techniques into the operation of Irish archaeology more generally.

The Irish Georgian Society is a membership organisation whose purpose is to promote awareness and the protection of Ireland's architectural heritage and decorative arts.  These aims are achieved through the activities of its membership and through its conservation and education programmes.

OSI is Ireland’s National Mapping Agency and has been mapping Ireland in detail since 1824. This  website has information on our wide range of products and services, including an educational section for schools and universities, as well as an updated online shop allowing customers to purchase mapping for both professional and tourist and leisure purposes. There is also a free mapviewer which has modern day mapping, historical mapping from times past and aerial photography.

Do you have information to share about an Irish building?

It may be a rural cottage your ancestors left behind, a grand estate where they lived or worked, or even a courthouse where they were sentenced to transportation abroad. Add a building to our Buildings database and connect with the people living in that place today, as well as those descended from the same place living all over the world.