IrelandXO Insight - What is a townland?

Townlands are the smallest subdivision of a geographical division of land in Ireland. They are of no small importance to the family historian because they can provide a traceable address to the present day, especially for ancestors who lived in rural or less populated areas. 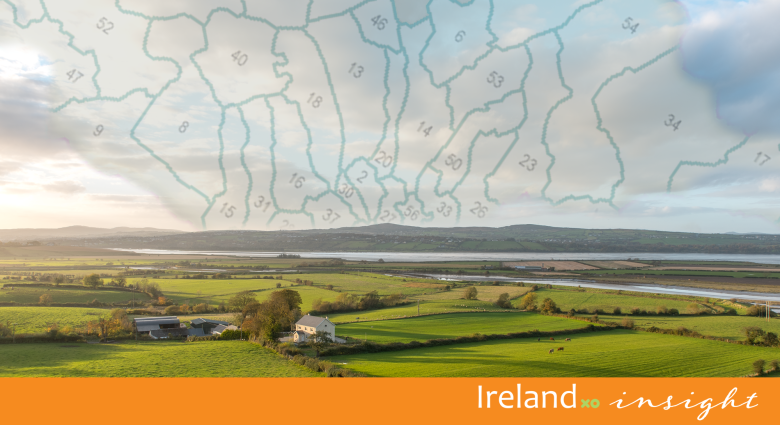 Gaelic in origin, an baile fearainn (baile = home/town fearann= land/territory) aka town-land pre-dates the Norman invasion and is the smallest territorial unit to have survived since medieval times.

Most have retained their Irish Gaelic name which is generally descriptive of a natural feature of the land. Some townlands with unique names can be identified in ancient Irish manuscripts, especially if it was the scene of a famous battle. Canbo (Ceann Bua lit. the hill of triumph) is one such example that locals had presumed to mean "the hill of the cow" until recently. Quite a number reflect the name of a person or family associated with it (e.g. Cloonybrennan from Cluain Uí Bhraonain = O'Brennan's meadow). Other townland names and boundaries come from Norman manors, or from plantation divisions.

The first attempt to map Ireland on a national scale, and to define the Irish townland, began with Cromwell in the 1650s. At the time of the first Ordnance Survey of Ireland, some townlands were recorded as having two names, very often the old Gaelic name and its translation. For example, ‘Ryefield or Runnateggal ’ is a direct translation of the meaning townland’s Gaelic name (Rinn a’ tSeagail = division/ field of the Rye). However, the reality was that townlands were known by many aliases (often listed in Incumbered Estate Court Records). The names "Deerpark" and  "Glebe" occur in many parishes, and represent the landlord's hunting grounds, and land reserved for the vicar.

The boundaries of a townland usually follow natural features such as hills or rivers. It could be subdivided by many walls or none at all and still have contained a small number of farms or a shared rundale system. A townland could be part of a large demesne or grazing ranch, home to one squire or a herd acting on his behalf. Within a townland, every single field has a name, which would have been known locally. If you have information about any minor placename, you are invited to preserve and share it on this exciting new MEITHEAL minor placename database.

The best advice we could give is to set up a record sheet or database for each placename you are researching. Go through the sites listed here, step by step, and record your findings (and the links to them) on your sheet for future reference (as a set of directions to yourself). Once you have identified the civil parish to which a townland belongs (your genealogy signpost) if you are feeling really generous, please share your discoveries in our LOCAL GUIDE here.

For help finding or locating a townland post your query to our Message Board (be sure to link it to the county) where our local volunteers can help point you in the right direction.

Once you have confirmed the townland spelling and civil parish you can delve deeper to uncover who lived there in the past.

We recommend you BOOKMARK this page for future reference and SHARE it with your friends (in case you lose it).