Access to records, archives and heritage information have dramatically increased in recent years with many state bodies digitising documents and images, promoting their awareness, and sharing them online with the public. Here's our top selection of the best genealogical sources and repositories when carrying out your Irish family history research. 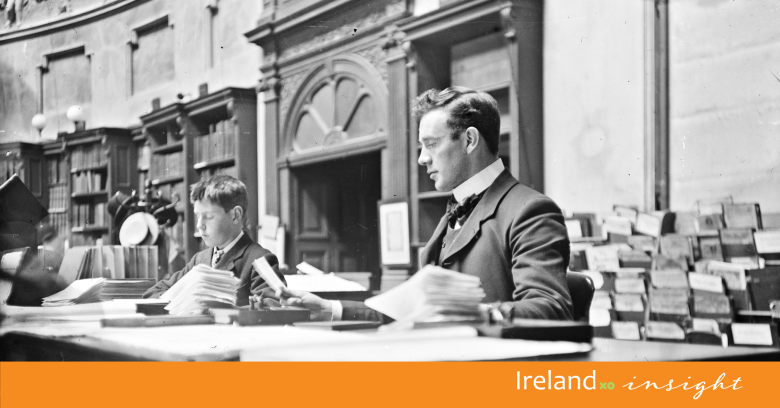 Access to records, archives and heritage information has dramatically increased in recent years with many state bodies digitising documents and images, promoting their awareness, and sharing them online with the public.

Here's our top selection of the best genealogical sources and repositories when carrying out your Irish family history research. Click here to download a handy pdf to keep on your desktop!

For the period before 1864, church records provide the only record of most baptisms, marriages and burials in Ireland.   Microfilms of parochial registers are available at the National Library of Ireland for most Roman Catholic parishes for the years up to 1880, and in some cases up to 1900.  The original parochial records (baptisms, marriages and burials) remain with the relevant Roman Catholic parishes. Online access to these microfilmed registers are now available to view online for free at the NLI Registers website. Click here to visit website

The General Register Office is the central civil repository for records relating to births, stillbirths, adoptions, marriages, civil partnerships and deaths in Ireland. In 2016, free online access to these records has been made available to public through the Irish Genealogy website. Click here to visit the website

On this micro site of the National Archives, you can access the Census Records for 1901 and 1911, Census survivals for 1821-51, Census Search forms for 1841-51, the Tithe Applotment Books from 1823 to 1837, the Soldiers’ Wills from 1914 to 1917, and the Calendars of Wills and Administrations from 1858 to 1922.  All of these records are free to access, through searchable databases and linked images of relevant pages. Click here to visit the website

The Irish Land Registry is one of the most advanced land registers in Europe. The Registry is fully computerised and all registered land parcels are digitised. Registration is conclusive evidence of title to property. Click here to visit the website

The Valuation Office has a manuscript archive containing rateable valuation information of all property in the Irish state from mid 1850s until the early 1990s. This archive is recognised as a census substitute for the period from the 1850s to 1901 (the earliest complete census record for Ireland).The archive may be used to trace the occupiers of a particular property over a period of years.  Click here to visit the website

The Police Museum holds microfilm copies of the Royal Irish Constabulary service records 1822-1922, the originals of which are held at the Public Record Office at Kew in London. Click here to visit the website

The Military Archives has been the official place of deposit for records of the Defence Forces, the Department of Defence and the Army Pensions Board since 1990.  They have are continually increasing the amount of records accessible online and currently have more than 2 million images on their website. Click here to visit the website

PRONI holds millions of documents that relate chiefly, but not exclusively, to Northern Ireland.  They date largely from c.1600 to the present day (with a few dating back as far as the early 13th century).  Public Record Office of Northern Ireland

10. National Archives of the United Kingdom

The National Archives of the United Kingdom is home to millions of historical documents, which were created and collected by UK central government departments and major courts of law. Many of the most popular records are available online. Over 5% of the collection is now available online and this figure keeps growing. National Archives of the United Kingdom

Libraries NI has an extensive range of resources that are of benefit to historians, researchers, genealogists, students and those who have an interest in cultural and community life, past or present. You can get advice in any public library in Northern Ireland, with the main heritage collections located in 9 specific libraries.  Public Libraries of Northern Ireland

The GRO has records of every birth, marriage and death registered in England and Wales, starting from July 1837. General Register Office UK

The majority of Scottish birth, death and marriage records are held in the custody of the Registrar General for Scotland at New Register House in Edinburgh. On this website you will find separate guides to each of the registers. National Records of Scotland

A blog-based website giving free expert advice on your Irish Family History research and keeping you up to date with all the latest developments and new releases in Irish genealogy.

Launched in 2011, this subscription-based site is specialised in Irish ancestry.  It is the first company in the world to publish the Landed Estates Court records and the Irish Prison Registers online. Many collections can be viewed for free.

Find out about Irish surnames, place-names, parishes and much more on this dedicated Irish genealogy site

You can search, retrieve and view Ireland's past exactly as it was originally published. With many of Ireland's leading national, regional and out of print titles, this website is a wonderful resource for novice historians and academic institutes.  The archive range from the 1700's to the present and give a unique perspective on national and international events through the Irish news press.

Index to civil registers and parish records for a number of counties.

The society also provides resources related to child migrants to Canada (Home Children) originating from the U.K. and Ireland.

This has spent the last fifty years working to encourage, bring together and assist those interested in the pursuit of family history, and to preserve the Ontario genealogical heritage.

From October 1831 through October 1921, the Boston Pilot newspaper printed a "Missing Friends" column with advertisements from people looking for "lost" friends and relatives who had emigrated from Ireland to the United States. This extraordinary collection of 40,743 records is available here as a searchable online database, which contains a text record for each ad that appeared in the Pilot.http://infowanted.bc.edu/

More than 22 million passengers and members of ships' crews entered the United States through Ellis Island and the Port of New York between 1892 and 1924. Information about each person was written down in ships' passenger lists, known as "manifests." You can search these millions of records for information on individual Ellis Island passengers.

Irish American Heritage Centre - Chicago   was founded in 1985 - with the intent to celebrate Irish, Celtic, and Irish-American cultural traditions

The American Ireland Fund  is part of a charitable organization raising money for worthy causes in Ireland.

Ancient Order of Hibernians   is the oldest and largest Irish Catholic organization in the United States.

Coalition of Irish Immigration Centers in the USA

The Irish in Argentina  The Immigration Museum in Buenos Aires run by the Department of the Interior has individual cards with the names of Irish immigrants stored in their archive.

Do you know of an International Organisation that can be useful in researching your Irish family history?  We are currently compiliing a new list of International resources and would love to hear your suggestions. Email us.