Was the Irish Linen industry powered by your ancestor? If the house had a spinning wheel in it, read on!

The Irish Linen Board's Flax Growers List of 1796 is one of the few 18th-century resources that can help trace an Irish ancestor back a generation ... 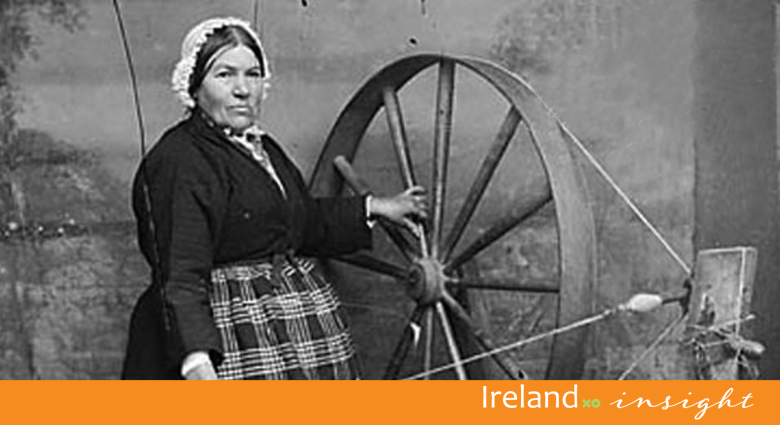 Picture: A Linen Bleach Green in County Down circa 1890

The History of Irish Linen Fabric

Irish Linen is renowned the world over for its superior craftsmanship and quality of the material.  Irish Damask linen, developed in the 18th century, graced the tables of stately homes and royal palaces all around the world and is still produced in Ireland today. The linen industry has been a large-scale provider of trade and employment at a local level in Ireland for centuries.

Linen is made from the flax plant which had been cultivated in Ireland since ancient times. Two-thousand-year-old evidence of flax curing has been found in Irish bogs and early Irish Brehon Laws dictated that every farmer had to learn and practice the cultivation of flax. In Tudor times, such was the abundance of linen productions that a law had to be passed to ban retting in rivers – to protect the fish!

In Ireland, retting (the process of releasing the fibres by controlled rotting of the plant) was traditionally done in ponds, rivers, or retting dams.

In the 18th and 19th centuries, flax was one of Ireland's chief crops. Although linen production accounted for almost half of Ireland's exports, it was very much a cottage industry dominated by the spinning wheel and hand-loom.  Spinning and weaving mainly took place on small farms and in villages and was an occupation suited to the female members of a family with the menfolk only getting involved with the weaving during the quieter farming months. The fortunes of many were caught up in spinning, from the merchants and factory investors down to the small cottages where women worked the loom.

However, as people were more interested in spinning and weaving than cultivation the Board of Trustees of the Linen and Hempen Manufactures of Ireland (1711-1823) came up with a plan to encourage more flax-growing ...

In 1796, the Board of Trustees of the Linen and Hempen Manufactures of Ireland (1711-1823) wanted to encourage more farmers to grow flax and hemp seed to meet demand. Spinning wheels, reels or looms, were awarded in proportion to the acreage sown. As a result of this incentive, many landowners and small farmers allocated part of their land to flax and hemp crops. County inspectors were appointed to receive claims from the growers and county lists were published as official documents of the Board.

A quarter-acre of flax equalled one spinning wheel and those who grew over five acres or more received a loom, reels or List to the value of fifty shillings.

The Spinning Wheel Survey or the Flax Growers List provides the names of almost 60,000 flax growers across Ireland* who were incentivised to grow the crop by the Irish Linen Board. The northern counties of Tyrone and Donegal had the largest number of spinning wheels awarded. Ulster had 64.6% of the wheels, the remaining were distributed throughout Ireland. The online version of The Flax Growers List is FREE to search HERE. The only known surviving copy of the records is held at the Linen Hall Library of Belfast.

*No records exist for Dublin and Wexford. Either they received no wheels or, the records have been lost.

The Fáilte Romhat Flaxgrower's Database can be searched either BY COUNTY or BY SURNAME. The results include the civil parish of residence (but not the townland address). This early source can provide much-needed information about the progenitor of an ancestor, especially given the scarcity of parish records in the 18th century. While not comprehensive in detail it can provide some information about the existence of a family name in a given parish at that time, especially where the passing on of a grandfather's given name is suspected. It is also worth checking out the surrounding parishes for signs of a family stronghold which may have spread into a neighbouring parish by the early 19th century.

For example, glance at Co. Leitrim can reveal the parishes where the Beirne or Bohan surnames were well-represented.

ADD a Flax Grower to your PARISH database

Small cottage industries thrived until large factory-type production began in the 1830s and 1840s (when necessary machinery such as water-powered scutching, washing and beetling mills had been introduced).  Quite a number of counties had a mill or factory in every town – vital structures in Irish society for that time. Industrialised linen production occupied men, women and children who worked to steep, scutch, spin, weave and bleach. Evidence of those working in the linen industry can be explored in the Census of Ireland 1911 where, for example, 456 people were recorded as Flax Scutchers that year.

Keep an eye out for mention of a bleach-green in your local parish in Samuel Lewis' or Griffith's Valuation records. This is a field where the linen fabric was laid out for bleaching in the sun with the help of lime. Your farming ancestor may have benefited from this industry by way a lime-kiln on his land (which may also appear on a map).

As well as recording very direct and useful information about a potential ancestor, (name and civil parish for example), databases like this provide a way to learn more about the wider social and economic times. At the turn of the 19th century, for example, the town of Loughrea, Co. Galway was well known for its linen industry. By 1821 a new Church of Ireland building was provided for a growing congregation, brought to the town through the garrison stationed there but also as part of the thriving linen works. The town also had its own Linen Hall.

It is thought that many Protestants were lured to Loughrea by enterprising landlords working in the linen industry who believed that Protestant workers, particularly Protestants from Ulster were more industrious than their Roman Catholic counterparts (see John Cronin, ‘An Overview of the Linen Industry in Loughrea in the Eighteenth and Early Nineteenth Centuries' for more on this). Along with linen grew the merchant trades and so we have the development of the town around this business.  There is no one from Loughrea listed on the Flax Growers database, pointing perhaps to the fact that the town received its flax from outside rather than growing any itself. This is evidenced by the fact that neighbouring parishes in east Galway are represented, likely sourcing the flax that provided the linen product.

ADD your own Irish Linen Ancestor

With automation and technology replacing much of the original handcraft, fewer people are now employed in the trade. However, the Irish Linen brand has kept its niche in the luxury market, and its tradition of high quality and superior yarn are still central to this precious Irish article in industrial textiles. Irish linen is still woven today, in the same traditional areas, by descendants of the same families who have passed on their skills for generations.  Irish companies such as Thomas Ferguson's Irish Linen and Ulster Weavers still ship beautiful Irish linen products worldwide today.

ADD your own Irish Linen Ancestor

LEARN MORE  how to locate a CIVIL PARISH

ADD a Flax Grower to your PARISH database