With the loss of Ireland's early census records, we have come to rely heavily on church records as 19th-century census substitutes. However, gaps and omissions can often frustrate our efforts. Understanding the precise pattern of Irish naming traditions allows us to make some educated guesses ... which can be extremely helpful in piecing together that jig-saw puzzle of an Irish family.

But how reliable are these naming conventions?  And how do we unravel that web of identically-named grandsons all living in the same parish? 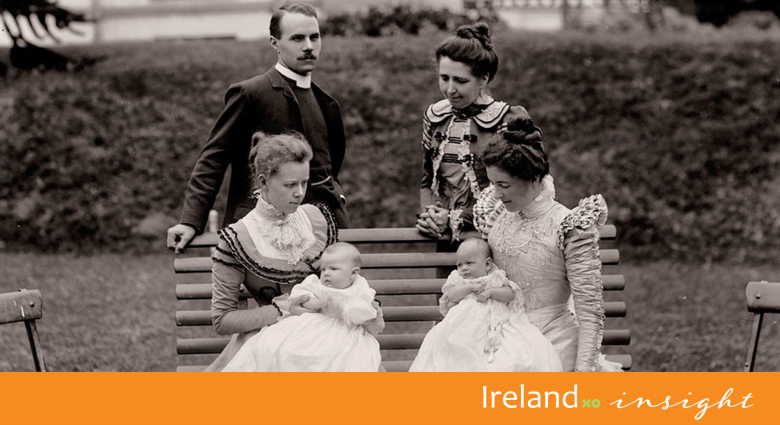 This handy insight will show you how to work out Irish family patterns (a) in the early 1800s and (b) after the Great Famine when these traditions changed drastically.  Remember, you can always post a query on this subject to our IrelandXO Message Board anytime you need guidance. To join up and get started, click HERE.

For about two centuries (from the late 1700s through to the early to mid-1900s) the Irish favoured a precise convention for naming their children that can suggest what names to look for in a previous generation. All that's needed is for one sibling in a family to have used this pattern with accuracy (even if one's own direct ancestor deviated a little).

1st son named after the paternal grandfather (his father's father);

2nd son after the maternal grandfather (his mother's father);

3rd son after his father;

4th son after his eldest paternal uncle (his father's eldest brother) and so on in that order.

​NOTE: this wasn’t always followed as closely as it was for boys

1st daughter named after the maternal grandmother (her mother's mother);

2nd daughter after the paternal grandmother (her father's mother);

3rd daughter after her mother;

4th daughter after her mother's eldest sister; and so on in that order.

When remarried:  the name of the deceased first wife was often given to the first-born daughter of the new wife.

Reliability and Exceptions to the Naming Patterns

The problem with relying too heavily on naming patterns (apart from the fact that not all families adhered to this naming custom) is that the pattern can be upset when:

The poorer the class, the more likely the above naming convention was followed to the letter. Wealthier families may have deviated for a number of reasons such as:

Middle names, as we understand them today were not common among the poor in 19th-century Ireland.   In the Old Gaelic tradition, a child was identified by patronymic (the father's first name) rather than surname/family name.

For example, the middle name of "Tom Sheánín Mac Donnacha" is not a baptismal second-name but rather, a local identifier i.e. "Tom son of Johnny McDonough".

This tradition, in day-to-day conversation, is still alive and well in the west of Ireland. Unfortunately, it was not carried through to official or church records. So what did the officials do when the sub-division of land led to multiple occupants of one townland sharing the name of a grandfather? Griffith's Valuation is one official record to sometimes make use of the patronymic (i.e. the father's name was noted in brackets) - a massive clue!

e.g. “John Kelly (Mike)” and “John Kelly (Pat)” residing in the same townland should be explored as likely first cousins.

Surnames used as a middle name were the reserve of the gentry in Ireland.  Protestant and Catholic cess-payers used middle names as a vehicle for the preservation of a mother’s maiden name when it held some prestige or inheritance.

The double-barrelled surname was usually adopted as a condition of marriage/inheritance, to keep the name alive when there was no male heir.

In mid-19th century America, the custom of even poor Irish immigrants honouring family members through a child’s middle name increased dramatically. When little or no paper trail exists, first and middle names are also very useful hints for tracking down lineages. By the turn of the 20th century, the "old family name" that continues to pass down through multiple generations should be explored as the first name of a much-revered mother/ father of the emigrating ancestor. Reverse-genealogists will find this extremely helpful when searching for extended family State-side.

The repetitive use of a given name for two or more siblings is a major clue as to (a) potential grandparent names and (b) the estimated year of death of the previous child who had that name. The repetition of a baptism name, tells us that the parents very much wanted to keep this name alive within the family. Infant mortality was high in the 19th-century but in most cases, there is nothing recorded about infant deaths in Ireland until compulsory GRO began in 1864. (Also, a better understanding of infection and antisepsis in the latter half of the century, helped reduce infection rates in childbirth).

In gap-filled baptism records (where no repetition of a given name is apparent) the frequency of infant deaths can also be spotted by the re-invitation of a godparent to sponsor later baptism(s). Not only does this indicate that a previous godchild has died young, but it is also a tell-tale sign that the godparent was a close neighbour. In the case of poorer families, the sponsor likely to have resided in the same or adjacent townland, and may not appear on any land records. For the tax or cess-payer, the sponsor is likely to appear on land records in the same or adjacent parish. When a sponsor with an unusual surname is repeatedly invited to godparent by the same couple, this signals that this individual was a close in-law (i.e. married to a sibling of the child's mother or father).

LEARN MORE: What is a "parish"?

During the Counter-Reformation, the Catholic Church implemented strict reforms regarding unbaptized infants. From the early 17th century in Ireland, the burial of unbaptized babies in consecrated Roman Catholic graveyards was prohibited.  According to Catholic Doctrine, the unbaptised would spend an eternity in 'Limbo' (halfway between heaven and hell). With infant mortality so high, Catholics rushed to have their babies baptised within 3 days of birth, to avoid having to bury their beloved child in an unmarked grave on 'unconsecrated ground' (along with the mentally disabled, suicides, beggars, executed criminals, and other prohibited burials).  Thus ancient burial sites, known as cillín (killeen) were used as burial grounds for the unbaptised. Regional variations may refer to such cill (kill or kyle) burial grounds as cealltrach (caldragh), ceallúrach (calluragh) or lisín (lisheen). A characteristic of many cilliní burials was the placement of white quartz pebbles along with other stone pebbles on the child's grave. This practice continued in Ireland until the Second Vatican Council in the 1960s (followed by much parental campaigning to have these grounds consecrated).

From 1 January 1864, by law, all parents were obligated to register the births and deaths of their children, to include infants who died before baptism could take place.

With little else to go on pre-1864, church records can be a godsend. But how can we possibly figure out if this naming pattern was adhered to if the marriage began before records existed, or when a parish register had gaps and omissions? Whatever the way the records turn up, there are some traditional practices (based on anecdotal evidence) that can inform how you proceed, depending on the period of research:

Before the Great Irish Famine

After the Great Irish Famine

Early Christian teachings on the sacrament of baptism (by which to cleanse ancestral original sin) continued to be shared by both Catholic and Protestant traditions in Ireland. For this reason, baptism records in Ireland are a highly-valuable genealogical resource for everyone.

Some Catholic priests recorded the first names of all parties in Latin. As many traditional Gaelic given names didn't have an official Latin or "Christian" equivalent, each priest had his own creative way of addressing that challenge.

Another point worth noting is that the child's mother and female sponsors were always recorded under their maiden name (regardless of marital status). Sometimes the priest, in confusion, transposed the first name or surname on a record, so keep an open mind if one record in your list appears odd. Curiously, fewer errors were made with male names in records.

Catholic priests often recorded the "stipend" paid to the priest in the righthand column of the baptism registers. Pre-famine records indicate that

In both traditions, a sponsor or godparent was supposed to exert a supporting influence on the child especially in regards to their faith. In real practice, the pattern of godparent selection depended on wealth and proximity.  In the case of the Cess-paying gentry, a relative or prestigious family friend would fit the bill. In the Protestant tradition, there should be 2 sponsors for any baptism (save for adults) but sometimes you see just one. In the Catholic tradition, the absence of a second sponsor usually indicates an anomaly (e.g. a single mother giving birth in secret in another parish).

The poorer class of Catholics (rarely named on land records, but living in a townland in some sort of extended-family rundale system) followed a specific godparent convention to the letter:

"Wetting the baby's head" in Ireland does not mean the act of baptism itself, but rather the celebratory drinks that would follow the ceremony!

To unlock your family tree and break down brick walls in your genealogy research, follow that unexpected sponsor's surname in the baptism records:

SEARCH for an ancestor on our database

ASK a question on our Message Board

BOOKMARK this insight for future reference.

To SHARE this unique guide, just click on the icons on the green side-bar to the left.