An Irish Wake for the Living: American Wake

As anyone who has experienced the emigration of a family member or close friend will know, there is a painful poignancy to the last goodbye before departure. On the one hand you are excited and happy for your loved one to be striking out on a fresh path; on the other you feel the acute loss of a relationship that will dramatically change, no matter the promises of regular contact by Facebook or Zoom and visits home courtesy of relatively cheap air-travel.  For our Irish ancestors however, the emotions were all the more extreme. 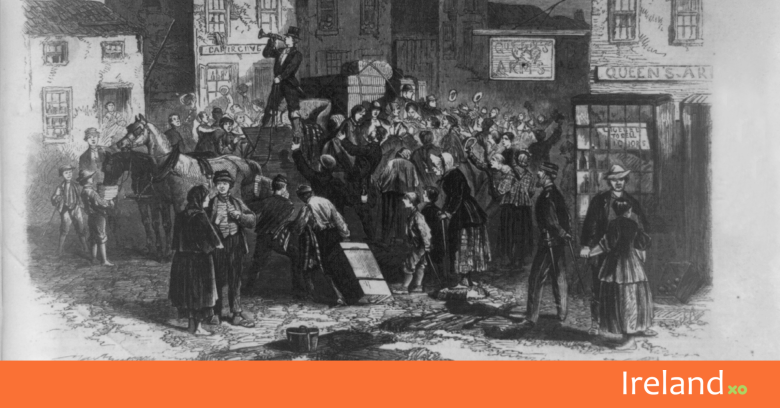 Emigration held out the promise of a more prosperous and fulfilling life than Ireland could offer but it came with the almost certain reality that the emigrant would never again see his or her parents, siblings, friends or homeland. For both the dearly departing and those left behind, leaving was as final a parting as death.

A ritual unique to Ireland evolved to mark the departure. It was known by many names in different areas of the island – a convoy, in Ulster; a farewell supper, in Munster; the Spraoi (spree), in some Midlands counties; and the Drinking Bottle, in Donegal – but most commonly, in deference to the destination of the majority of emigrants,  it came to be called The American Wake.

When this 'living wake' ritual started is uncertain but historians suggest it was performed by at least some departing Presbyterians by the last quarter of the 18th century and was widespread among emigrating Roman Catholics in the early decades of the 19th century. Despite its early practice among Presbyterians, the origins of the parting wake are thought to lie in old Gaelic social customs in which the very notion of emigration went against the tradition of extended family and clan relationships.

The American Wake was held on the night before departure. Preparations began in the week before. While the women spent days cleaning the party venue – nearly always the emigrant family's home – and baking and cooking, the men concentrated on gathering firewood and, if religiously tolerated, organising supplies of whiskey or poteen, porter or stout. The emigrant-to-be (often referred to as 'the Yankee' by this stage) visited friends, extended family and local clergy to say their personal farewells and to receive advice, lucky charms to guard against drowning, and other precious gifts and tokens to remind them of home and their loved ones.

A not-so-subtle feature of this process was the infliction of guilt and duty on the emigrant, the former for bringing such pain and loss to their family and community and the latter to ensure the emigrant would feel honour-bound in their new life to send financial support to their parents and siblings. 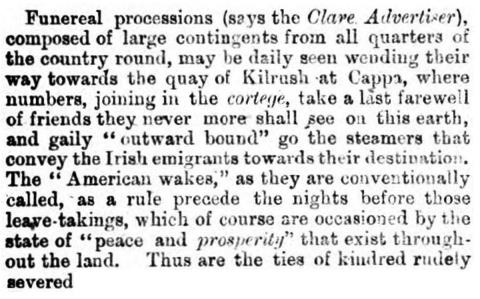 Image above:  A cutting published in the Dublin Weekly Nation, 22 May 1875.

The night of the party itself could be quite a harrowing affair, with displays of uncontrollable grief and communal sorrow interspersed with the enjoyment of food, drink and music, and, in later years, singing and dancing. Ballads were usually of the more sentimental type telling of exile, lost love and mourning; there were many to choose from in the folklore tradition, and plenty more were written in the 19th century, often by a new generation of Irish-Americans, to relate the mixed emotions and loneliness of the emigrant experience.

In most of these ballads, the emotions of guilt, grief and loss are blamed on outside forces, often unnamed but usually quite clearly pointing a finger at the British for failing to deliver prosperity, opportunity and religious freedom to Ireland. The Emigrant's Farewell to Donegal (1846) is an example:

It was not enough to support us all

Which banishes me from my native land

To old Ireland I bid farewell.

My hardships here I can't endure

Since here no longer I can stay

I take my lot and leave this spot

And try the Land of Liberty.'

In many ways the American Wake was not dissimilar to the traditional Wake held after a death except that, instead of accompanying the dearly departed to the churchyard, friends and relatives would accompany the emigrant in the early morning on the first stage of their journey to the quayside. This might have been to the crossroads on the edge of the village or, as Ireland's public transport system developed, to the nearest town's market square to await the arrival of the jaunting car (from 1815), or to the train station (from the 1840s). Close family and friends would then say their final farewells. 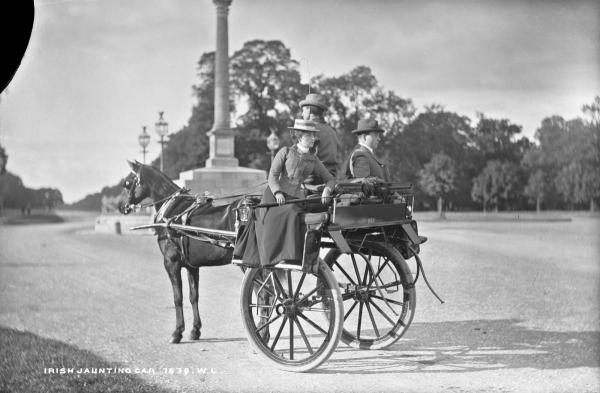 During the Famine (1846-1851), The American Wake was toned down, if held at all, but the ritual continued into the early 20th century in most of Roman Catholic Ireland and was most prevalent  along the Atlantic seaboard and the hinterland of Ulster. However, some of its traditional elements were beginning to be lost, as emigration increasingly became the norm of Irish family experience, as the journeys across the Atlantic or to Australia became safer and quicker, and as more emigrants found the means to return to Ireland for important family events and holidays.

Claire Santry runs the Irish-Genealogy-Toolkit.com website and IrishGenealogyNews.com blog. She is also the author of the book The Family Tree Irish Genealogy Guide: How to Trace your Ancestors in Ireland.

Tell us about your ancestor! Share their story with their Irish place of origin and those descended from the same place.