Got a lot of background information on an ancestor, but struggling to find them on vital records searches? Know exactly where an individual lived and died in Ireland, yet no death or census record can be found?  Could it possibly be of that Irish first name of theirs?

Before we get into nicknames or spelling variations, understanding how 19th-century record-keepers improvised with Gaelic Irish given names is a must. Here, we take a look in-depth at the most common traditional Old-Irish boys names, their perplexing translations and pronunciation, and how to track their many aliases in Church and Civil Records.

For help and guidance in getting around this particular challenge, and in making sense of the records you find, the easiest way, of course, is to post a query to our Message Board on IrelandXO.com.  If you haven't signed up already, your free membership awaits you HERE. 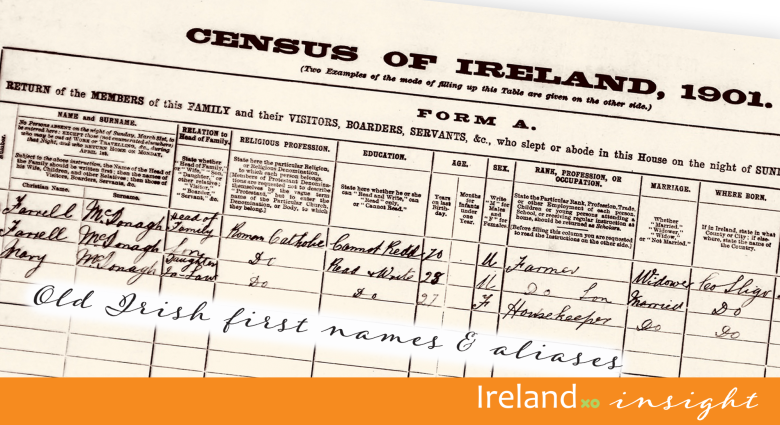 Cé leis thú? Who do you belong to?

Despite claims to the contrary, there's no doubt that 19th-century Ireland was still very much a Gaelic-speaking kingdom, especially in the parts of Ireland from where the highest proportion of our ancestors emigrated. While our native language suffered unquestionable devastation by the Great Famine, the number of households where Irish was the day-to-day language was still significant in 1865. Our ancient naming traditions were still alive and in use but disguised by the evolution of aliases and nicknames.

In the oral tradition, people were known locally by the given name of a parent and grandparent, (e.g. Máirín Tom Sheánín ... Maureen the daughter of Tom the son of Shauneen) a tradition that is alive and well in Gaeltacht areas to this day.

With every Irish household having a child named for an adult in the house, there had to be a way of telling them apart and the usual solution was to add a suffix to the little one's name. The most common were the Irish suffixes for:

How traditional names in Gaelic were interpreted

Irish Gaelic remained stubbornly relevant in a variety of settings at a local level but the records we comb through today are not a true representation of our ancestors' personal reality. In a home where native Irish was spoken, children were called by the traditional Irish names they were given and not the alias we see on civil, legal, or church records. How come a search for Sinéad in the 1901 Census of Ireland draws a complete blank? Had the name completely fallen out of fashion? Or was it merely disguised by the fashion in which records were kept?

Much of the confusion actually began with the Roman Catholic tradition of recording baptisms in Latin (those very Italian-looking first names). How Old Irish / Gaelic names were recorded varied according to the priest (even within the same parish) and with that, the variety of aliases that confound us today were born.

When it comes to 19th-century records it is worth bearing in mind that a forename in baptism and marriage records could vary.  As would how a parent/godparent was recorded over the course of a lifetime.

In too many cases, a one-translation-fits-all approach was used for a range of unrelated Gaelic names that shared a phonetic or two. In the same way that Irish-language surnames and placenames were garbled in English, this first-name anomaly can leave us drawing a complete blank in our research.

One of the biggest challenges can be following a name from one civil record to another. Especially in the case of a name we know should be turning up on Irish Genealogy but isn't. Paid sites offer a workaround on this with the "similar names" option, but many have yet to fully recognise how the most ancient first names were disguised or mistranslated.

To see how Latin baptisms influenced the various English-language aliases that may arise in 19th-century records, check out the following index:

When an Irish Surname appears as a First name

Have you ever noticed an Irish Surname appearing on record as a first name? While a Nial O'Neil or Brian O'Brien was not unheard of, what do we make of a Farrell Bryan or Carbery O'Brien then?  A clerical error or something to do with patronymics?

Indeed, most Irish surnames with a Mac or O prefix originated from the given name of an ancient Gaelic ancestor. Many traditional Gaelic boys names survived well into the early 20th century. How they evolved often differs greatly from their surname counterparts, however. Understanding how these given names were interchanged with Latin and English aliases too can really help break down brick walls in our research.

Sometimes how an Irish given name was pronounced is also a big clue as to its county of origin. And how it was disguised or spelled reflects this hidden clue.

Let's take a look at Feargal Ó Gallachóir (1813-1885) of Cionn an Doire near Stranorlar, Co. Donegal

It is only with an understanding of the Donegal (Ulster dialect) pronunciation of Fergal as "Ferrigal, Farrigal or Farrigle"  that we can find him:

Please go to our dedicated "Irish Nicknames" Message Board Thread to post your query or add suggestions.  All volunteers welcome!