Registry of Deeds - A Repository of Wills & Land Transactions

Written and researched by the team at the Registry of Deeds Index Project Ireland, this article highlights the importance of the registry of deeds records and the value they offer anyone doing family history research in Ireland.Set up in the early 1700's as a way to limit the land ownership and leasing opportunities of Catholics, the information collected can be of huge research to anyone researching people or places. 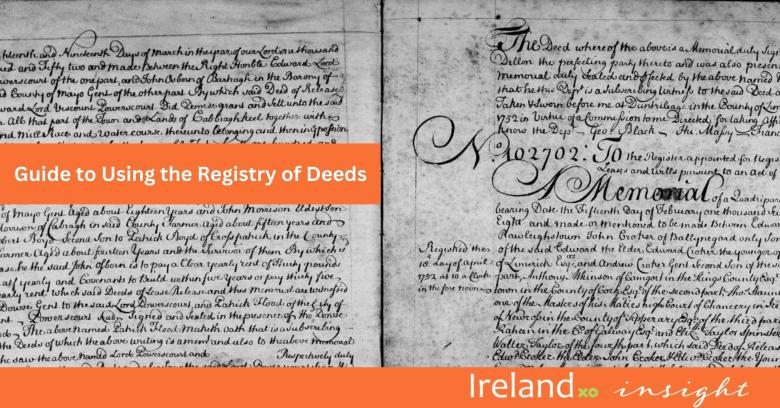 The importance of the Registry of Deeds is built on the fact that it is a repository holding memorials of deeds and wills that mention the names, ages, life events, places and family relationships of people involved in land and financial transactions from the mid-1600s to the present day.

The number of names mentioned is huge. Prior to 1832 there were about 600,000 deeds registered and each deed had at least two parties and two witnesses. This means there were a minimum of 2.4 million names in memorials registered before 1832. Some deeds can have many parties and many other names mentioned. Marriage settlements typically have four or five parties who might be two or more people.  Many deeds are the result of finalising estates after the death of a person. These will often mention widows and other people related to the deceased.

The roles people have in deeds include being:

FAQ: WHAT IS A MEMORIAL

The legislation setting up the Registry required that a memorial was written on parchment and was signed by at least one party to the deed and at least one witness to the original deed. The memorial was a copy of the deed. The memorial can be anything from a verbatim copy of the deed to a broad synopsis setting out the main features but somewhat light on details such as considerations and lives.

FAQ: WHAT IS A DEED

A deed is an agreement in writing and can take several forms. The parties to a deed (or their legal representative) usually held their part of the deed.

The main forms of deeds you see are indentures and deeds poll. Indentures are deeds written a number of times on one piece of parchment which is then cut into parts using a wavy cut so that each party gets a corresponding piece. A party can prove they are a party to the deed as their piece can be reassembled into the one piece. Generally, each party represented a separate interest in the deed. A party could be one or more people and a person could be one or more parties. A deed poll is written out once and kept by the recipient. It has no horns like a poll Hereford bull. Original deeds were retained by the parties to the deed or their legal representatives.

FAQ: WHAT WAS THE LIFE OF A DEED

Most leases these days are of fixed duration. In the 1700s and 1800s the duration of many deeds was contingent of the lives of some nominated people. Registered deeds tended to have three lives as one of the prohibitions for ownership of Roman Catholics was holding land for three or more lives. The form of the duration in the deed would be – during the lives of the said John Smith, his son James Smith aged about 7 years and William Smith the son of Thomas Smith of the city of Dublin. The lives were often relatives of the grantee or grantor. When a premisses was sublet the resultant deed would inherit the lives from the head lease. The deed might also allow the renewal of lives. This means that a new life would be added to the lease's duration. The substitution of a new life might involve a fine or facilitation payment. The fines could range from a peppercorn to large sums of money. Failure to pay the fine could lead to the lease being terminated. Sometimes, the lease would be renewable for ever meaning the lease was in perpetuity. Sometimes, royal lives were used as the first nominated lives in a deed.

In most instances the rent was fixed for the duration of the lives. This tended to mean that the nominated lives were of younger people. Often a child aged between 5 and 10 was included to try and maximise the length of the lease. The limerick Chronicle of 22 July 1826 reported 'On the 4th instant, at Shewsbury, Colonel William PEACOCKE, aged about 90 years. By his death several extensive tracts of land are out of lease'. In this case there may have been no rent increase for over eighty years. On the day the death was announced Sir Joseph PEACOCKE advertised several lands in County Limerick for lease.

FAQ: WHAT INFORMATION CAN BE SEEN ON SETTLEMENTS

FAQ: HOW TO USE MEMORIALS OF DEEDS

Many memorials of deeds give a history of tenure, sometimes going back over 100 years. This record provided proof of ownership and lists previous tenants and landlords. The records at the Registry of Deeds start with memorial No 1. Grantor – Nafan COOTE, Earl of Bellomont; Grantee – Connell VERECKER, Esq of Ballinscalla, Co Limerick (he signed the memorial) it was a lease and release dated 26 March 1708 (the second day of the year); and involved the lands of Stephenstown, Ballinscaula, and Fanningstown, barony of Coshlea, county Limerick (near Kilmallock) for lives of Connell's brother Henry and eldest son Henry

For some people you can get a fairly comprehensive story through the registered deeds they were involved in.

Edward CROKER son of Andrew CROKER and Elizabeth TAYLOR is one such story.

Thomas Swan CROKER who worked as a clerk in the Customs House in Dublin from 1794 until about 1830.

FAQ: HOW DO I USE THE SITE

Like a lot of family history research serendipity plays a big part in whether you find gold or other gems in the Registry of Deeds. The above examples show what is possible with luck. The purpose of the Index Project is to making finding these gems easier and make up for the limitations of the Registry of Deeds own indexes – grantor's index and townland index.

FAQ: HOW CAN I CONTRIBUTE TO INDEXING