Many of those who served in the First World War (1914-1918) were connected to Ireland by birth or descent.

As our Kiwi and Oz cousins commemorate all lives lost in military service and conflict worldwide this Anzac Day... we invite you to bring the memory of your Great War Irish ancestor home by adding their name and story HERE. 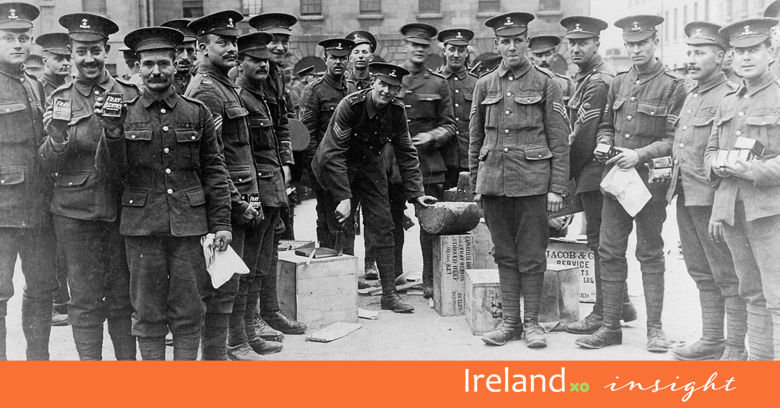 Anzac Day (25 April) marks the anniversary of the WWI campaign that led to major casualties for The Australian and New Zealand Army Corps (ANZACs) at Gallipoli in 1915. What began back in 1916 as a remembrance of all the lives that were lost at Gallipoli, has since grown into a significant event that incorporates WWII and commemorates all those involved in conflict and military service.

The Irish at Gallipoli

Troops from many nations and ethnic groups were involved in the Gallipoli landings – including African, Australian, British, Canadian, French, Ghurka, Indian, Irish, Maori, New Zealand, and more. Two out of every three men fell during the landings.

As Ireland did not have its own separate army, Irishmen from all backgrounds volunteered to fight in Irish regiments, brigades, and divisions from all over the British Empire.

Among the force of Allied troops and marines dispatched to Gallipoli were: The Royal Dublin, Royal Inniskillin, Royal Munster Fusiliers, and the 10th Irish Division of the British forces. Many of the Dublin Fusiliers were killed as they waded ashore, others badly wounded drowned.

An estimated 3-4,000 Irish died at Gallipoli in 1915. In terms of Irish WWI casualties, Gallipoli was second only to the Battle of the Somme in terms of gravity.

This historic event was a coming of age for Australia and New Zealand in the world's eyes. Among the ANZACs were many recent immigrants from Ireland. According to Jeff Kildea, an estimated 6,600 Irish-born men and women served in the Australian Imperial Force. How many more were the sons and daughters of earlier waves of Irish immigration?

Whatever generation of Irish descent your ancestor was, we invite you to add them to our  Irish Diaspora roll-call for veterans.

Was WWI remembered in Ireland?

Back in 1914, Ireland was on the verge of securing Home Rule when the Great War broke out.

Whether regular army or volunteers, the Irish showed remarkable fortitude, and their countless stories of exceptional bravery were rarely given the recognition they deserve.

Jack Campbell from Dublin joined the British army because he wanted to follow his brothers and "see the world". Encouraged by the recruitment officer to lie about his age, he signed up to The Royal Dublin Fusiliers, 16th Irish Division at the age of 16. Gassed at the Somme, he was the only one of 5 brothers to survive.

Lots of military records have now been digitized.

The Irish Military Archives has a repository of personnel files, as well as several other collections of interest to those researching their family history. However, it does not hold records relating to military service prior to 1922. If your relative served during World War I, or at any point up to 1922, it is likely their service was with some of the Irish Regiments of the British Army.

Their online collections include the following;

Within Divisions of the British Army, the following Irish Regiments were involved:

Many old barracks in Ireland are still extant and have publications and websites about their particular history.

WWI Memorial Sites in Ireland honor the names of a community's loss to the Great War. Having a memorial where one could pay one's respects was so important – especially with so many having no known grave. Raised by public subscription, many of these Irish memorials take the form of

Finding branches of one's family tree touching upon military service in more than one country's armed forces is a common theme in Irish genealogy.

Do you have stories to share? Whether your ancestor was Irish-born or of Irish descent we invite you to bring their memory home to Ireland.  No matter where they served or what conflict they were involved in, if your ancestor was born more than 100 years ago we'd love if you added them to our Ancestors Roll-call for veterans.

So many Irish names were memorialized far away from Ireland and the personal stories behind them are so important. Whether they were born in Ireland or abroad, we'd love it if you brought their memory home and reconnected them to our "special group" for Military Ancestors.

To reconnect and discover more...

WATCH Our webinar on how to add and reconnect your ancestor to a building in Ireland here: