How do I go about digging up my ancestor's burial records? What can I expect to discover? What death records are online?

Answers to these questions and more here... 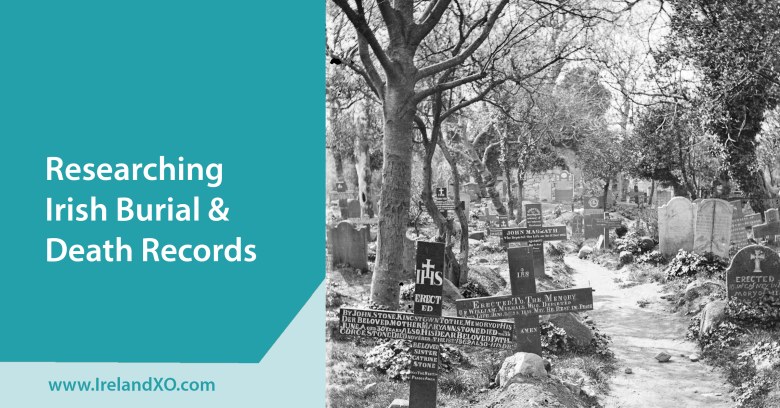 In Irish genealogy, death and burial records form an important part of our quest to discover more about our ancestors and where they came from. As more and more records are coming online, now's a good time to take a fresh look at that brick wall from the past. Volunteers are uploading new headstone photos and transcripts by the day. The Irish government has made civil records and Catholic parish registers freely available online. And countless charities are preserving and digitizing local records that may be the only remaining tangible piece of evidence of a life lived in Ireland.

So what can we expect to find? Of course, knowing the date and age at death quickly narrows our window of research for other vital records (albeit in historical records, age should be taken with a grain of salt). With Irish death records, an address (particularly a townland address) opens the door to discovering one's ancestral place of origin.

Unlike death certificates overseas, Irish death records do not record the names of parents and place of birth. What they can tell you, however, was who stayed around / inherited the land by way of the person named present at death (e.g. a son or daughter who inherited the farm, or lived at home or nearby). While surnames may have changed through the years, all it takes is a local volunteer to help you confirm if someone in the area knows more. For help and advice at any stage of your quest, ask our Local Volunteer MESSAGE BOARD.

FAQ#1 How do I find death records in Ireland?

Civil registration of deaths in Ireland began on 1 January 1864 and these records are held by the General Register Office (GRO).  Following partition in 1921, records for counties Antrim, Armagh, Derry, Down, Fermanagh, and Tyrone are kept at the General Register Office of Northern Ireland (GRONI) which includes all records for these counties from 1864.

Prior to 1864, the only record of death would be church burial registers (and for those who could afford it – newspaper notices or memorial inscriptions).

However, for the monied class, probate records and will calendars are a helpful resource.

For our early ancestors, burial records are as important as gravestones and can provide vital information. Save for the Quakers (who adhered to their own burial grounds) any all other Christian denominations may have been buried together.

To be buried among one's ancestors was more important than one's religious denomination and even a Catholic ancestor's burial may have taken place in the church grounds of the "established" parish church i.e. the Church of Ireland.  In many cases, the "established church" stood on the site of the pre-Reformation Christan church and its burial grounds were historically significant to the local population.

With the Penal restrictions on Roman Catholic record-keeping in the 18th and early 19th century, it is important to check the local Church of Ireland Burial Registers for record of Catholic burials.

Where possible it is advisable to look at burial records in tandem with headstones.

FAQ#3 How accurate or reliable are gravestone dates?

A year of birth or death on a gravestone can generally be accepted as accurate (unless you have reason to question to doubt it).  However, the older the headstone, the chance of the age at death being inaccurate increases. The following possibilities should be considered:

The year of death on a gravestone can also prove unreliable in cases where the memorial was erected some years later. Reasons for this include:

An obituary or other reference in a newspaper can often clear up innacuracies.

FAQ#4 How do I find out when an ancestor died in Ireland?

Newspaper Obituaries are a particularly helpful starting point. Even those elusive ancestors who would not have afforded a death notice or obituary may turn up in the news if they died by misadventure (e.g. being killed by a bull).

Comparing census substitutes such as the Tithe Applotment and Griffith's Valuation Records can reveal a holding passing on to the next generation. If your ancestor appeared on record in Griffith's Primary Valuation, the Griffith's Cancellation Books (reviewed every decade or so) can provide circumstantial evidence of death (property being transferred to the name of a widow or child) up until 1970.

Church Registers are likely to have burial records for urban parishes, but for the poorer Catholic parishs in rural Ireland no burial records were kept in the 18th and 19th century.

Gravestone or Headstone Transcriptions are proving invaluable thanks to volunteers. Here are some of the main sites:

A large supply of old gravestone inscriptions (from all over Ireland) can also be found in journals published by the Association for Memorials of the Dead. Published over a century ago, they may prove helpful with older gravestones that have since become too weatherbeaten to be legible.

FAQ#5 How do I find where my ancestor was buried in Ireland?

Whether a grave marker exists or not, there most certainly was an ancestral burial ground worth seeking out to connect with.

It was vitally important to be buried among one's kin in Ireland and this means that your search should not be limited to burial grounds within their parish of residence. They may have traveled some distance to return to an original point of origin where grandparents and older generations were interred.

If you have not found your ancestors in the parish where an obituary says the funeral occurred – burial in an ancestral family plot is likely the reason why.

Unfortunately, Irish Civil Death Records do not record place of internment. So your best bet would be to search Irish newspapers online for death and funeral notices.

Where a burial record does appear in Catholic parish registers, the graveyard name can be found following the word puella or sepultus / sepulti (Latin for buried). For help figuring out the location of a burial ground, ask our MESSAGE BOARD.

FAQ#6 Would my ancestors have been able to afford a headstone?

Those who could afford to leave clues for their descendants went to great pains to do so (not only investing in tombstones but also in newspaper obituaries). This is particularly true in the case of landowners, the gentry, and merchants in Ireland as well as those who left these shores.

But what about tenant farmers, or blacksmiths for example? Between the generations, family fortunes very often dwindled (through farm subdivision for example) or improved (a family member overseas sending funds home) so it is always worth keeping an open mind. In many cases, a headstone was erected retrospectively, when Penal laws relaxed or when finances allowed.

In the 18th century, Ireland’s expanding economy led to more disposable income for the middle and the lower classes, one result of which was an increase in burial headstones for Dublin’s artisan and working classes.

More than ever local knowledge is key here as not every member of the family was afforded a marked grave.

Famine burial grounds can be found across Ireland, but given the calamity of the time, no grave markers can be expected and next to no burial records were kept. ​

FAQ#7  How do I confirm if a record is my ancestor?

Found a headstone, burial or death record online that you believe might be that of an ancestor or relative?

The quickest way by far to clear up any doubt is to ask our local volunteers for help.  GO TO Local Volunteer MESSAGE BOARD.

Whether your ancestor was born in Ireland or abroad, we invite you to #Bring TheirMemoryHome by adding their name (and headstone or photo if you have one) HERE...