Many Irish family histories start with the arrival of an immigrant on foreign soil in the 19th century. In the 1800s travellers were more likely to be recorded at their port of entry rather than their port of departure and although the information gathered may have been limited, passenger list archives can give vital clues as to where the people hailed from in Ireland, and also about who they were travelling with, or who they were travelling to.  Official departure passenger lists exist from 1890. Read on to find out more about using passenger lists to research your Irish family history. 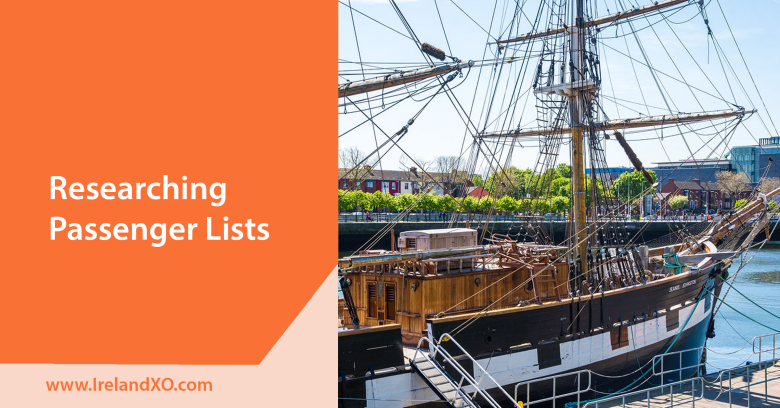 Official passenger lists from Ireland only exist from 1890 and they are held in the Board of Trade records (reference BT27) in the National Archives, Kew, London (www.nationalarchives.gov.uk). Now digitised and indexed (at www.ancestry.com and www.findmypast.com) these lists name 24 million long-haul passengers who left from 35 ports in the United Kingdom (which includes the Republic of Ireland until partition in 1921) between 1890 and 1960. On finding a passenger of interest, you can then download and print the passenger manifest.

These passenger departure lists, from 1922, record the address in Ireland of all embarking passengers; prior to this the only clue to family origin was either ‘Nationality’ (i.e. Irish, Scotch, English) or ‘Country of Last Permanent Residence’.

In the USA, official arrival records of immigrants were kept from 1820. Ancestry’s ‘US Immigration Collection’ (www.ancestry.com) contains indexes to passenger lists of ships arriving from foreign ports to Boston from 1820 to 1943 (3.8 million immigrants), Philadelphia, 1800 to 1945 (1.6 million), and New York, 1820 to 1957 (83 million). Information contained in the index includes: given name, surname, age, gender, ethnicity, nationality or last country of permanent residence, destination, arrival date, port of arrival, port of departure and ship name. Furthermore, the names found in the index are linked to actual images of the passenger lists. The ‘US Immigration Collection’ also names 16.3 million passengers arriving in the UK (from foreign ports outside of Europe) between 1878 and 1960; 8.4 million ‘unassisted’ immigrants to New South Wales, Australia from 1826 to 1922 and 450,000 ‘assisted’ immigrants to New South Wales from 1828- 1896; and 7.3 million passengers arriving at Canadian ports between 1865 and 1935.

A database of published arrival records to North America in the 17th, 18th and 19th centuries has been compiled in the Passenger and Immigration Lists Index. This index to 4.5 million immigrants who arrived in United States and Canadian ports from the 1500s can be accessed in the ‘US Immigration Collection’. The Immigrant Ships Transcribers Guild has transcribed over 17,000 passenger lists on their website www.immigrantships.net. By the mid-19th century, 70% of Irish emigrants entered the US through New York. ‘The Port of New York Passenger Records 1820 – 1957’ database contains the passenger lists of almost 65 million immigrants, passengers, and crew members who came through Ellis Island and the Port of New York from 1820 to 1957 and these can be searched, free of charge, at www.libertyellisfoundation.org/passenger.

Passenger departure lists naming Derry emigrants have been extracted from four different sources for the years 1803-1806, 1833-1839 and 1847-1871, and published in three books (and in one CD, Irish Immigrants to North America) by the Genealogical Publishing Company (www.genealogical.com).

Thanks to Brian Mitchell and our colleagues at the Tower Museum, our Volunteer Partners,  for providing this article.

Email genealogy@derrystrabane.com for more information about your Northern Irish ancestry