Searching for your Northern Irish Ancestors: A Three-step Guide 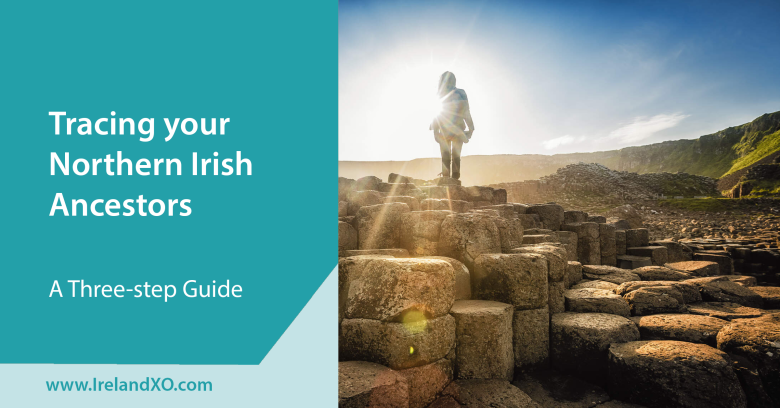 There are 289 parishes in Northern Ireland (i.e. Counties Antrim, Armagh, Down, Fermanagh, Londonderry and Tyrone). You can identify the civil parishes of Northern Ireland, and their associated townlands, at www.johngrenham.com/places/civil_index by selecting county of interest on the map. To gain insight into the economic and social landscape of 19th century Ireland you can consult A Topographical Dictionary of Ireland, published in 1837, by Samuel Lewis which is arranged in alphabetical order by parishes, towns and villages.

An excellent starting point for surname research is the ‘Surname Search’ option at www.johngrenham.com/surnames where you can explore the location, frequency and history of Irish surnames.

Although census enumerations were carried out every decade from 1821, the earliest surviving complete return for Ireland is that of 1901. The census enumerations of 1901 and 1911, arranged by townland in rural areas and by street in urban areas, can be searched, for free, at www.census.nationalarchives.ie. These returns will list the names, ages and place of birth of all members in a household.

Northern Irish Civil Records of births 1864-1920, marriages 1845-1921 and deaths 1871- 1921 can now be searched and viewed at www.irishgenealogy.ie. On searching index, which returns name, event type, year and name of Superintendent Registrar’s District, a pdf of the full register page in which that birth, marriage or death certificate appears can be downloaded by selecting ‘image’.

RootsIreland, at www.rootsireland.ie, is a good starting point for searching church registers of baptisms, marriages and burials as this website is the largest online source of Northern Irish church register transcripts. You can either search across all counties or search a particular county. For example, Derry Genealogy, at www.derry.rootsireland.ie, has transcribed and computerised the early baptismal and marriage registers of 97 churches (38 Roman Catholic, 24 Church of Ireland and 35 Presbyterian) and gravestone inscriptions from 117 graveyards. As the search facility on this website is very flexible it means that you should be able to determine if any entries of interest to your family history are held on this database. It must be stated, however, that a failure to find relevant birth/marriage entries in this database doesn't mean that the events you are looking for didn't happen in Ireland. It simply means that they are not recorded in the database; for example, they may be recorded in a record source that doesn't survive for the time period of interest or in a source that has not been computerised. Microfilm copy of church registers can be examined, at no charge, in the Public Record Office of Northern Ireland in Belfast. Their Guide To Church Records, which can be accessed on their website at https://www.nidirect.gov.uk/publications/proni-guide-churchrecords, lists, in alphabetical order by civil parish, church registers of all denominations for most parishes in Ulster and their commencement dates, together with their microfilm reference details.

Quite often the only realistic strategy in tracing ancestors beyond church registers (which are the building blocks of family history) is to examine surviving census returns and census substitutes, often compiled by civil parish, for any references to a surname or given name of interest. There are a number of census substitutes – such as 1630 Muster Roll, 1663 Hearth Money Rolls, 1740 Protestant Householders Lists, 1766 Religious Census, 1796 Flax Growers Lists, early-19th century Tithe Books and mid-19th century Griffith’s Valuation – which can be searched to confirm the presence of the family name.  The problem with these sources is that they name heads of household only; hence they provide insufficient information to confirm the nature of linkages between named people in these sources. Census substitutes, however, are very useful in confirming the presence of a family name in a particular townland and/or parish, and in providing some insight into the frequency and distribution of surnames.

You can examine the mid-19th century Griffith’s Valuation at www.askaboutireland.ie/griffithvaluation and 1796 Flax Growers’ Lists at www.failteromhat.com/flax1796.  The early-19th century Tithe Books for Northern Ireland can be viewed by searching PRONI's e-catalogue at https://www.nidirect.gov.uk/services/search-pronis-ecatalogue; select ‘Browse’ button and enter FIN/5/A in the search box. The Tithe Books are catalogued alphabetically by parish name and they can be searched at townland level within each parish by selecting the appropriate digital view. They are not indexed by the householder's name.  You can search a number of 18th-century census substitutes for Northern Ireland, such as indexes to pre-1858 wills, 1740 Protestant Householders Lists, and Religious Census of 1766 in ‘Name Search’ archive at https://www.nidirect.gov.uk/information-and-services/searcharchives-onl…. At www.ancestryireland.com/scotsinulster you can search, by surname, the Flax Growers Lists of 1796, the Protestant Householders Lists of 1740, the Hearth Money Rolls of the 1660s, and early-17th century Muster Rolls for Northern Ireland.

Email genealogy@derrystrabane.com for more information about your Northern Irish ancestry