Did your Irish ancestor marry in Ireland? If so, the clues hidden in Irish marriage records can unlock the door to your deepest Irish roots.

Found a marriage record that presents more questions than answers? Discover how to interpret them, what's hidden in the detail, and more in this handy guide. 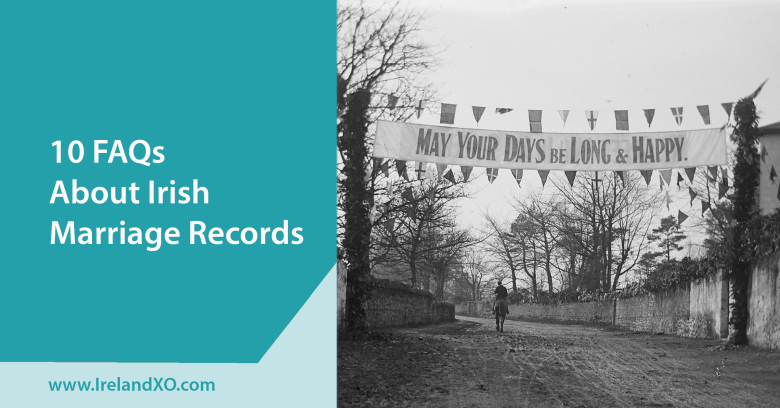 Among all the records we might hope to see on our Irish family history quest, a glimpse at the marriage of both ancestors probably tops the list.

As a genealogical resource, marriage records in Ireland are highly valuable. For your family timeline, this key date not only defines the generation that followed but opens the door to discovering more about where they came from.

While Catholic and Protestant marriage in Ireland shared early Christian teachings on the sacrament of marriage the following differences in record-keeping should be noted:

Whether you are just getting started or finding a record hard to decipher, this guide covers the most frequently asked questions and more.

FAQ#1 How far back do marriage records go in Ireland?

Prior to 1864, church records are virtually the only direct source of records

You may need to refer to local records and archives as well as national sources. To learn what's available in your ancestral parish or county...

FAQ#2 What can Irish marriage records tell me?

Marriage records in Ireland differ somewhat from what we may be used to overseas. How much information you can glean from them will depend on the type of record and the period it was recorded in. In Irish genealogy, the two main types of marriage record are:

Parish registers may be the only evidence of a couple's existence in 19th-century Ireland. Best used in tandem with the baptism records of a couple's offspring, the information within parish marriage records will be limited to:

Civil Marriage Records in Ireland contain far more clues for the family historian, but only for ancestors who wed after 1864.*

Got a question about an Irish marriage record? Finding a record or entry hard to decipher?  We're here to help.

ASK OUR Local Volunteer Message Board

FAQ#3 How do I find civil marriage records in Ireland?

In order to narrow your search, it helps to know which Civil Registration District Office(s) applied to your ancestor and our volunteers are waiting to point you in the right direction.

ASK OUR Local Volunteer Message Board

FAQ#4 How do I find church marriage records in Ireland?

Most surviving Irish parish registers have been immortalized on micro-film images. To help you navigate them (and avoid endless scrolling) well-transcribed databases are a must-have, and here are two of our favourites:

To learn what's available in your ancestral parish or county...

FAQ#5 How do I read old handwriting?

Old handwritten records can be tricky to read, especially when that vital clue seems illegible. Technology is here to help with transcriptions.

Catholic Marriages (in rural Ireland especially) were recorded in Latin and this too can present additional challenges in deciphering an entry.

The "Italian" in the family

Some Catholic priests recorded the first names of all parties in Latin. As many traditional Gaelic given names didn't have an official Latin or "Christian" equivalent, each priest had his own creative way of addressing that challenge.  SEE Old Irish First Names & Aliases

In both cases, it helps to ask a local volunteer who is familiar with the local record sets and names. For help deciphering old handwriting in Irish records ...

FAQ#6 What does "consanguinati" mean

Consanguinity & Kin: From 1835 marriage between kin (in-laws) was made void by law. Catholic dispensation sometimes ignored the laws of the land, and such marriages in violations of this Act made the children "illegitimate".

The Latin term consanguinati on a marriage record indicated that the couple was blood-related (for which a special dispensation was required by the church). In those instances, the degree of kinship was also noted:

Irish marriage certificates listed the ages of both the bride and groom as either "full age" or "minor".

A person of "full age" (having reached the "age of majority")* is legally an adult.

A  “minor” needed the consent of a parent/ guardian to legally wed.

FAQ#8 What was the minimum age for marriage in 19th-century Ireland?

As the age of the bride and groom was not recorded, confusion often follows when other vital records don't match up:

In many cases, we start out with an idea of an ancestor's age from a census or death record overseas then find a possible marriage record in Ireland, but the wedding date suggests your ancestor would have been 14 years old. Was that possible? How do I prove or disprove that?

The age may not have been reported accurately in census and death records, so it helps to cross-reference birth/baptism records where possible.

While there was no statutory minimum age in Ireland (prior to the 1972 Marriages Bill) women in Ireland did not marry before they were capable of bearing children.

To make an educated guess, understanding the structure of Irish rural society before and after the Great Famine (1845-51) is key. The aftershock of the Famine changed the traditional age of marriage dramatically.

FAQ#9 How do I work out the year of marriage?

Most of us researching 19th-century Irish ancestors start out not knowing what year they were when they married in Ireland. To narrow down your window of research, an approximate year of marriage can be worked out by making an educated guess from:

When a marriage took place pre-1864, how can we guesstimate when a parish register is riddled with gaps and omissions?

Whatever the way the records turn up, anecdotal evidence can inform how you proceed, depending on the period of research:

Before the Great Irish Famine

After the Great Irish Famine

FAQ#10 What hidden clues can I find in Irish marriage records?

A female witness was always recorded under her maiden name (regardless of marital status). Before the famine, the witnesses were likely to be siblings and siblings-in-law.

Catholic priests often recorded the "stipend" paid to the priest in the righthand column of the marriage register. A stipend of 0/0 is a tell-tale sign that the parent(s) were poverty-stricken and "pauper" was sometimes noted on the record. The rapid flight of the peasantry overseas following the Great Famine affected the income of Catholic priests, so fees were raised after the 1850s.

Banns (the announcement of a couple's intention to marry) were used by all Christian churches in Ireland as a way of preventing an illicit marriage.

People wishing to obtain a license to marry without having banns called were required to enter into a bond with the bishop of the diocese. Marriage licences (granted by the ecclesiastical courts of the Church of Ireland) survived the Public Record Office explosion of 1922 and record Protestant marriages from 1623 – 1886.

Who were your Irish ancestors? Share their marriage details to their home parish and county to discover more...

Early footage of an Irish Wedding