You don’t have to physically visit Ireland to experience some of the heritage and cultural experiences that the country has to offer. Many Irish museums have “opened their doors” to the world by offering virtual tours of their physical spaces, allowing viewers to ‘walk’ through the corridors and experience the museums from their homes. Here you will find a selection of some of Ireland’s best-known museums and public spaces, all with something different to offer and all available to you to browse virtually, and for free. 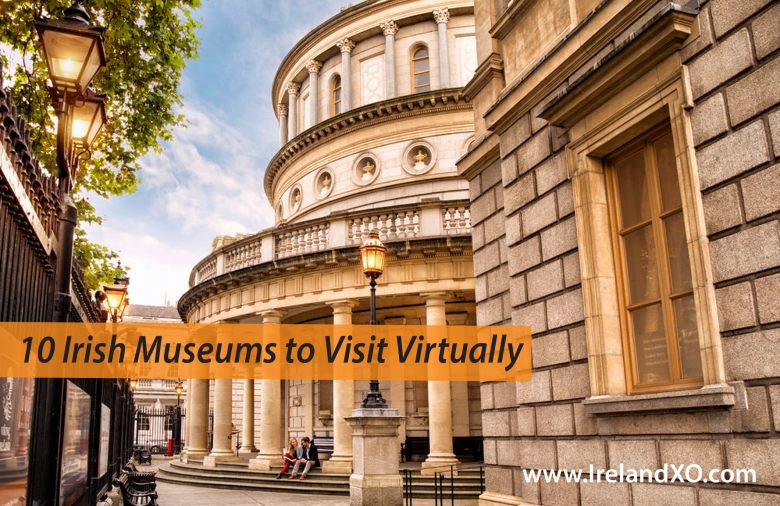 Scroll to the bottom to see our new additions for 2021

Described by Lonely Planet as ‘not just the best museum in Ireland but one of the best in Europe’, the Chester Beatty is the pre-eminent Irish museum promoting the appreciation and understanding of world cultures with holdings of manuscripts, rare books, and other treasures from Europe, the Middle East, North Africa and Asia. Once the private library of Sir Alfred Chester Beatty (1875 – 1968), a successful American mining engineer, collector and philanthropist, the Chester Beatty is also today a research library for scholars from all over the world.

The Natural History building was built in 1856 to house the Royal Dublin Society’s growing collections, which had expanded continually since the late eighteenth century.  The building and its displays reflect many aspects of the history and development of the collections. It was originally built as an extension to Leinster House, where the Royal Dublin Society was based for much of the 19th Century.

The museum exhibits more than ten thousand specimens in its galleries. These represent only a tiny fraction of a collection that is estimated at about two million scientific specimens. Specimens are laid out in two main areas of the building, the Irish Room on the ground floor and the World Collection on the upper floors. This virtual tour of the Natural History building includes two balconies that are currently closed to the public following a safety review.

The Irish Room in The Natural History Building

The Long Room is located in Trinity College, in the heart of Dublin City. The Long Room is the main chamber of the Old Library and is filled with 200,000 of the Library’s oldest books and is one of the most impressive libraries in the world.

This library was built between 1712 and 1732. It is filled with approximately 200 000 books. It is lined with marble busts of the great philosophers and writers.

Click on the video to visit the Long Room

4. Reading Room at the National Library of Ireland

The National Library of Ireland on Kildare Street was founded in 1877. It helps to collect and make available the collective memory of the Irish nation at home and abroad, caring for more than ten million printed, visual and manuscript treasures. From fourteenth century Gaelic manuscripts to the papers of Yeats and Joyce and the works of contemporary Irish writers, the NLI is a key repository of Ireland’s national literary heritage. It is also the guardian of personal histories in the form of vast archives of letters, photographs and diaries.

Also, for those interested in Ireland's poets, have a look at this interactive online exhibition of a National Library of Ireland exhibition entitled the Life and Works of W.B. Yeats.

The National Gallery of Ireland in Dublin boasts some 2,500 paintings and approximately 10,000 other works in different media including water colours, drawings, prints and sculptures. Every major European school of painting is extensively represented. It also houses a renowned collection of Irish paintings, the majority of which are on permanent display.

The National Museum of Ireland – Archaeology, Kildare Street, first opened its doors in 1890. It is the national repository for all archaeological objects found in Ireland and home to over two million artefacts. You’ll find artefacts dating from 7000BC to the 20th Century exhibited in seven galleries. The Treasury exhibition space has been reopened after a major refurbishment where you can see iconic artefacts such as the Ardagh Chalice , the Tara Brooch and the Derrynaflan Hoard, plus the Faddan More Psalter exhibition.

The National Museum of Ireland - Archaeology

The award-winning Medieval Museum is situated between Cathedral Square and the Bishop’s Palace in the heart of the Viking Triangle in Waterford City. The medieval museum incorporates the 13th century Choristers’ Hall and a 15th century wine vault taking visitors back to the great age of faith and chivalry and is a tribute to medieval life in Waterford. The museum galleries feature some of the great treasures of medieval Ireland and Europe, including the unique 4 metre long illuminated Great Charter Roll of Waterford (1373) as well as the sumptuous cloth-of-gold vestments (1460).

The Great Charter Roll of Waterford

Opened in 1991 to celebrate Dublin's status as European Cultural Capital for that year, Number Twenty Nine Fitzwilliam Street is a moderate dwelling, three bays wide, with a frontage of 28 feet, and a depth of nearly 50 feet. It was first occupied in 1794, during by Mrs Olivia Beatty, the widow of a prominent Dublin wine merchant. Visiting the exhibition gives a chance to experience what life was like for the fortunate who lived in such elegant townhouses, and the less fortunate who worked in them. The furniture, glassware, ceramics, and paintings on display are mostly Irish from the late 18th century or early 19th century. To meet the rising demand of an expanding Dublin, manufacturers of luxury goods prospered in the city.

EPIC The Irish Immigration Museum in Dublin is an interactive experience located in Dublin, Ireland's Docklands. The exhibit will allow you to discover the stories of Irish emigration from early times to the modern day.

Titanic Experience Cobh is located in Casement Square in the heart of Cobh Town. Its home is the original White Star Line Ticket Office, a building steeped in history dating back to the early 19th century and the departure point for many thousands of White Star Line passengers.

The Pop-Up Museum showcasing 100 years of Women in Politics and Public Life marks the centenary of the introduction of voting rights for women in Ireland. The exhibition’s first venue in 2018 was The Coach House at Dublin Castle and it was successfully adapted for new venues. The physical exhibition successfully toured across the country – to Limerick, Donegal, and Roscommon – with new items of local significance showcased at each location. The exhibition illuminated and celebrated the stories of very familiar and less well-known pioneering women, who have contributed significantly to Irish political life and public service.  Every one of these women contributed to our national story in so many ways, sometimes with little acknowledgment or appreciation within their lifetimes.

Iveagh House in Dublin city, the headquarters of the Department of Foreign Affairs and Trade, has many stories within its walls. Explore the nooks and crannies of its beautiful architecture and artwork on this virtual tour. Trace its history – from one of the original residences on St. Stephen’s Green South to being gifted to the State in 1939 by the Guinness family. It has a rich architectural development – Georgian, neo-Georgian to Victorian. Ireland’s diplomatic activities have been coordinated within this unique and treasured structure for the last 80 years.
To activate the tour, double-click on the video that begins to play when you launch the link. You can also enable audio to accompany the tour, and move at your own pace with the help of the on-screen arrows.

Over to you: share this article with your network by using the social media icons at the top of the page

Every county on the island of Ireland has a wealth of museums, heritage centres, and cultural spaces to visit. Not all of them have Virtual Tours available but many have websites and online resources that you can browse. Head to our Local Guide page to find out what has been added to your County of origin. If you know of a local museum or place of interest that is not mentioned, why not add it to the Local Guide by clicking on the orange 'Add to guide' button? All additions are moderated by IrelandXO and we aim to publish the entry within 72 hours.