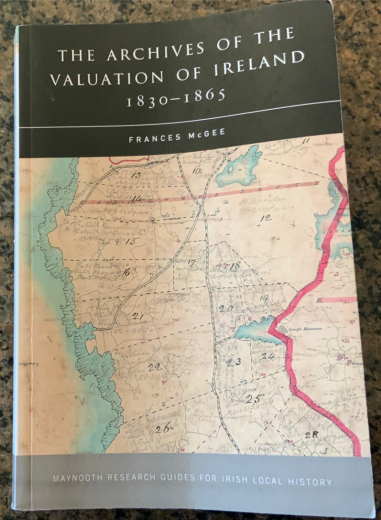 Whoa! Meticulous! Fascinating! Displaying the inherent skills of her career as an archivist, Frances McGee recounts in infinite detail, the complex and ever changing 40-year efforts of Richard Griffith to establish a sound  and equitable taxation base for the entire country of Ireland. He succeeded! So did McGee.

Working through some 12 distinct formal legislative acts (under three different sovereigns) of the British Parliament, Richard Griffith carefully crafted detailed processes and specific sets of instructions for his valuators and surveyors as they walked the length and breadth of the country. First, he established the formal boundaries of every townland, parish and barony in his capacity as Boundary Surveyor. Then, as Commissioner of Valuation, he assembled teams of valuators and surveyors to set a tax rate for every townland over 60,000 jurisdictions). This became the initial Townland Valuation.

But first, he needed effective maps of the country. With no major wars underway, he was able to secure the services of the British Army Royal Engineers to develop a set of Ordnance Survey Maps with a large scale of 6 inches to the mile. They triangulated the entire island in short order.

Upon copies of these maps, the surveyors and valuators captured their field measurements and observations. The “field books” were sent to Dublin and used to determine the tax rate based on the quality of the soil, and the price of corn.

Initial testing of Griffith’s processes was completed in Derry in 1830. Then, further valuations proceeded in the north. However, it 1838, the Poor Law legislation was enacted, spurring yet another independent survey to provide a taxation base to pay for the hundreds of workhouses being erected across the country. Much maligned, this patchwork survey was eclipsed by Griffith’s work and Griffith was assigned a new model for his work – the Tenement Survey in 1842, replacing his Townland Survey which was then only partially complete.

Now, Griffith willingly recorded much more information, including tenant names, rents, measurements of houses, etc. The new approach produced eventually, the Primary Valuation or more commonly known as Griffith’s Valuation which served the country as the taxation base for over 130 years – an astounding achievement of major proportions.

McGee recounts the phases, steps and missteps of this complicated history, documenting the “What” and “Where” of the massive (over 30,000) number of documents produced and still extant. She describes how  these “books” and maps were created, updated, printed stored and preserved.

With an eye for the researcher and genealogists, McGee constantly reinforces her work with thousands of interesting examples that might prove helpful to future researchers. We are given the counts of the various documents and how they are organized. The Appeals are particularly interesting with the many examples.

Up until now, the primary “bible” for researchers using Griffith’s Valuation data has been James Reilly’s 2000 work, “Richard Griffith and His Valuation of Ireland”, ISBN 0-8063-4954-9. Now, we have a new Bible which clearly surpasses in value this previous yet still valuable work. A round of applause for McGee!