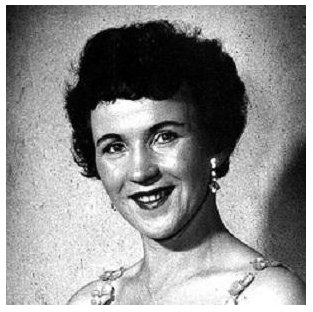 Bridie Gallagher, "Ireland's first truly international pop star" was born in Creeslough on September 7th, 1924. She had enjoyed worldwide fame with songs such as A Mother’s Love’s A Blessing and The Green Glens Of Antrim. and achieved international acclaim with her legendary rendition of "The Boys From County Armagh"which sold over 250,000 copies.

Affectionately known as "The Girl from Donegal" during her career, which spans over six decades, she appeared in many leading venues across the globe. She also made songs such as "The Homes of Donegal" famous. Bridie started her singing in the Creeslough Hall with a local Ceili Band. The Creeslough Hall was owned by Jim Mc Caffrey and Bridie would make many more visits to the Creeslough Hall in her home town throughout her long and successful career.

Her singing career took off in the 1950s when she began to make appearances in the London Palladium and the Royal Albert Hall. She holds the record for the largest number of people in attendance in the Albert Hall London, with over 7,500 people in attendance. Ms. Gallagher’s singing was said to have melted the hearts of millions — especially the Irish diaspora. She carried out a number of tours in the United States, Canada, Europe and Australia. Bridie had her own radio show on RTÉ. As well as many appearances on television.

The people of Creelsough held an event in 2000, which celebrated her career. Members of her family from Creeslough and Donegal attended the event along with her two sisters and their families who travelled from Glasgow to be there, and an estimated 2500 fans also attended this event. A plaque paying tribute to her was unveiled.

Bridie was also honoured by Donegal County Council at a Civic Reception in 2000. She died on January 9th, 2012 at her Belfast home and is buried in her native Creeslough.