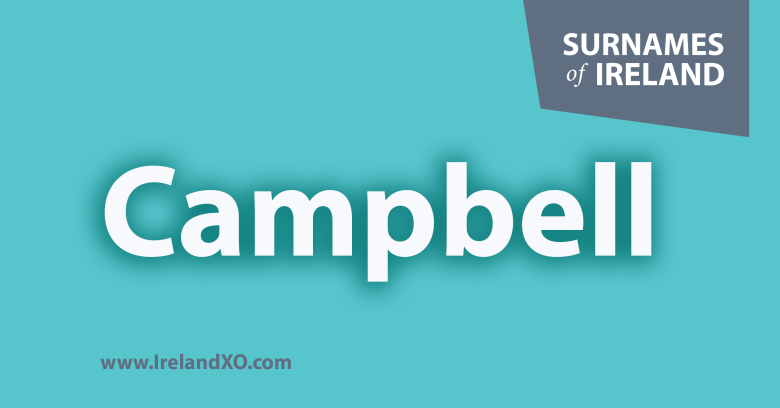 Campbell is an extremely popular and widespread name in Ulster where it is the fifth most common name. It is the third most numerous name in County Down, fourth in County Armagh, seventh in each of Counties Antrim, Derry and Tyrone and thirteenth in County Donegal. The majority of Ulster Campbells are descendants of 17th century Scottish settlers but there are significant local differences.

Where Does the Last Name Campbell Come From?

Most Ulster Campbells descend from Scottish clan Campbell who rose rapidly to power in Argyll in the western Highlands of Scotland in the 17th century at the expense of the MacDonalds, ‘Lords of the Isles’. Inveraray Castle on the banks of Loch Fyne became the principal seat of the Campbells, the Dukes of Argyll, in the 15th century. In the 18th century the Campbells were loyal supporters of the English crown in their struggles with the Scottish Jacobites.

Originally known as Clan O’Duibhne the first to assume the surname Campbell was Gillespic O’Duibhne who, in 1263, was recorded as Gillespic Cambel. The surname is derived from Scots Gaelic Caimbeul, meaning ‘crooked mouth’

In 1609 Robert Cecil, the Earl of Salisbury and also Lord High Treasurer, suggested to James I a deliberate plantation of Scottish and English colonists on the forfeited estates of the Gaelic chiefs in counties Armagh, Cavan, Donegal, Fermanagh, Londonderry (then known as Coleraine) and Tyrone. Settlers to Ulster came, by and large, in three waves: with the granting of the initial leases in the period 1605 to 1625; after 1652 and Cromwell’s crushing of the Irish rebellion; and finally in the fifteen years after 1690 and the Glorious Revolution. It is estimated by 1715, when migration to Ulster had virtually stopped, the Scottish population of Ulster stood at 200,000.

In Donegal, in particular, many Campbells will have an even earlier connection with Scotland.  In the 15th century a branch of Clan Campbell, known as Mac Ailin, derived from ail, meaning rock, were brought to Donegal by the O’Donnells to fight as galloglasses (other spelling forms include gallowglasses, gallowglas or galloglas), i.e. mercenary soldiers. As well as Campbell their name was also anglicised to McCallion.

Campbells Who Have Marked their Surname in History

As well as numerous Scottish immigrants of the name many Campbells, especially in County Tyrone, will have Irish origins. The Campbell sept of County Tyrone trace their lineage to Eogan, son of the 5th century High King of Ireland, Niall of the Nine Hostages, who ruled from the Hill of Tara, County Meath. Eogan and his brother Conall Gulban conquered northwest Ireland, ca.425 AD, capturing the great hill-fort of Grianan of Ailech in County Donegal which commanded the entrance to the Inishowen peninsula between Lough Swilly and Lough Foyle.

Campbell, in Gaelic Mac Cathmhaoil, is derived from cathmhaol, meaning ‘battle chief’. This name was initially anglicised as McCawell, and also as McCampbell and McCamphill. The Campbells of Tyrone were the leading sept of Clan Ferady (tracing their descent from Faredach, son of Muireadach (Murdock), son of Eogan). At the height of their power in the 12th century, from their base at Clogher, they controlled a large portion of County Tyrone and had penetrated deep into County Fermanagh. They were one of the seven powerful septs supporting O’Neill.

Alexander Campbell; American religious figure and a leader of the Restoration Movement

This surname history has been researched and written by Brian Mitchell. Brian has been involved in local, family and emigration research in Derry and North West Ireland since 1982. The database whose construction he supervised, containing one million records (dating from 1628 to 1930) extracted from the major civil and church registers of County Derry, can now be accessed at www.derry.rootsireland.ie. Brian can be contacted by email at genealogy@derrystrabane.com.