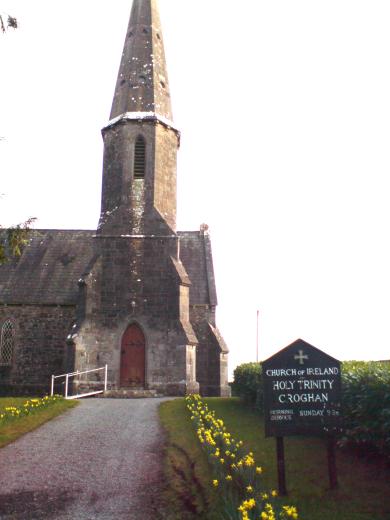 This small but picturesque Protestant church is situated on an elevated and picturesque location near the site of the medieval parish church of Dromyn. Holy Trinity Church was built in 1862 in the "Old English" style of ecclesiastical architecture at a cost of £1,200. The church consists of a nave and chancel and, at the time of erection, had free sittings for 200 people.  Previous to this, the parishioners of the Established Church here attended service at Estersnow.

The chancel window, of beautiful stained glass, is a memorial to Guy Lloyd Esq. (1803-1860) of Croghan House who granted the site and laid the foundation stone. Lloyd had passed away before the consecration of this church in April 1862. [The Irish Builder: 1 May 1862, pg 12].  His remains are interred in a vault beneath the church.

(Local children believe to this day that the church is haunted by his ghost!)

It is said that the church bell here was cursed by Croghan's parish priest Fr. Peter C. O’Connor because of its interference with Catholic mass nearby. O'Connor fearlessly took on Guy Lloyd for Catholic rights in the 1850s).

The graveyard and surrounding space were tastefully laid out and planted. Its graveyard markers feature the names of Protestant strong farmer families who have endured in the parish since that time.

For the latest updates in headstone markers in Co. Roscommon, see