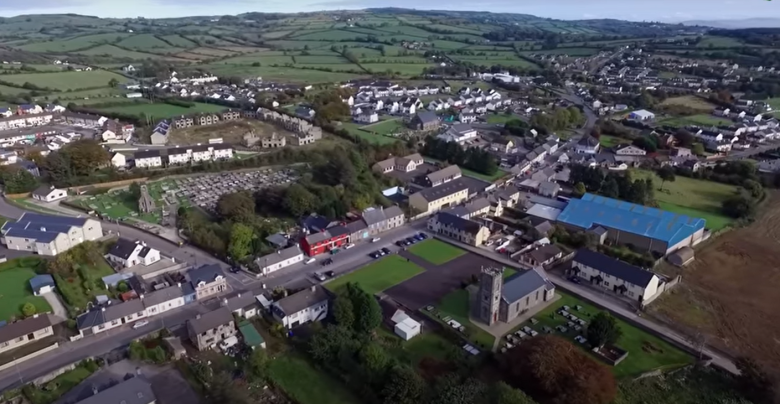 Convoy is a town in the east of County Donegal, in the Finn Valley district. The Town had a total population of 1,526 according to the 2016 census.  The Irish for Convoy is Conmhaigh, or "plain of the hounds". It is part of the Barony of Raphoe South. It is situated on the Burn Dale (also known as the Burn Deele) and is located on the main R236 road to Raphoe.

Like many other towns in the vicinity, it has its origins in the Plantation of Ulster. It is home to a mixed religious community which is reflected in the schools and churches in the town. There is a Catholic and a mixed primary school in the town. There is also a Catholic church, a Church of Ireland church and a Free Presbyterian Church of Ulster Church. There is also a Reformed Presbyterian Church in Ballyboe. There are no secondary schools in Convoy and local children tend to travel to Raphoe or to Stranorlar for thier second-level education.

The Burn Dale is a burn (a small river) that flows along the southern edge of Convoy. Convoy once had a Woollen Mill located on the banks of the Burn Dale, but this closed in the early 1980s with the loss of many local jobs. The woollen mill is now host to a business area that was promoted by the former state development body FÁS.

Naomh Mhuire Conmhaigh is the local GAA club. Founded in 1928 the players of this Gaelic football club come from the villages of Convoy, Drumkeen and Raphoe with the pitch located in Convoy. The club has won several junior titles. Convoy near Donegal GAA's "centre of excellence" training facility at Milltown.

Convoy has a local amateur soccer team, known as Convoy Arsenal. The club were Donegal Junior League winners in 2003, won the Division One title in 2004, and were runners-up in the premier division in 2005. Convoy Arsenal subsequently joined the Ulster Senior League in 2005. They also field teams in the Donegal Saturday League in several underage grades.

www.donegalgenealogy.com - The Parish of Convoy

www.johngrenham.com - The Parish of Convoy