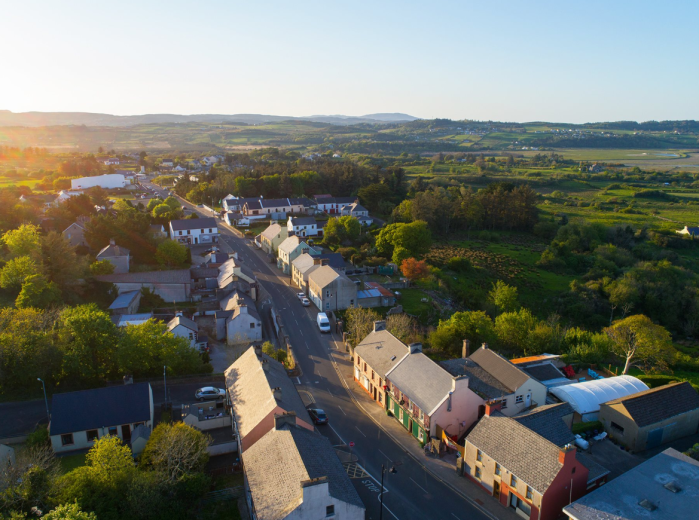 Creeslough in the Parish of Clondahorky

Creeslough is situated at the foot of Muckish Mountain, near Sheep Haven Bay in northwest Donegal. It is 10Km from Dunfanaghy and stands on high ground overlooking an inlet that runs in off Sheephaven. The Irish word Creeslough means "The Belt of Lakes" - a reference to the many lakes that surround this charming village.The parish church, St Michael's is notable for its architecture, being modelled on the nearby table mountain of Muckish.

Creeslough is a rural town. In the past it was mainly the centre of business for all the surrounding people, with big family's on small farms - rearing sheep and cattle, growing corn and potatoes. Most families were self-sufficient with their own garden of vegetables, cabbage, carrotts, onions, lettuce, turnips, etc. with their own milk and butter, chickens and pigs. The main items to be bought in the shop was tea, sugar, flour and salt. The biggest outlay for the year was paying the rent.

Today it is less dependent on Farming and more geared to tourism and family owned businesses with many local entrepreneurs. The Creeslough Fair, The Creeslough Hall, The Creeslough Co-op, and The Creeslough Railway Station were at the centre or activity for many years but alas have all being confined to history.

The famous songwriter Percy French became a constant visitor to Creeslough –one of many artists, poets and authors of the day who spent holidays there, often together. There was G.K. Chesterton, George Russel (A.E.), Stephen Gwynn, W.B. Yeats, Standish O’ Grady, James H. Cousins, and many more, a unique gathering og literato in a wild, country parish in north Donegal. They were attracted by the beautiful, rugged landscape of mountain, bog, forest, lake, river, sea and strand and were the pioneers of a tourist industry in the area that had grown over the years.

The branch of Lough Swilly railways that linked Letterkenny with Burtonport from 1903 until 1941, ran through Creeslough. A viaduct was built to carry the train over the broad valley of the Owencarrow river. The worst accident in the history of the Lough Swilly Railway happened on this viaduct on Friday 31st January, 1925.

The Lough Swilly Train left Derry as usual at 5:30 p.m. on this fateful day with 13 passengers, 8 goods wagons and 2 bread vans. The driver was Mr. Robert Mc Guinness, the fireman was John Hannigan and the guard was Neily Boyle. It left Letterkenny at 7:05 p.m. with about 36 passengers on board. As the Train approached the Owencarrow Viaduct a strong gale was blowing, the train driver slowed down to 10m.p.h. but the gale was so strong that it blew the carriage nearest to the engine off the rails. The roof was ripped off and four passengers dropped forty feet to their death. They were Philip and Sarah Boyle from Arranmore Inland, Una Mulligan from Falcarragh and Neil Duggan from Meenbunowen Creeslough.

The fireman John Hannigan ran three miles to Creeslough to raise the alarm. The local doctor Dr. Charley Coll and newly ordained priest Fr. Barney Gallagher attended the dead and injured. Lots of local people helped out. Six of the injured were taken to Letterkenny Hospital. At the inquest the Jury recorded the bravery of two men James "The Post" Mc Fadden Kilfad and Pat "Paddy Rua" Mc Fadden Terlin who rescued two women from a carriage hanging by it's chains.

The last passenger train journey from Letterkenny to Burtonport took place on June 1941. A permanent record of this journey, in the form of a colour film, was made by Fr. Thomas Doherty (later Archdeacon Doherty P.P., Donegal Man of the Year, 1985). Excerpts from the film were included in the Archdeacon’s television programme shown on RTÉ in 1985. The film reveals what a wealth of scenic beauty was to be viewed by passengers on the old railway.

Nearby attractions to Creeslough include, Doe Castle, a 16th century castle of the MacSuibhne clan, which has been restored during recent years. It is perhaps best known as the place to which Owen Roe O'Neill returned prior to the uprising of 1642. Also you have Ards Forest Park contains some megalithic tombs and a Mass Rock and which is adjoined by a Franciscan Friary. It has an area of 4.8 square kilometres.

What will you do when you get here!?

Did you know that Donegal is the only county in Ireland that has thirteen Blue Flag beaches to its name?

And that three of them, Marble Hill, Killahoey and Downings, are less than 10 minutes drive.

From little coves like Lady Isabella’s beach at Ards Forest Park Friary to the vast expanse of Marble Hill beach there’s a different beach for each day of the week on our doorstep.

However, if your type of relaxing involves a bit more get up and go then there is no shortage of things to do while you’re here.

Here are 8 places to visit for free around Creeslough:

*There are a number of free entrances to the 1,200 acre park but you’ll need €5 to park in the main car park.

Here are 3 places to visit for a small fee around Creeslough: